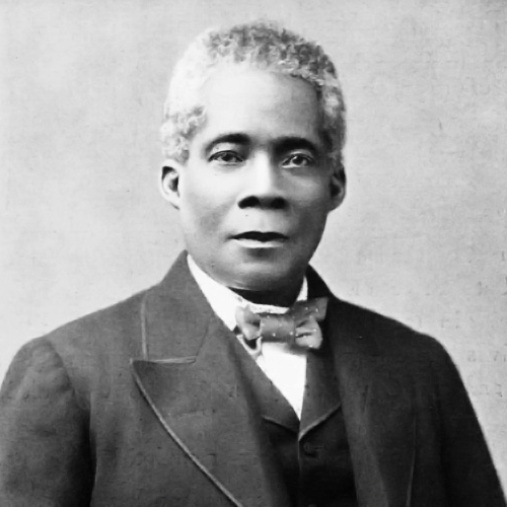 History, according to Robert Penn Warren (a poet, novelist, and literary critic), cannot give us a program for the future but it can give us full understanding of ourselves and our common humanity, so that we can better face the future.  Professor J. Corfield also pointed out   in her article that revisiting a country’s history, helps us to understand the linkages between her past and present.  Understanding a nation’s History   is not just 'useful', it is essential (royalholloway.ac.uk).

Understanding Liberia’s history for example, will   help us to re-build our socio-economic and political institutions, and as may well be necessary, also to change those behaviors that are not congruent to nation building. What we have become today in Liberia, is the result of   the seeds that were planted by Liberia’s founding fathers, many, many years ago; founding fathers that failed to heed the advice and wisdom of a visionary personality. 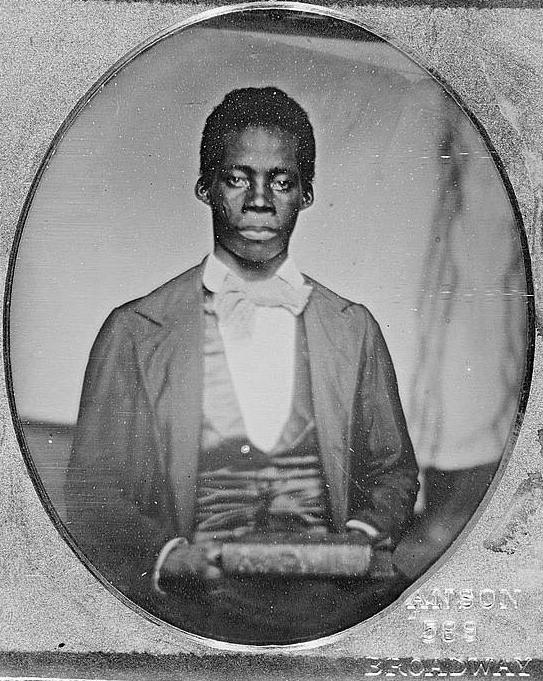 Liberia mimicked white rule from their arrival in 1822 in several ways, and became “proxy whites” through the prism of culture (Feagin, 2009). Claims to whiteness were tied to diaspora status and cultural affect, as well as one’s place on the scale of colorism or shadism. Joseph

Jenkins Roberts and other Americo-Liberians at the time, took pride in their American-ness, and saw themselves as above the Indigenous Africans (Laidlaw, 2012), due to the language, religion and methods of industry that they had 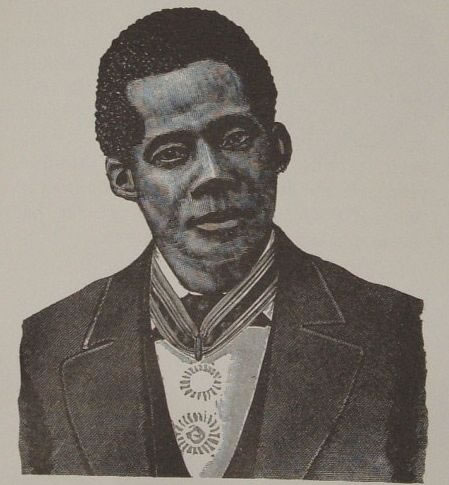 collectively brought with them (McCall, 1956), reproducing white supremacist hierarchies (Mills, 2014). One could argue that antebellum racial politics were transferred to Liberia through the colonized minds of the freed slaves, with the racism they had experienced being reproduced through their oppressed minds (Feagin, 2009), as well as the colorism that had developed among slaves in the US which had stopped them working together to escape (Whittaker, CERS Working Paper,2015).

Irrespective of the misguided mindsets of Liberia’s founding fathers as reflected above, Liberia was blessed at the time with the presence of a man of honor and vision. God, in His infinite

wisdom, gave Liberia a certain man during her initial inception as a sovereign nation. The following poem highlights such a man of honor.

"God, give us a Man! A time like this demands

Man, whom the lust of office does not kill;

Man, whom the spoils of office cannot buy;

Man, who possessed opinions and a will;

Man, who had honor;

Man, who stood before President Joseph Jerkins Roberts and others

And damn their treacherous flatteries without winking!

Tall man, sun-crowned, who live above the fog

In public duty and in private thinking;

For while the rabble, with their thumb-worn creeds,

Their large professions and their little deeds,

Edward Wilmot Blyden (1832-1912) was that man. He was a Liberian educator and statesman. More than any other figure, he laid the foundation of West African nationalism and Pan Africanism. He was born in St. Thomas, Virgin Islands, on Aug. 3, 1832, of free, literate parents. He went to the United States in May 1850 and sought to enter a theological college but was turned down because of his race. In January 1851, he emigrated to Liberia, (biography.yourdictionary.com/edward-wilmot-blyden).

On July 27, 1857, he was Liberia’s Independence Day Guest Speaker in Monrovia. He spoke on the following topic: Liberia As She Is; And the Present Duty Of Her Citizens. 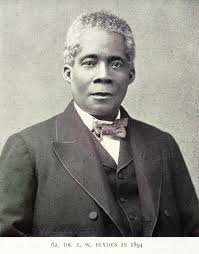 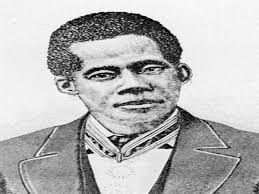 The highlight of his presentation is reflected below for the intellectual consumption of the reading public. Interestingly, some of the ‘evil attributes’ that he spoke about, continue to

Liberia as She is; and the Present Duty of her Citizens.

“What are the moral causes of the present evils in Liberia? … … as a people, we have been in too much haste to be rich. Relinquishing the pursuit of those attributes that would fit us for the faithful discharge of our peculiar duties as men, as Liberians, as an infant nation, we have used every possible measure to enhance our pecuniary importance; and in the precipitate efforts at wealth, we have not been careful as to what means we have employed. The desire to be rich, or to appear to be rich, pervades all classes. The love of money…has grown upon us to such a degree that all other avenues of distinction seem but trifling in comparison of those which lead to the acquisition of money. To be rich seems with many “the chief end of man”. Hence, no talents, no endowment of the mind, no skill or knowledge, no amount of education, is appreciated only so far as it will pay…. This fact has operated greatly in retarding the literary progress of our youth….

Another cause of our adversity may be seen in the unjustifiable extravagance in which we indulge; in that luxury of expenditure for houses, for dress, for furniture, for food, constantly made the reprehensible remark by thinking foreigners. We are in dreadful error regarding our country, if we suppose we are truly prosperous. Our prosperity is not real; it is false; it is fictitious. The prosperity of a nation is real when the springs of the prosperity are contained within itself, in the hands of its citizens; when it depends for its existence upon its own resources; when it is independent. But this is not the case in Liberia. We are, as a nation, upheld by foreigners. We are entirely dependent upon foreigners for our schools, for churches, for preachers, for teachers. Most of the talent of the country is in the employ and at the control of foreigners. Those thus employed must ever hold their talents and their efforts subservient, not to what they conceive to be the interests of their country, but to the desires and direction of foreign employers…. What we wish to bring before our minds today is the humiliating fact, that nearly all the talent of Liberia—talent not in ordinary men, but in our principal men—is supported by foreign means and controlled by foreign influence. And yet, in the face of these humbling realities, we boast of our civilization, of our prosperity, of our independence, and indulge in unjustifiable extravagance… * * * … the money lavished upon houses, which add nothing to health and comfort; upon dress, which does not increase the dignity and beauty of personal appearance; the large sums laid out in expensive furniture, … the great amount consumed in the luxuries of the table would go a great way in keeping our streets clear of weeds, in felling the dense forests around us, in reclaiming the wilderness, in cultivating the soil, in civilizing our … brethren. … Look at the numbers who … to advance to, or maintain this [extravagant] style of living, flock to the fostering arms and sheltering wings of these [foreign] societies. Thus dis- honesty stalks abroad under the semblance of piety; and impiety assumes the appearance of religion for the sake of gain. And … this extravagant manner of living…are made in the minds of many the standard of respectability…we attach more importance to display than to reality. There is very little that is substantial about us…  It is our duty to learn that there are other objects of infinitely greater importance than wealth in our rising country…A higher destiny is ours: our duty and privilege is the laying of the foundation of future empires in Africa… … It is our duty to curtail our superfluous expenditures. There should be retrenchment of our expenditures for splendid edifices….

Let our surplus means be beneficially expended; let it be vested in the improvement of our country, in placing our prosperity upon a safer and more permanent foundation—in rendering ourselves independent… … It is our duty to labor. We dwell in a country rich in resources, which with little exertion can be called forth in sufficient variety and abundance to render us comfortable and independent. But there is a fatal lack of productive industry among us…. The commerce of the country has always been in such articles as our citizens have had no part in producing; hence we acquire wealth from this source without helping to create it. We purchase the palm oil and camwood and ivory from the natives giving them in exchange articles of foreign production ….

The prosperity arising from our commerce is almost as evanescent as that based on missionary appropriations. Foreigners on the one hand, and the natives on the other, are our supporters. * * * … we must either abandon our state of utter dependency upon foreigners, by creating the means of supplying our own wants, or relinquish our profession of liberty as a nation. A state of dependency is entirely incongruous with a statue of liberty…. …The…rich and fertile soil…invites us to its cultivation. Nothing should be allowed to interfere between us and the soil…(Blackhistoryheroes.com).”

I was moved with sadness   upon reflection of the content of Edward Wilmot Blyden’s   speech, relevant to the prosperity of our nation: “Our prosperity is not real; it is false; it is fictitious. The prosperity of a nation is real when the springs of the prosperity are contained within itself, in the hands of its citizens; when it depends for its existence upon its own resources; when it is independent. But this is not the case in Liberia. We are, as a nation, upheld by foreigners. We are entirely dependent upon foreigners for our schools, for churches, for preachers, for teachers. Most of the talent of the country is in the employ and at the control of foreigners…”

The legacy of Dr. Edward Wilmot Blyden has challenged every Liberians, especially those seeking the highest office, to help Liberia live up to her true potential as a sovereign African nation.  Liberia’s past, even the relatively recent past, is, in the minds of most of us, shrouded by mists and only very vaguely perceived. Interestingly, some of the ‘evil attributes’ that he spoke about, continue to take place   in contemporary Liberia. Let us endeavor as Liberians to foster the spirit of true national reconciliation, and embrace all Liberians, be it Americo-Liberians, Mandingoes or Krahns , for Liberia belongs to us all.

Indeed, our ignorance of the past is not the result of a lack of information, but of our indifference to its lessons. Our view of history shapes the way we view the present, and therefore it dictates what answers we offer to solve our current socio-economic or political  problems.

The Author: Mr. Edmund Zar-Zar Bargblor is an Educator. He is a graduate of Cuttington University, Liberia; Howard University, Washington, D.C, and Israel Institute of Technology, Haifa, Israel. He can be contacted at: [email protected]

Spread the loveBy now, most people have read the story END_OF_DOCUMENT_TOKEN_TO_BE_REPLACED