Adedibu’s son, 30 others escape death in near plane crash- Tribune 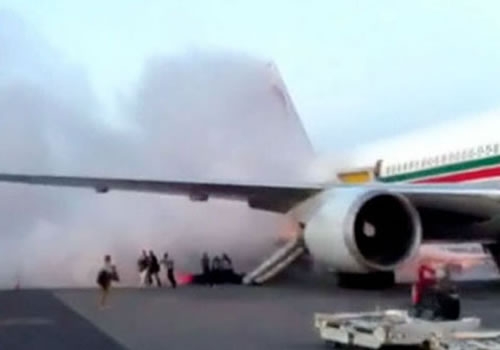 About 31 passengers, including the son of late strongman of Ibadan politics, Alhaji Lamidi Adedibu, Senator Kamoru Adedibu, were hurriedly evacuated from an aircraft at the Nnamdi Azikiwe International Airport, Abuja, on Friday, after the plane caught fire shortly before take-off.

The plane, an Overland Airlines aircraft, scheduled for Ibadan from Abuja at 4:52p.m. was about to take off when it started emitting smoke from one of its engines.

One of the passengers who spoke with Saturday Tribune, Olufunmilayo Rotiba, Chief Executive Officer, Special Travels and Tours, said the about 31 passengers of the plane were already seated before the incident.

“We first observed that engineers were frantically fiddling with the plane’s engine. Then we suddenly saw smoke.  It is not funny at all. All of us, including a senator, rushed out of the plane.

“We were subsequently evacuated by airport officials. As I am speaking with you now (8:30p.m.), we are waiting for another plane from Ilorin, which we have been promised will take us to Ibadan. We thank God,” she said.

Senator Adedibu described the incident as a horrible experience but thanked God that it did not happen mid-air.

He commended the pilot, the crew and airport officials for being observant and for the prompt rescue operation.

He also confirmed that all the passengers were still at the Abuja airport at 8:45p.m. when Saturday Tribune spoke with him.

Previous Post Lamido Sanusi Opens Up, Jonathan goes after him, Senate to probe him.- Premium Times, Tribune
Next Post Sarakis battle for the soul of Kwara as Gbemisola, APC, CPC leaders decamp to PDP