Lamido Sanusi Opens Up, Jonathan goes after him, Senate to probe him.- Premium Times, Tribune 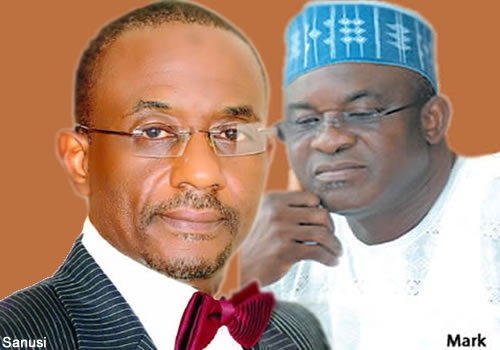 THE Senate will, next week, debate a motion seeking a probe of the Central Bank of Nigeria (CBN) over indications that the apex bank has spent over N240.2 billion without appropriation between 2009 and 2013.

The motion, being sponsored by the chairman, Senate Committee on Rules and Business, Ita Enang, was contained in the Senate Notice Paper, which was originally to be taken on February 5, the day the Senate adjourned to enable its members to participate in the registration exercise of All Progressives Congress (APC).

Details presented by Senator Enang, as contained in the notice paper, indicated that the CBN spent over 240.2 billion on intervention projects between 2009 and 2013, whereas the projects were not authorised and appropriated for.

The document also indicated that only three of the 21 projects embarked upon by the CBN were certified by the Bureau of Public Procurement (BPP), in accordance with the Fiscal Responsibility Act.

In the motion, Enang noted that sections 22(1) and 23(1) of the CBN Act mandated the apex bank to operate a general reserve fund to which it shall allocate one-fifth of its operating surplus.

The Act, according to the motion, also mandated the bank to pay the balance of its operating surplus to the consolidated Revenue Fund of the Federal Government not later than one month, following the statutory deadline for publishing each corporation’s accounts.

The motion also indicated that the surplus shall be classified as a Federal Treasury Reserve.

The motion further stated that the CBN apparently ran foul of the Act setting it up, which assigned to it some basic functions.

The motion, therefore, asked the Senate to ascertain the mandate its committees of Finance, Judiciary, Human Rights and Legal Matters had to conduct a public hearing on the loss of revenue into the Consolidated Revenue Fund of the Federation through evasion of the Fiscal Responsibility Act, acting against and beyond the mandate given by law to the agencies, breach and evasion of public procurement laws and regulations, among others.

Long before his shocking letter to President Goodluck Jonathan exposing massive diversion of government oil revenues became public December 2013, Nigeria’s Central Bank Governor, Sanusi Lamido Sanusi, said he did what many have accused him of failing to do: acting early as the losses escalated.

Accompanied by all of CBN’s deputy governors sometime in 2010, he said he drove to the Nigerian National Petroleum Corporation, NNPC, to ask for an answer to a simple math: why Nigeria’s reserves had failed to rise in the face of unprecedented high oil prices internationally.

Mr. Sanusi said NNPC official lectured his team that the trouble arose because much of Nigeria’s oil production came from deep offshore wells; and that the Sani Abacha government had scandalously agreed with oil companies to peg such oil earnings at $10 dollar per barrel — the prevailing price at the time. The arrangement was fixed to run for 30 years.

Officials of the corporation explained that only the Petroleum Industry Bill, PIB, the voluminous government-sponsored oil sector reform legislation, could reverse that agreement, according to the governor.

But while he obtained a legal opinion from a Senior Advocate of Nigeria, SAN, debunking that claim and demonstrating the contract can be re-negotiated without the PIB, Mr. Sanusi said he and his colleagues however shifted focus to other possible avenues of revenue leakages.

In the years that followed, they established how government fuel subsidy had been massively abused, and how the Pipelines and Product Marketing Company, PPMC, had sustained a notorious racketeering in the administration of the government’s oil swap deals- an arrangement in which Nigeria gives out crude oil to foreign companies in exchange for refined product.

“By 2011, it was already clear to us that these transactions were not properly structured, monitored and audited,” the CBN governor wrote in a comprehensive submission to the Senate Finance Committee, obtained exclusively by PREMIUM TIMES.

“For example, companies in swap agreements with PPMC would lift crude oil for free, sell at the international market, repatriate the funds and sell at the autonomous rate, trade with the proceeds and at their own time, establish letters of credit (LCs) to import PMS using the funds purchased at the official window.”

In one shocking revelation, the PPMC signed oil swap agreements with companies with a clause allowing the destruction of vital documents after one year. Mr. Sanusi called the clause “troubling”, and said on account of that, he did not believe an ongoing, but separate attempt by the National Assembly to probe the swap deals, will yield any result.

At multiple meetings with lawmakers, the CBN governor said he raised the alarm on the findings, particularly about the subsidy fraud, long before the House of Representatives and the federal government finally, in 2012, launched investigations that proved grounding fraud in excess of N2 trillion.

But Mr. Sanusi’s biggest haul yet as part of his team’s investigation, is his allegation that the NNPC, Nigeria’s state-run oil behemoth, has for years, illegally diverted several billions of dollars of oil revenues to unknown accounts, through a systematic practice that defrauded the nation of over 70 per cent of its due oil proceeds.

The scandal, first exposed in his first letter to Mr. Jonathan, has shocked Nigerians, but has barely received sufficient action from the government.

On Tuesday, at a meeting of the Senate Finance Committee which is probing the missing funds, Mr. Sanusi revised his earlier claim that nearly $50 billion was missing, and insisted that while part of that amount had been accounted for, as much as $20 billion (N3.3 trillion) – more than half of Nigeria’s entire budget this year- remains unaccounted for.

The ministry of finance and the NNPC claim unreconciled amount stands at $10.8 billion, while, the NNPC claims the outstanding $10.8 billion was paid out as subsidy on kerosene and petrol, and the balance was used for pipeline maintenance.

But Mr. Sanusi’s submissions to the Senate committee, obtained by PREMIUM TIMES, offer a firm argument on why the $10.8 billion claim is untenable, and challenges the NNPC’s claim that the outstanding $10.8 billion was used as purported.

While the government, as well as the CBN, have admitted the total crude oil lifting from January 2012 to June 2013, stood at $67 billion, Mr. Sanusi said only $47 billion of that amount was paid into government coffers.

Of that total, the CBN said only $47 billion had been paid into the government’s account, leaving a balance of $20 billion.

Mr. Sanusi said the NNPC’s claim that 80 percent of the $10.8 billion was incurred on petrol and kerosene subsidy should not be accepted since a presidential directive had in 2009 barred payment of subsidy on kerosene.

The directive, from former President Umar Yar’adua, remained in force long after the president’s death, Mr. Sanusi said, citing a letter to him from the Petroleum Products Pricing Regulatory Agency, PPPRA, in December 2010- long after Mr. Yar’adua’s death- which confirmed that the agency had “ceased to grant subsidy on HHK(kerosene) through a presidential directive since July 2009”.

“This may explain why NNPC waited till 2011 to claim its ‘arrears’ for 2009-2011,” Mr. Sanusi wrote. “So the first question here is: on what basis did NNPC pay itself billions of dollars as ‘subsidy’ for kerosene, in view of this directive.”

On petrol subsidy, the CBN governor said documents showed the NNPC did not make any deductions from the domestic crude sales for subsidy payment between April 2012 and 2013. In the document attached as appendix, the row showing “adjustment for subsidy” consistently shows “NIL” within the period.

Mr. Sanusi said there are two possibilities here: either the NNPC was lying to the government that it was not making deductions, or it is now lying that is made when it never did.

“Either way, this shows we cannot trust NNPC or its management to tell us the truth,” he said.

Part of the missing $20 billion, is a $6 billion worth of crude which the NNPC said it lifted on behalf of the NPDC, the upstream operating arm of the NNPC. Mr. Sanusi said the amount involved should constitutionally belong to the federation account by has been methodically diverted into private hands.

The two companies involved are Seven Energy and Atlantic Energy. The CBN said it found out the two companies are owned secretly by the same persons. The companies were meant to act as financial and technical partners to NPDC in respect of the development of eight oil blocks sold by Shell Petroleum to indigenous companies.

In the end, Mr. Sanusi said the bank found out the companies did not provide any funding beyond using their affiliation to the oil titles to obtain loans from Nigerian banks. But when it came to oil proceeds, they were entitled to all of the earnings, based on a fraudulent agreement the companies signed with the NPDC, with the approval of the NNPC.

Mr. Sanusi said details of the entire transaction has remained secretive, and no one exactly knows how much the companies make. But earnings that go the private companies should ordinarily belong to the government.

In the voluminous submissions, Mr. Sanusi said he believed his effort was already yielding results as the NNPC, which has denied for years withholding government funds, had admitted this time to the tune of $10.8 billion.

“Before I wrote my letter to the president in September, 2013, there had been several allegations against NNPC for non-remittance of funds to the federation account,” he said. “NEITI had raised the issue in its various reports. The KPMG audit ordered by Minister Aganga when he was in the finance ministry had raised the same issues.”

“The Nuhu Ribadu committee set up by Petroleum Minister Allison-Madueke also made the same claims. It is also a regular subject of dispute between NNPC and FAAC.

“NNPC dismisses all such allegations as false and spurious, and claims in fact that the federation owes it money. In a sense, we have made progress since NNPC has now for the first time acknowledged that it did not remit to the federation a sum of $10.8 billion and has gone public with an attempt to render account.”

Spread the love  “Life’s most persistent and urgent question is, END_OF_DOCUMENT_TOKEN_TO_BE_REPLACED