Sarakis battle for the soul of Kwara as Gbemisola, APC, CPC leaders decamp to PDP 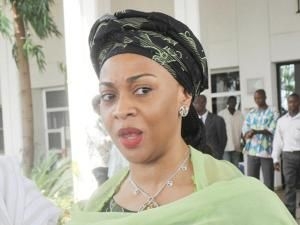 Ms. Saraki, a former senator, announced her decision when she addressed her supporters in Ilorin, Kwara State, on Saturday.

Ms. Saraki was elected senator on the PDP platform in 2007 but left the party in 2011 to challenge for the governorship seat of the state. She lost to the PDP candidate and incumbent governor, Abdulfatah Ahmed. Mr. Ahmed was heavily backed by her brother and then outgoing two-term PDP governor, Bukola Saraki.

Addressing supporters in Ilorin, Ms. Saraki urged them to join hands with the PDP “to rescue the state from the shackle of oppression.’’

The former senator, who said she was worried about the plight of youth in the state, added that majority of them were jobless.

“The situation is so bad that many people have abandoned the trades they spent several years to learn,” she said.

She, however, expressed optimism that if voted into power, PDP would return Kwara to the path of excellence in the management of human and natural resources.

She urged the people of Kwara to support President Goodluck Jonathan, saying she was happy that majority of the people remained in PDP.

Those who joined Ms. Saraki to decamp to the PDP include Lola Ashiru, an APC leader in Offa; Sunday Fagbemi, also of APC, and several other APC members.

The governorship candidate of the defunct Congress for Progressive Change, CPC, in 2011, Abdulrahman Abdulrazaq, also defected to the PDP.

Spread the love  “Life’s most persistent and urgent question is, END_OF_DOCUMENT_TOKEN_TO_BE_REPLACED