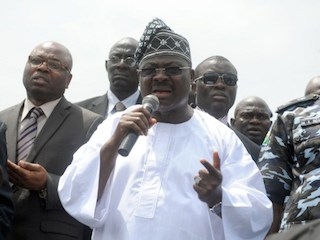 Scores of rioters went on the rampage on Monday outside an abandoned building in Nigeria dubbed the “House of Horror” after decomposing human remains and skeletons were found there.

At least 20 people were injured and 12 vehicles damaged when about 50 people brandishing sticks and machetes were prevented from accessing the property in the southwestern city of Ibadan, an AFP correspondent said.

The run-down, one-storey house, surrounded by undergrowth and strewn with the rusted hulks of at least five tractors and a dozen other vehicles, has been cordoned off since the grim discovery Saturday.

Police have so far not divulged any theory on how or why scores of skeletons and rotting corpses came to be found there, but black magic rituals are suspected among locals.

Human skulls found in the vicinity of House of Horror

Several severely malnourished people were also found wandering in the bush near the building, which is in the Soka area of the city. Reports said at least 15 others were found shackled inside.

“We want to rescue our people who are still underground and crying for help. But the police are saying no and we are angry,” one rioter told AFP.

One man was said by eye-witnesses to have been shot in the stomach by a local gang member in the rioting, one woman added. His condition was not immediately known.

The grisly find came after a group of motorcycle taxi riders reported that some of their members had gone missing and were believed to have been abducted.

Governor Ajimobi: vows sanctions against the men of evil

Kidnapping victims in Nigeria are sometimes tortured or sacrificed in black magic rituals, and local media have reported the sale of human body parts across the country.

Inside the building, there was an overpowering stench of death and swarms of flies, forcing onlookers to cover their noses and mouths with facemasks, an AFP reporter said.

Personal belongings such as clothes, shoes, sandals, bags, bank cards and cooking utensils could be seen littered on the floor of its eight rooms, he added.

Locals said they believed the building, located about one kilometre (less than a mile) from the main Lagos-Ibadan highway, was being used as the offices of a construction firm.

About 50 bags of solidified cement were visible in the building.

“For a long time, we have been noticing some movements in this area and we alerted some security people. But they did not react,” said local community leader Isiaka Bello.

– Perpetrators ‘will be punished’ –

Oyo state governor Abiola Ajumobi visited the scene on Monday and assured residents that those responsible would be brought to book — and called for locals to report any suspicious activities.

“Those behind this dastardly act will be punished by God. We too will punish them when we get them. May we not have a repeat of what has happened,” he said.

People pray for the dead at the grisly scene

“Some suspects have been arrested while some are on the run. But we are on their trail,” he said, adding that the government would seize the land and property.

Police said on Sunday that six people, including five security guards allegedly armed with guns, bows and arrows, were arrested at the scene.

“Anybody who is found wanting or connected with this heinous crime will be prosecuted. We are investigating and six suspects are in our custody,” said state police commissioner Mohammed Indabawa.

Previous Post Flight 370 passenger’s relative: ‘All lives are lost’-CNN
Next Post Gboyega Nasir ISIAKA : PROFILE OF A LIFE OF PURPOSE AND VALUE.