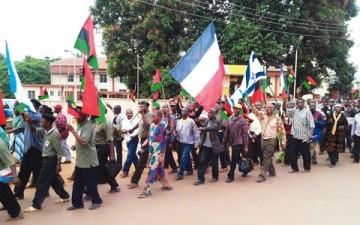 The Biafra Zionist Movement, BZM, says it was behind the attack launched at the Enugu Government House last Saturday.

BZM President, Mr. Benjamin Onwuka, who addressed a press briefing on Wednesday boasted that the group would return to the Government House on March 31.

The group warned Nigerians to expect bloody attacks if the Federal Government failed to free the Republic of Biafra from its territories by March 31, 2014.

The BZM, a secessionist group, said it captured the Government House for four hours – between 3am and 7am – without carrying arms.

This is contrary to claims by the police that the invaders of the Government House came with machetes and cutlasses.

Members of the group comprise of lawyers, medical doctors, engineers, chartered accountants and other thoroughbred professionals.

They said they held sway at the Enugu Government House for four hours, chased men of the police and State Security Service into hiding and only retreated when the soldiers came in.

His statement read, “I want to let you know what happened on March 8 at the Government House Enugu. This is to confirm the true report about what happened. You know very well that since January 12, 1970 the flag of Biafra has never rested on the Government House in Enugu which is the centre power of the Biafra people. What we did on the 8th is to reconfirm the independence of the Republic of Biafra which we successfully did.

“We didn’t attack the Government House but we captured it back for the Biafra people. We captured it for four hours and there was a battle between the Biafrans and the Nigerians and by 7 am we retreated because we didn’t have any weapons in our hand, to avoid any loss of life.

“The reason why we did it was to show the Biafra people that the hope for Biafra is still alive and that nothing shall quench the aspiration of the Biafra people to be independent. That independence has been resurrected. So the Biafran flag was raised at the Government House on the 8th of March 2014 and I Benjamin Igwe Onwuka led the operation.

“It wasn’t an armed attack on the Government House, it wasn’t kidnappers as the police have said. It was Biafran people and the Biafra Zionist Federation led it and I Benjamin Onwuka was the man that pioneered it. It wasn’t an attack on any one but for the restoration of the independence of the Republic of Biafra. As I said, the raising of the flag at the Government House is a symbol of the resurrection of the Republic of Biafra which we did on the 8th of March 2014″.

Continuing, Onwuka said, “I want the Biafra people to know and the entire world that the Biafra has been resurrected and no force of arm could hinder this aspiration for Biafran independence.

“I thank God for this press conference to set the record straight that the Biafra is independent now because that flag that has been raised at the Government House as I said has never happened since January12, 1970 and we succeeded in doing that.

“The only reason why we retreated is because we had no weapon but our boys battled for four good hours, from 3am to 7 am we held Nigeria to captive.

“And these are the conditions they must meet. Our ultimatum number one: Nigeria must vacate Biafra by March 31, 2014, failure to do so; it is going to be a bloodbath. But this time around we are going to be fully armed and prepare for it. What is happening in Ukraine and Syria is going to be a child’s play if they fail to leave Biafra by 31st of March 2014.

“The Biafra people have had enough, the killings of our people on a daily basis both in the North and here in Biafra is no longer acceptable to us. There is no country in the world that the security of the citizens is not guaranteed. Ours must be guaranteed. This is the promise to the Biafra people that the killings must stop and it will stop because Biafra has risen.

“With what we have achieved now, I am calling on the Biafrans around the world to support our quest for Biafra Independence. It will be done. This attempt to reclaim Biafra Independence we shall revisit it again very soon but this is a golden opportunity for all Biafrans to come together as one regardless of your state because the boundary for Biafra now is from River Benue to Ore.

“What happened on the 8th March is victory for the Biafra people and I am assuring them that this time around the world powers that we have been dealing with are coming to our rescue now. This will never be like 1967. We are going to fight it both on military and diplomatic angle. But I am assuring you that Biafra is going to win it hands down.

“I want to assure Biafrans that the Zionist carried out the operation at the Government House Enugu on March 8 and you can see our symbol (Displaying the picture of the Zionist flag) and this is to tell the world that the amalgamation of Nigeria has been destroyed from the 8th of March 2014.

“Biafra people are proud to declare that we are friend and supporters of the Israelis and Israel shall be our number one ally in the world and we are proud of it. We also displayed Biblically that a chunk of the Biafra people (the Igbos) are from the Tribe of GAD Genesis Chapter 46 verse 16 it listed the sons of GAD and also in Chapter 30 verses 9 to 14 when Zilpa conceived GAD the Mother of the Biafra people”.

Saying that he was not afraid of any arrest, Onwuka who was detained along with over 400 members of his group shortly after re-declaring the republic of Biafra in Enugu on November 6, 2012 and were later granted bail on December 11 same year, demanded the immediate release of four persons arrested by the police during last Saturday’s invasion of the Government House.

“Our next demand from the Enugu State Commissioner of Police is that our four boys that are being held must be released unconditionally. Those boys must be set free unconditionally because what Nigeria is going to face very soon they will never forget it. This is not 1967 to 1970, this is 2014 and the Biafran people are ready for it”, he said.

Onwuka called for unity among all the pro-Biafra groups and militant groups in the East including MASSOB, MEND and Bakkasi boys to realize the Biafra independence saying there was no difference between them.

On the proposed National Conference, Onwuka said that it was unacceptable to the Biafra people saying “we must go back to history of January 1967 when Aburi Convention was organized by everyone and getting to Aburi we signed everything and agreed but getting to Lagos they reneged on the agreement and that caused the civil war. History must be the greatest teacher of all.

He said, “All those from the states of the new Biafra I have mentioned should not go for that conference, if you do you are doing a disservice to the Biafran people. We have suffered enough, and enough is enough”.