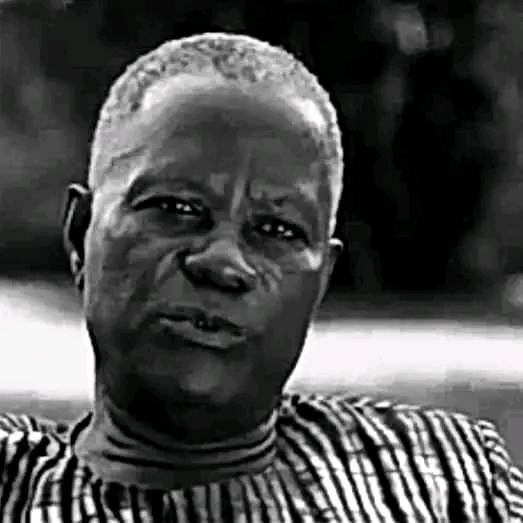 This is a story of a true Patriot, Professor, Historian, Brother, Friend and a Culture Icon, Dr. Joseph Saye Guannu, I knew.

My tribute: “A Big Cotton Tree Uprooted” is written on behalf of Liberian Students in the United States and Canada in the 1970s and 1980s.

At that time he was affectionately referred to as Brother Saye. He was friendly with everybody who came in contact with him. He was the true definition a GOOD PERSON: kind, helpful, trustworthy, considerate and ‘down to earth’ as we say in Liberian parlance.

This giant of a man was born on Tuesday, September 17, 1940 in Sanniquellie, Nimba County, Liberia; he died on Monday, August 29, 2022 at about 8:43 p.m. in the city of Ganta, Nimba County – after a protracted period of illness; just few weeks shy of his 82nd birthday.

Due to the manner the elites and Liberian leaders were mistreating the poor and the Liberian people at home; we borrowed from the U. S. Civil Rights movement, the Black Power and Black Consciousness Movement in South Africa as our point of reference. Their activities influenced us in the Diaspora to respond to the urgent needs of our people at home. This clarion call strengthen our resolve, brought us together to find some solutions to the plight of our suffering masses in Liberia. Because of the changes around the world – at the time, we felt it necessary to challenge the authorities in Liberia so as to promote freedom of speech, civil and human rights for every Liberian, regardless of their gender, ethnicity, religious beliefs, political orientation and their station in life.

Prior to the presentation of the Task Force’s final report, there was a disagreement between Chairman Matthews and me (Siahyonkron Nyanseor) then known as Sam Anthony Roberts, III, which Ambassador Guannu mentioned in a letter dated April 12, 1983 to me! It is attached for the purpose of history, and the major role Dr. Guannu played in the Diaspora.

In 1972, G. Baccus Matthews and I served on the Task Force of which he was the Chairman. At the final meeting which was held in 1973 at Drexel University, Philadelphia, PA; the Committee was assigned the task of coordinating and compiling the final report, which was to be submitted to the Conference. To my surprise, I was left out of this process. The excuse was, I could not be found, yet, the final report had my name as a member; so I protested that if my name had to be included, the Committee had to reconvene in order for me to make my input. My protest was accepted by the Conference after 35 to 45 minutes’ debate. A consensus was reached for the committee to reconvene. We met and put the finishing touches to the report.

From the inception of the Republic of Liberia, 152 years (1822 – 1974) of its existence, political, social and economic powers were held by a few who believed in the politics and philosophy of: “So Say One, So Say All”. This approach and system of government, limited the participation of the majority of the Liberian people in the affairs of their government. As a result, the country failed miserably in making any significant progress and development.

In the organizing document, the Annual General Conference was made the Supreme Authority because ULAA as a “Representative Democratic Organization” had to assure the full participation of the membership in the “general affairs” of the organization. Secondly, it was set-up in this way to discourage the abuse of power and authority by a select few, which is a hallmark of past Liberian government officials and families.

Find below excerpts of April 21, 1974 Declaration, which includes the Vision, Principle and objectives. It reads:

“To create a framework for the intelligent examination and discussion of issues relating to the welfare of our people as well as the presentation of responsible collective views and opinions”, which includes the Motto: Together, We Struggle For A Better Liberia.

a) To establish a system of meaningful communication among all Liberians;

b) To stimulate and encourage exemplary scholarship among Liberians at home and abroad;

c) To create a framework for the consideration of problems related to the welfare of Liberian people at home and the articulation of responsible collective viewpoints among Liberians abroad, and

d) To Provide and/or coordinate various services to Liberians and their local organizations abroad.

Find below copy of the letter to me from Ambassador Joseph S Guannu: 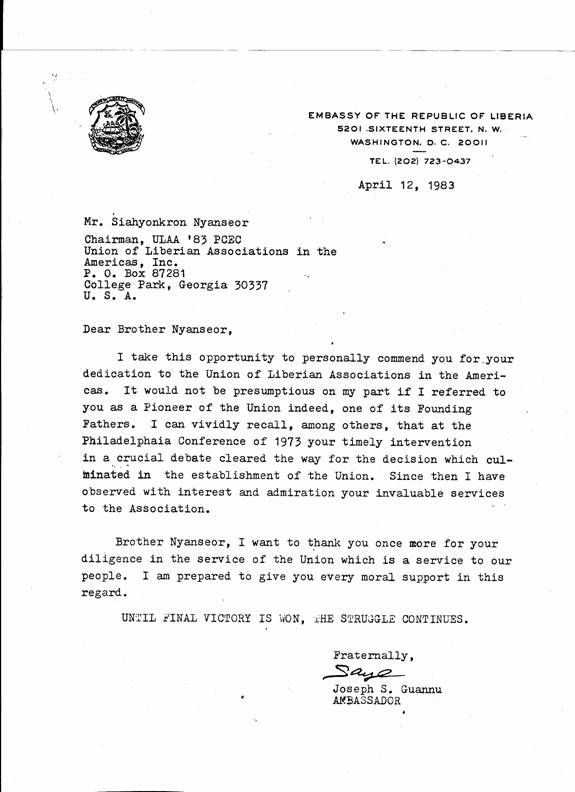 The purpose for which my tribute to Dr. Joseph Saye Guannu is titled: “A Big ‘Helleva’ Cotton Tree Uprooted” – has to do with the significance of a Big Cotton Tree in Africa. In Africa, a Big Cotton Tree is used to provide directions. Most African towns and villages are built in the location of a giant Cotton Tree. The tree serves as a navigational guide to go from one village to the other. More importantly, Cotton plays a vital role in the African economy, particularly in the sub-Saharan region. It is both a significant export crop as well as a fiber extensively used in the domestic textile industry and is a key to farmers’ livelihoods and state revenue.

I use ‘The Big Cotton Tree Metaphor’ to describe Brother Guannu because he was not only a man with many titles, but he was a role model in our lives in the Diaspora for all Liberian Students in the 70s and 80s. As our mentor, Dr. Guannu pointed us in the right directions to gain knowledge so that we will be useful not only to our parents but to our beloved country, Liberia.

I remember Dr. Guannu telling me to “Go to school to learn ‘proper book’ so that Liberian History will be rewritten to include the ‘natives’– this way, Liberia will truly be united as “One Nation, Under God”.

I believe it was due to his love for Liberia he became involved in organizing the Liberian Students Association (LSA) in the Americas and Canada. In addition, he became a principle advisor to Jangaba Johnson (Tambakai A. Jangaba), Chair of the Task Force.

I have personal and profound memories of Brother Joseph Saye Guannu. I remember as if it was yesterday when he us this story in 1833 “S” Street NW, Apt. 42, Washington DC of Blamo and Naomi Seekie.

According to the story, when he completed his studies abroad, he returned to Liberia and visited his parents’ village in Sanniquellie, Nimba County to reunite with relatives and friends. One morning when he woke up, his parents’ compound was occupied with ‘plenty’ sick people that had assembled for treatment from their son who had become a doctor. To them, every doctor is a medical doctor. But when he explained to them that he was not a medical doctor, but a ‘book doctor’; they were unhappy! There general response was he is a “Play, Play Doctor”. They felt hurt for their son to have spent all those years abroad for nothing.

A True Culture and Literary Icon

Saye was a true patriot who worked tirelessly for Liberia, and the Liberian people everywhere – be in the Diaspora and at home. As a scholar, he was committed to truth-telling and represented the true meaning of the word – Statesman.

Dr. Joseph Saye Guannu has gone to join Liberian’s Literary Icons like, Liberia’s Poet Laureate, Roland Tombekai Dempster, Bai Temia Moore, H. Carey Thomas Albert Porte and others who are no longer with us; yet, their contributions have left lasting impact on many of us, including this writer.

As a youth, I grew up reading both Prof. Dempster and Bai Temia Moore’s writings about Liberia’s rich culture and its people that the elites and the leadership of our country were too ashamed to celebrate. One of Prof. Dempster’s quotes I am fond of is: “Let the press be free; the truth, however crushed to Earth, shall rise again. For us, we shall speak the truth, if bullets to our breasts!”

Prof. Dr. Guannu wrote several books, most notable of which are ‘Liberia History before 1857; Liberian History up to 1847; The Inaugural Addresses of the Presidents of Liberia from Joseph Jenkins Roberts to William Richard Tolbert Jr. (1848 -1976). Others are An Introduction to Liberian Government: The first Republic and the People’s Redemption Council from 1983-1985 and Liberian Civics 2004-2010.

Dr. Guannu was a true patriot and Pan-Africanist. He understood the struggles and appreciated Africa’s Greatness! Unlike the cultural and historical icons, I mentioned earlier; today, Liberia consists of individuals whose sole purpose is to get government jobs to advance their own political agenda, which includes their class and tribal interest – a repeat of the same problems that led to the April 12, 1980 coup.

According to his friend and comrade Dr. Togba Nah Tipoteh: “Some persons see the passing away of Prof. Dr. Guannu as a LOSS but it is a GAIN because of the considerable knowledge about Liberia and Liberians that we have from him”.

The culture these Liberian literary and cultural heritage icons worked tirelessly to promote is worth preserving; to which Mr. Rudolf Janke says, “Preserving the country’s heritage means to save the story from being lost”.

I bade you farewell Saye; our Ancestors are gladly waiting to welcome you with a special made Country Cloth Gown, a cow tail and women lappas spread for you to walk on to greet you in all of our native languages.

Therefore, we are not sad because you left many of us behind to continue until the final victory is won – (the struggle for “Rice and Rights”). The Struggle continues!

PEACE, until we meet again!

About The Author: Elder Siahyonkron J. K. Nyanseor, Sr. is a life-long activist (*troublemaker) in researching the true history of Africa, the people of African origin in the Diaspora. He had dedicated his teaching of African culture; spent over 48 years advocating for human, civil and constitutional rights of all people, especially, the Liberian masses. He is a Griot, poet, journalist and an ordained Minister of the Gospel. He can be contacted at: [email protected].

Spread the love  “Life’s most persistent and urgent question is, END_OF_DOCUMENT_TOKEN_TO_BE_REPLACED