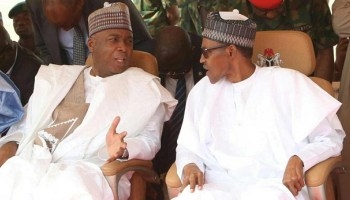 During his throughly uninspiring six minute broadcast this morning instead of appealing to Nigerians for patience and understanding and instead of apologising to them for the ineptitude and sheer incompetence that his government has displayed over the last 2 years, President Muhammadu Buhari has returned home after 105 days on his sick bed in the United Kingdom and not only insulted Nigerians but also threatened them.

He made no attempt to reach out to the people, to build bridges and to calm the troubled waters in what is clearly a traumatised and divided nation and instead he sought to intimidate and talk down on our people and his perceived enemies.

The President appears to have failed to appreciate the fact that times have changed and that he cannot impose his will on others.

He claims that his views represents the thinking of the majority of Nigerians yet he refuses to accept the idea or acknowledge the legitimacy of a national referendum.

He is meant to be a servant leader and a democratically-elected President and not a military dictator, a Caliph or a King.

If he wants to enhance national unity, which is of course a noble and righteous venture, and if he really wants Nigeria to remain one then he must desist from his dangerous and provocative rhetoric, he must treat all Nigerians like human beings and as equals, he must exhibit a much higher degree of sobriety and accomodation of contrary and dissenting views and he must display far more sensitivity, understanding and restraint in his interactions and discourse with the opposition and those that do not agree with him.

Failing that and without a quick recourse to the devolution of power from the centre and the neat and timely restructuring of what is essentially a fake pseudo-federation and a functional unitary state, the agitation for emancipation will become more pronounced, the various ethnic nationalities in this country will eventually exercise their right of self-determination and our nation will eventually break.

The fault lines are there and they are visible for all to see. We must recognise our differences, acknowledge our fears, concerns and anxieties, sooth frayed nerves, bridge the gap, make the necessary concessions and heal the wounds or we must prepare for the very worse in the not too distant future. That is the way forward and that is the only way to ensure and guarantee lasting peace and unity.

Since the President mentioned the late and reverred Chief Emeka Odumegwu-Ojukwu, the Ikemba Nnewi, the former Head of State of the old Biafra and the Eze Gburugburu of the Igbo, in his morning address let me add the following.

If this great man were still alive today to witness what his Igbo people have been subjected to over the last two years under the Buhari administration he would have been the first to insist on Biafra all over again.

And the truth is that Ojukwu, Major Chukwuemeka Kaduna Nzeogwu and the great Zik of Africa, the Owelle of Onitsha, Chief Nnamdi Azikiwe have collectively resurrected in a young lion from the east called Nnamdi Kanu who he must handle with the utmost care.

What the President is unable to grasp and fails to comprehend is this: we are not children, we are not animals and we refuse to be second class citizens.

Simply put we would rather die as free men, standing on our feet and resisting evil, tyranny and subjugation than live as servile slaves and pliant bonded servants with bowed heads and on bended knee.

All Mr. President’s sinister and inappropiate talk about “red lines” and his insidious threats of bloodshed and bloodflow cannot change that and neither is anyone intimidated. Such talk is reckless, dangerous, irresponsible and inappropiate.

Worse of all other than saying that every Nigerian has the right to live in any part of the country, which in itself is undoubtedly a welcome and gratifying assertion, he refused to order the arrest or threaten to cage and bring to justice those that gave the Igbo people a chilling quit notice and that have promised to unleash genocide, ethnic cleansing and mass murder on them if they refused to abide by it and leave the north by October 1st..

This strange omission and instructive refusal by Mr. President is unacceptable and it feeds into the narrative that there may well be some kind of frightful hidden agenda unfolding.

It was also a missed opportunity to allay the legitimate fears and genuine concerns of many Igbos and southerners that live in the north.

I sincerely hope that history does not repeat itself in this regard.

Finally the President expressed his concerns about the social media.

The truth is that the internet has always been the nightmare of tyrants and dictators all over the world ever since it came into existence.

This is because it is designed to ensure the free flow of information and to expose their excesses and atrocities.

Now that our President has acknowledged his disdain and hate for this medium we will increase our efforts to make life more difficult for his government through it.

We will keep them on their toes and hold them to account by utilising the social and traditional media all the more. What he wishes to hide shall be made manifest and known to all.

His morning address was shallow, insensitive, uninspiring and divisive and, judging from what I saw, I believe that he should resign, go home and take care of his health.

Spread the love  “Life’s most persistent and urgent question is, END_OF_DOCUMENT_TOKEN_TO_BE_REPLACED