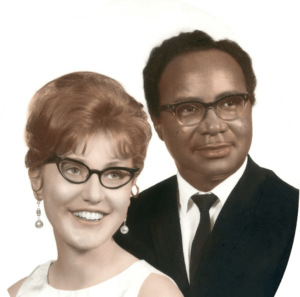 anthropology professor who was a hereditary Mende chief from a small remote village in northwestern Liberia.  Below is an excerpt from our love story, Beyond Myself: The Farm Girl and the African Chief, which I wrote after he died.

Completed in the 1960s, the eight-story Executive Mansion in the capital, Monrovia, represented the pinnacle of Liberia’s empty grandeur – in stark contrast to the poverty of the country where the vast majority lived in mud block huts. Facing the Atlantic

Ocean, the mansion housed government offices with the seventh floor reserved as the president’s residence.

The mansion was every Liberian’s dream of opulence and ownership. Instead of roads into the interior, health care, and education, Tubman used state coffers sparing nothing in the building’s construction and appointments. As the prototype of Americo-Liberian aspirations, it stood as the epitome of the desired image abroad.
In 1972, my husband took me to visit his people after being away for twenty-two years. When we returned to Monrovia, he pleaded with the

new president, William R. Tolbert, Jr., in the Executive Mansion to have a road built to Vahun, which was cut off from the rest of Liberia by the Kamboi mountain range.

The following summer when we took nine Summer Study Abroad students to Liberia, we were all invited to the mansion to meet with the president.  As we sat in the presidential waiting room, I asked our guide about the row of presidential oil portraits on the mahogany walls.

He said, “This is Joseph Jenkins Roberts, the first president of Liberia.”

I blurted out, “Why he looks like a white man.”

He said, “We say he was light, bright, and damn near white.”

Tour of the Executive Mansion

As I shook Tolbert’s hand, I realized he was the only head of state I ever met. We were given a royal tour of the mansion after our reception and photo taken with

the president. The guide explained the seal of Liberia, “The love of liberty brought us here,” showing us the ship that carried the Free Negroes and freed slaves when they came to Africa’s shores before the Civil War.

He led us into the formal dining room and my jaw dropped. The wall facing the Atlantic Ocean was glass – the ceiling mirrored. Long tables filled the room lined with satin covered chairs. The guide explained,
“Imagine you are attending a state dinner. Men are dressed in top hat and tails and women in gorgeous African gowns. Trays of shrimp and Jellof rice are brought in by waiters in tuxedos.”

Americo-
Liberian and tribal history. We were taken to the president’s chapel and trophy room where exquisite gifts from all over the world were displayed.

As a special treat, the guide took us to the seventh floor – Tolbert’s living quarters. We briefly passed through his bedroom where his bed faced the Atlantic, covered by a Southern quilt.

The Americo-Liberians, who comprised 5% of the population, owned 95% of Liberia’s wealth. The descendants of oppressed Free Negroes and freed slaves used their lavish lifestyle to separate themselves from tribal Liberians. The Americo-Liberians flaunted their wealth hoping to prove their superiority.

When Tolbert was assassinated by a Krahn security guard in 1980, I imagined him in his bedroom begging for his life – the Southern quilt crumbled on his bed.

When we returned to Liberia three years after the Coup of 1980, the mansion’s gilded image was severely tarnished. Ragged grass covered the front yard. The lavish European furnishings had disappeared. Brocade

drapes flapped out of open windows. Instead of the presidential portraits, the mahogany walls in the presidential waiting room displayed a spray of bullet holes, as well as the door to the presidential office. One could only imagine what happened there. That time we were about to meet the Krahn sergeant who had taken over.

The Executive Mansion no longer represents Americo-Liberian wealth in a country ravaged by two civil wars covering fourteen years – the horrific cost of inequity. My husband and I wrote a book explaining why this happened, Slaves to Racism: An Unbroken Chain from America to Liberia.

Previous Post THE PRESIDENT’S MORNING BROADCAST
Next Post Liberia’s Congor and Country Divide Is What Racism is to America! By Siahyonkron Nyanseor