The Pathetic Story Of A Nigerian Ex-Bank Manager Whose Dream Was Shattered In The US. All of us must rise to help. 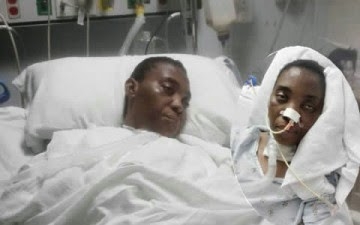 
Inside the intensive Care Unit of Wake Medical Center in Raleigh, North Carolina, seven thousand miles from her country home, Ebere Ukwu sleeps, eyes open; kept alive by the hospital’s life support machine. Her fate is hanging between faith and modern medicine. Her life didn’t have to come to this painful circle. She was an ambitious dreamer that wanted to explore her young world and excel. The ICU room wasn’t supposed to be her final destination. But early spring of 2013, her exciting life of adventure suddenly collapsed during a visit to the Emergency Room for minor aches, pain and high body temperature. Continue after the cut.

Her charming life began at the completion of university education in 1991. After her Youth Service, Ebere got hired as a staff of the United Bank for Africa. Few years later, she shifted her loyalty from UBA to other banks, finally settled at Unity Bank where she rose to become the branch manager of the Tin Can Island/Apapa branch.

Mr. Ezuma Ukwu, Ebere’s elder brother described her as a charming enthusiastic sister. “She was a giver of everything to make life easy for her friends and family. Ebere’s soul was a pot of gold: she dipped into it and touched so many lives with her candour and kindness: a character embedded in her religion.”

Ms. Ebere’s admiration for all things American pop culture was manifested in her young lifestyle and swagger. Her desire and love of Yankee life moved her to apply for a visa to the United States. She was granted a two-year visa. She waited for the right time to make that visit. It came during the financial institutions’ meltdown in Nigeria. She resigned her position at the bank and relocated to the United States.

Ebere arrived USA during the cold winter month of January 2013 in pursuit of life, liberty, happiness and opportunities. She anchored her new residence at her sister in-law’s place in Atlanta, Georgia. Atlanta was not friendly to her dreams of relocation and quick employment privileges. Ebere soon left Atlanta for Maryland, at the invitation of an extended family friend, to try few available menial jobs targeted towards new immigrants wishing to settle into a different social structure and culture. Ebere accepted an offer as a part time nanny. She was frustrated by the lack of appeal and job satisfaction. This wasn’t the job she expected from the land of dreams. Two weeks after her first job, she quit. Ebere is diabetic. During one of her daily chores as a nanny, she split her big right toe. The small gash was infected, thus, it resisted casual self medication. But Ebere kept nursing the minor wound.

Ebere reconnected with Tunde, her sister’s ex boyfriend who lives in Raleigh, North Carolina. She pleaded for Tunde’s assistance with employment and a new life direction. Tunde invited her to visit Raleigh and search for better employment opportunities she desired.

Ebere arrived Raleigh with severe temperature and fever. Two days after her arrival and still running high temperature, her host encouraged her to get immediate medical treatment at the ER of Wake Medical Center. She went to the hospital and was urgently admitted.

Doctors initially suspected she had been infected with Poliomyelitis but X-ray revealed otherwise.

Ebere’s sad condition has energised some Nigerians in Raleigh, they have adopted her. These families and friends allege she was conscious and interactive when she was admitted to the hospital and before treatments were administered to her. The X-ray from the hospital indicated that poliomyelitis was negative. However, the hospital allegedly began series of antibiotics treatment when she was admitted. She was relieved until a new medication was added. The new medication caused her severe reaction: affected her breathing pattern. She was scared of telling the hospital that the new medication was affecting her breathing: so she confided in Tunde. Tunde encouraged her to tell her care givers and request a change in medication. She courageously complained and her medication was changed.

Her unhealed right toe injury became a concern for doctors treating her. The doctors decided that the best treatment for the toe was amputation. The nurses informed Ebere that her toe would be amputated to prevent further infection. Ebere struggled with the decision to allow amputation; culture shock , as modern medicine was about to alter her body. She reluctantly agreed and surgery was performed.

Few days after the surgery, Ebere was blasted by massive cardiac arrest. Nurses found her on the floor of her room, unresponsive and in comatose. They attempted to resuscitate her, but she slipped deeper into coma. The hospital called her immediate “family” and friends, told them that she would never come out from comatose. She is brain dead. Doctors advised the family to consider turning off the life support machine. Her new family continue to hope for a medical miracle. Cost of keeping Ebere alive the past year has risen past $1m. Ebere lives through ventilation. She’s been vegetative since March 2013.

She survived various bouts of infections, developed a deep sacral ulcer, has a wound vac that runs on her twenty four hours, Foley catheter and colostomy insertions. She also had abdominal surgery procedures to correct anatomy of her intestine with a G tube insertion to assist her digestive system.

Her condition continues to get worse as she sleeps. Her skin is peeling off her body and she has developed bed sores. The hospital stopped treating any new health problems. It concluded her case is hopeless. It has requested the family to remove Ebere from its facility and return her to Nigeria. Ebere would not survive an intense 12 hour flight to Nigeria. Nigeria may not have a 24hr life support health care system that could keep her alive until miracle happens or family decides to let her go. None of her immediate family lives in the United States. Her family in Nigeria is not able to afford a plane ticket to the United States to decide her continued dependence on life support. Ebere’s voice and caretaker in this unfortunate circumstance is Dr. Ify Violet Hill, a Nigerian resident in Raleigh: “I don’t know her. But I have adopted her as my sister. I am here for her. Me, my husband and the Nigerian community. Her story is pathetic. She came here to chase a best dream, now she lies in the hospital brain dead. We don’t know what happened to Ebere.”

Dr. Hill has launched a fund drive to raise travel money and other expenses for Ebere’s family in Nigeria to visit their sister.

“She needs her immediate family here. They should come and see her in these final moments. She needs to hear their voices encouraging her to fight on, telling her they love her or wishing her eternal peace as she makes final exit. We need financial support to help this family see their dying loved one. Please help us with donations to fly few family members to visit her at the hospital. Ebere deserves to feel her family in her hospital room, even for the last time. Her brother was here last year but because of finance, he is not able to return.”

The Nigerian community have become her only family, offering hopes, prayers, vigils and at times engage the hospital in negotiations for Ebere’s care: a care for a fellow stranger who came to the city in search of a great life only to collapse and become brain dead at the hallways of the hospital.

Spread the love
Oye Gureje: A Scholar As A Rhotacist, By Remi OyeyemiSpread END_OF_DOCUMENT_TOKEN_TO_BE_REPLACED
Previous Post Pakistani newlyweds decapitated by bride’s family in honor killing
Next Post EKITI: SOME HARD LESSONS FOR THE APC- by Femi Fani-Kayode