EKITI: SOME HARD LESSONS FOR THE APC- by Femi Fani-Kayode 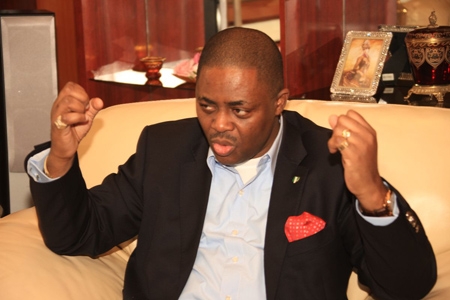 There  are three things that Ayo Fayose told me during a lively and prolonged discussion in my hotel suite at the Ideal Nest Hotel in Osogbo, Osun state a few months ago.  The first was that I would eventually leave the APC and that the reason that I hadn't left at that time was because I didn’t know them yet.

In order to prove his point he told me about what they had put him through when he left the PDP and joined their ranks a few years back (they were known as the ACN at the time) and how after a series of betrayals, misunderstandings and insults he had no choice but to go back to the PDP where at least ''freedom of expression and differing opinions were welcome'' as he so aptly put it. He said that he gave me just a few more months  and that after that I would ‘’come back home’’ to the PDP just as he had done before.

The second thing that he told me was that he would become the flagbearer of the PDP and that he would defeat my brother Governor Kayode Fayemi in the upcoming governorship election in Ekiti state. He concluded by saying that this would mark the beginning of the end of the APC in the south-west and indeed in the whole of Nigeria.

I did not accept any of his projections and predictions but it is self-evident that he has been proved right in all three. Not only did I discover, albeit the hard way, what the APC and it’s self-proclaimed ‘’owners’’ were really like and what their real agenda was, but I also left the party and ‘’went back home’’ to PDP just a few months later.

He also made good his threat, won the PDP primaries and went on to defeat  Kayode Fayemi in the governership election of Ekiti state a few months later. He has been proved right on the third count as well because the signs of ‘’the beginning of the end’’ for the APC had already started appearing long ago.

With the way in which many notable leaders of the party have jumped ship in the last few weeks and months, including  Ibrahim Shekarau, Attahiru Bafawara, Marcus Gundiri, Dele Belgore, Buba Marwa , yours truly and a number of others and with the quiet grumblings from within by a handful of notable and more respectable figures like Tom Ikimi , Ali Modu Sheriff,  Kashim Ibrahim-Imam,  Segun Osoba, Niyi Adebayo and a number of others who have rightly expressed strong reservations about the way that they have been treated by the ‘’powers that be’’ from within, it is clear that the APC is not only finished but that after the special convention for it's Presidential primaries takes place in November it will explode in a very dramatic manner.  Fayose appears to have had the gift of foresight in all these matters.

Once again I offer  a hearty congratulations to him and to the entire leadership of the Ekiti state PDP on their historic victory in the governorship election that took place in their state on 21st June 2014. The people of Ekiti have spoken and their choice MUST be respected by all.

My heart goes out to my brother Kayode Fayemi who fought gallantly but lost the election and who remains not only a man of honour and unimpeachable integrity but also one of the finest minds in the country. He is certainly one of the most cerebal, disciplined, compassionate, accomodating and civilsed leaders that the APC has within it's ranks and one of those that gave it a semblence of integrity and credibility.

His state broadcast where he conceded defeat to Fayose proves my point and it speaks volumes. He is a first class gentleman and a good sport. Unlike most of those in his party he knows when to call it quits and he respects the choice of the people. That is worth commending and it is worthy of emulation.

By that single act alone Fayemi has guaranteed a place for himself in the future of yoruba and Nigerian politics and if he can only change parties and leave the Almajiris he will still go very far indeed. For him the future is still very bright and the sky is the limit. I salute his courage and commend his past efforts for Nigeria and for his state.

Yet the truth must be told. And that truth is that whether they want to accept it or not the people of Ekiti state sent a very strong signal to the national leadership and stakeholders of the Almajiri People's Congress during the election.

The rejection of Fayemi at the polls had as much to do with the disgust and opprobium that most people in the south west and indeed the country harbour and hold for the tiny cabal of dictators and demi-gods that constitute the APC leadership as much as it does for anything else. Their message is simple and clear and it is as follows:

1) They should stop playing religious politics, stop being petty and stop trying to implement a muslim agenda in our country.

2) They should stop behaving like a primitive cult where only the opinion of one or two leaders matter and where dissent and differing opinions have no place,

3)They should stop trying to demean others and stop treating them with contempt,

4)They should stop arrogating all knowledge and all power to just a handful of people at the top that have clearly lost touch with reality,

5)They should stop taking others for granted and stop calling our yoruba oba's ''useless''.

6)They should stop telling people the most disgusting, hateful, shameful and monuemental lies about others.

7)They should rid themselves of their slave mentality and stop playing second fiddle to those that believe that they own Nigeria.

8)They should stop trying to enslave their people by returning  the hegemonists to power through the back door in Nigeria.

The simple truth is that God has turned His back on the Almajiri's People's Congress. This is because of the atrocities that are being committed by a few of their leaders right at the top, because of their evil, covert and subterreanean agenda, because they wish to turn the yoruba, and indeed the entire southern part of the country, into perpetual slaves and because of their patently and unapologetic anti-christian agenda.

Given the history of our country and the suffering of the people of the south west over the last 53 years since we gained independence from the British, no true yoruba nationalist should have anything to do with them.

I say this because to say that you are a yoruba nationalist and at the same time you are working day and night to hand over power to a die-hard, ultra-conservative, hegemonistic, brutal dictator and despot like Mohammadu Buhari, who believes that Nigeria was bequethed to him and to his people by God and his forefathers, is a contradiction in terms.

Anything and anyone is better than that and no self-respecting yoruba man, southerner or indeed middle-belter would ever do such a thing. Let those that have slavish souls continue to attempt to turn us all into the slaves of our collective oppressors and throw us into perpetual bondage: the rest of us will stand against them, expose them, resist them, defeat them and flush them down the toilet where they belong.

God has rejected the Almajiri People's Congress and the sooner they accept that hard fact and bitter truth the better it will be for them and for Nigeria . Yesterday it was Ekiti. Tomorrow it will be Osun.

We will not rest until every inch of yorubaland and, indeed Nigeria, is freed from the grip of the Almajiri People's Congress and their insidious and desperate Haramite allies from the north. The days of fooling the people and winning elections by propaganda, intimidation, lies, threats and coercion are long over.

The people of Ekiti have spoken and soon the rest of Nigeria shall speak as well. For the Almajiri People's Congress and their Haramite allies, it is all over.

A new era for Ekiti begins today whilst another one ends. Yet everyone appears to be smiling and that is precisely how it ought to be.  There also appears to be a distinct atmosphere of hope in the air and a new-found, refreshing and distinct sense of unity of purpose coupled with a firm resolve to allow peace to reign and to let bygones be bygones.

This is a classic example of what the late Waziri Ibrahim of the defunct GNPP labelled as ‘’politics without bitterness’’ and it is very refreshing.

I was particularly touched by Ayo Fayose’s declaration that there was ‘’no victor and no vanquished’’ after the election and by his promise to work with Kayode Fayemi and the Labour Party gubernatorial candidate Opeyemi Bamidele to ‘’move the state forward’’.  I salute his magnaminity in victory.

I also salute the sheer courage  of Fayemi and Bamidele to accept defeat in good faith and I commend them both for stretching out their hand of friendship to the winner of the election.

All three of these gentlemen are well known to me and they are my friends and brothers. They are also proud sons of the Yoruba who have proved to the world that politics in the south-west  can be played without any violence, rancor and bitterness.  I wish them all the very best in their future endeavours.

Previous Post The Pathetic Story Of A Nigerian Ex-Bank Manager Whose Dream Was Shattered In The US. All of us must rise to help.
Next Post The People Voted Their Stomach -Blues For An Arrested Renaissance By Niyi Osundare