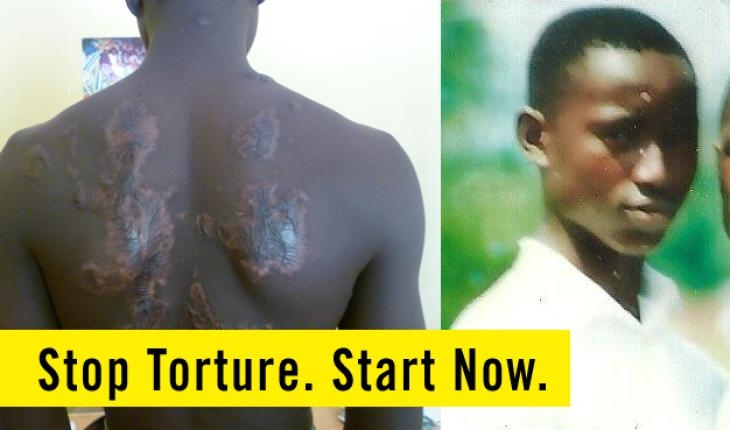 On 27 November 2005, 16-year-old Moses Akatugba was awaiting the results of his secondary school exams when his life changed forever. He was arrested by the Nigerian army and, he says, shot in the hand, beaten on the head and back, and then charged with stealing mobile phones. He was initially held at the local army barracks where, he says, soldiers showed him a corpse. He couldn’t identify the dead man, so they beat him.

After being transferred to Ekpan police station in Delta State, Moses was tortured again. He says that the police beat him severely with machetes and batons, tied him up and hung him for several hours in interrogation rooms, and used pliers to pull out his finger and toe nails to force him to sign two ‘confessions’.

Moses was convicted solely on the basis of the alleged victim’s statement and ‘confessions’ obtained through torture. After eight years in prison, he was sentenced to death by hanging and remains on death row.  The use of the death penalty for crimes committed by people younger than 18 is prohibited under international human rights law.

His claims of torture have still not been investigated even though Nigeria’s constitution prohibits torture.

The pain of torture is unbearable. I never thought I would be alive till this day. The pain I went through in the hands of the officers was unimaginable. In my whole life, I have never been subjected to such inhuman treatment,’
Moses speaking in February 2014

Torture by police widespread in Nigeria

Nigeria’s constitution prohibits torture, but no provisions are made for the investigation or prosecution of acts of torture. ‘Confessions’ extracted through torture are regularly used as evidence in court, contrary to both national and international law.

The power of your support

We are calling for the Nigerian authorities to commute Moses death sentence and investigate his claims of torture by the police in Delta state.

The Delta State authorities have received a huge amount of letters, cards and emails from activists around the world so far. Because of this, the Delta State Board of Mercy visited Moses and 118 other death row inmates on 27 June 2014.

The visit is part of the due process that the Governor of Delta State must follow to exercise his constitutional powers to grant a pardon for death row inmates.

This is an important step towards Moses Akatugba's death sentence being commuted.

Moses was overwhelmed to receive so many messages of support from Amnesty members and activists. He shared this letter of appreciation and the message below expressing his gratitude:

‘I don't know the campaigners before, I have not seen them before, but I cried for help they responded massively to save me, I don't know that people still have such great love to their fellow human beings. I promise to do the same to humanity to show my gratitude to all. I prayed for them that God will replenish and bless them abundantly in everything they lay their hands on earth. I promise to work for the emancipation of torture victims and death row inmates, suffering the same injustice done to me, if I am out from prison.
I love you all.'

Please sign the petition by clicking on this link

Spread the love(Genesis 50:14 (NIV) …14 For God shall bring every END_OF_DOCUMENT_TOKEN_TO_BE_REPLACED