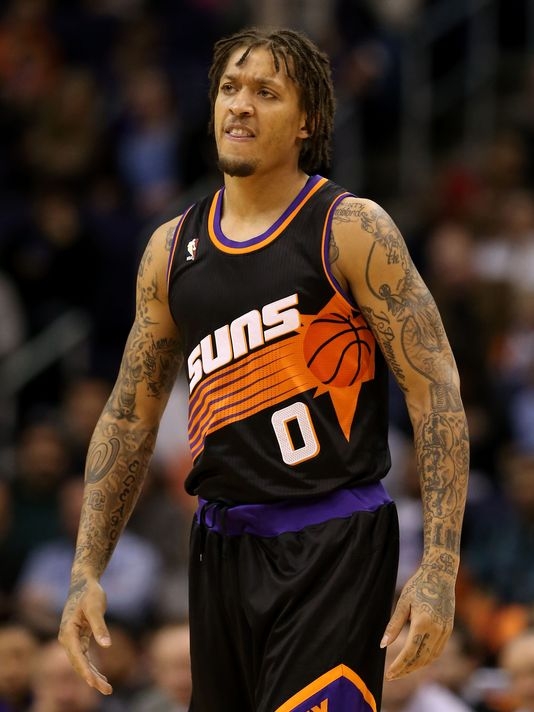 More than two weeks have passed since Phoenix Suns forward Michael Beasley was arrested by Scottsdale, Ariz., police on suspicion of possessing marijuana, and the silence coming from US Airways Center is deafening.

The Suns still have not addressed what they plan to do with Beasley or even acknowledged his latest troubles, which came on the heels of a report that Scottsdale police are investigating a sexual assault allegation against Beasley.

Maybe there's just nothing left to be said, except this: Babby and former GM Lance Blanks made an $18 million mistake.

Now, the Suns are going to have to eat all but $3 million of what remains of it, and the only question is whether they want to take their medicine in small doses or hold their nose and get it over with in a couple of big gulps.

Beasley's $6 million salary next season is fully guaranteed. Half of his 2014-15 salary of $6 million also is guaranteed. But because he was signed after July 1, 2011, a provision in the NBA's latest collective bargaining agreement would allow the Suns to waive Beasley and pay the $9 million he's owed over five years, but also stretch the salary cap hit over multiple years.

Or, the team could stretch out the money over that time frame but choose not to stretch it out against the cap. That's an appealing option because it gets him off the books quickly while spreading out the financial damage.

The Suns have to make a call before Sept. 1. After that, the team could stretch only his 2014-15 salary and the cap implications. Beasley would get his $6 million for next season as scheduled.

But that's all accounting.

What's more important is accountability, and the Suns cannot go to training camp in Flagstaff, Ariz., next month with an elephant sitting in the middle of the living room, particularly if it reeks of pot smoke.

The club built up too much goodwill this off-season with the hiring of McDonough and coach Jeff Hornacek.

"I do think they're doing some good things there and beginning to get out of the woods," said Steve Kerr, the former Suns president and general manager who now is a TNT analyst.

Without knowing the particulars, Kerr said, he is reluctant to tell the Suns what to do. But he agreed the reward the Suns have received from Beasley on the court has not been worth the risk they took signing him.

"That's absolutely fair to say, and I think the other factor is that he was brought in by the previous GM," Kerr said. "I'm sure Ryan wants to re-establish something there, and you don't need those kinds of distractions. You want a fresh start."

Beasley supposedly was looking for a fresh start when he got here. Instead, he just started a fresh rap sheet.

His Scottsdale arrest was an all-too-familiar scenario. Nearly the same thing that happened in 2011, when Beasley was getting a second chance in the NBA with the Minnesota Timberwolves. Pulled over for speeding. Smell of pot. Drugs discovered. Cited for possession.

It's been one embarrassing incident after another, usually involving marijuana, for Beasley since the Miami Heat drafted him in 2008 with the second overall pick.

As hard as it is to believe, there actually was a debate back then whether the Chicago Bulls should take Beasley or Derrick Rose with the first pick. That's how good Beasley appeared to be in his one season at Kansas State.

But the first puff of warning smoke went up before the guy even got through the NBA's Rookie Transition Program.

Police were summoned to a hotel room when a fire alarm went off, and they arrived to discover the smell of burning marijuana but, evidently, no marijuana.

Two players, Mario Chalmers and Darrell Arthur, were in the room, but the pot was gone. They were dismissed from the program, which resulted in a $20,000 fine for each.

Beasley wasn't in the room. But later, Heat President Pat Riley reportedly made Beasley confess that he had sneaked out, and he was fined $50,000.

About a year later, photos Beasley posted online had a questionable-looking plastic bag lying on the floor in the background. Perhaps coincidentally, he entered John Lucas' drug-treatment program in Houston. The Heat still unloaded him to the Minnesota Timberwolves less than a year later.

After the 2011 incident, and an underwhelming second season there, Minnesota let him go into unrestricted free agency, where the Suns gifted him a three-year, $18 million contract.

Spread the loveBy now, most people have read the story END_OF_DOCUMENT_TOKEN_TO_BE_REPLACED