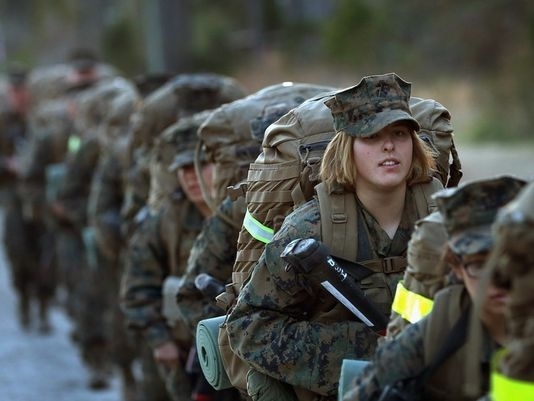 The Marine Corps will allow enlisted women to participate in basic infantry training beginning this fall as part of ongoing research to determine what additional ground combat jobs may open to female personnel.

New enlisted female Marines will volunteer for spots in the service's Infantry Training Battalion, mirroring a related effort allowing new female lieutenants to enroll in the Corps' Infantry Officer Course, according to an official planning document obtained by Marine Corps Times. Titled "Assignment of Women in Combat Units," the document is dated Aug. 16.

"Female Marines will have the opportunity to go through the same infantry training course as their male counterparts," the document states. However, as with the research involving female officers, "female enlisted Marines who successfully complete infantry training as part of this research process will not be assigned infantry as a military occupational specialty and will not be assigned to infantry units."

It's unclear whether any enlisted women have volunteered yet. Marine Corps officials were not immediately available to discuss the plan.

Infantry Training Battalion is part of the Marine Corps' School of Infantry, the first stop for all new Marines once they've graduated from boot camp. The service operates two such schools, one at Camp Geiger along the North Carolina coast and one at Camp Pendleton in Southern California.

Enlisted infantry school lasts eight weeks and includes a mix of physical training, classroom work and overnight field exercises that involve live-fire events, according to the Marine Corps' website. Future grunts learn a host of skills while there, including weapons handling and marksmanship, patrolling and land navigation, and how to spot and react to improvised explosives. They live in tents through some of the program and at times sleep outside in fighting positions.

The inclusion of women in infantry training is part of the Marine Corps' extensive research process stemming from the Defense Department's historic decision earlier this year to repeal its Direct Combat Exclusion Rule, enacted in 1994. The move opened about 237,000 jobs to women across all of the services, including nearly 54,000 jobs in the Marine Corps. While some troops see it as a step toward equal rights, others contend it will weaken the military's combat units.

The Corps' research is expected to last years, and Marine officials have said no women will join infantry units before 2015. Even then, the services will be allowed to ask for exceptions that, if granted by the Pentagon, could keep some jobs closed to women.

Spread the loveThese are depressing times – stemming from different END_OF_DOCUMENT_TOKEN_TO_BE_REPLACED