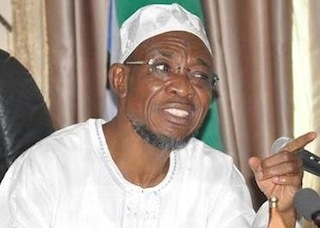 Aregbesola made this known during a high level technical meeting of the Home Grown School Feeding Programme in Abuja on Monday.

He said N12.5 million was being expended on the programme on a daily basis, adding that more than N600 million was spent on about 3,000 community caterers as transportation fare to the various schools.

The governor was at the event to share the experience of his state on the programme and how it could be replicated at the national level.

He said the programme had contributed to increased enrolment of children at the basic level.

He said the programme tagged `O’MEALS’ by the government, had also led to improvement of the health status of the pupils and had reduced incidences of school absenteeism among others.

“The programme is consistent with our goals of banishing hunger, creating work and wealth, creating functional education, restoring healthy living and engendering communal peace and progress.

“The passion, prudence and seriousness we deployed to the implementation of O’MEALS have earned us the support of the London-based Partnership for Child Development (PCD).

“Through this fruitful collaboration, we have received technical assistance in redesigning the school feeding programme through endorsement of the Transition Strategy Plan Document,” he said.

The governor noted that with the state enrolment figure of almost 253,000, O’MEALS is one programme that is worthy of every naira and kobo.

Nwaobiala said the CAADP, endorsed in 2003 was aimed at promoting the right of the African Child to education, food, freedom from hunger.

He added that it was also aimed at boosting agricultural productivity at the grassroots to improve the income of small holder farmers.

He said that convening of the meeting was timely as it would afford stakeholders the opportunity to identify the challenges militating against the effective implementation of the school feeding programme.

The Executive Director PCD, Dr Lesley Drake, said the HGSFP was gaining prominence and contributing to the achievement of the MDG Goal 1 to eradicate extreme poverty and hunger.

Previous Post A NATION AFFLICTED: I have had enough. I say goodbye Nigeria: give us Oduduwa or let us die- Femi Fani-Kayode
Next Post Death toll in Jos twin bomb blasts rises to 118• Jonathan, Jang condemn act -Tribune