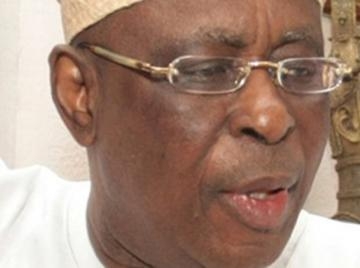 A national leader of the All Progressives Congress (APC), Chief Olusegun Osoba, on Thursday, vowed not to work with Governor Ibikunle Amosun and his faction of the party in the state.

Osoba said this while addressing his loyalists at a stakeholders’ meeting held at his residence at Ibara GRA, Abeokuta, saying the simmering crisis in the party had reached a point of no return, as the meeting kicked against sharing of party offices with the governor’s faction.

The former governor of the state directed his loyalists which included the three senators representing the state at the National Assembly, Adegbenga Kaka, Akin Odunsi and Gbenga Obadara and six other members of the House of Representatives and other members of the party to commence the compilation of a new members’ register in the 236 wards in the state.

It will be recalled that the party in the state held parallel congresses in April which was a clear indication that all was not well with the party.

He said: “Your exco members met me and said that you (members) have resolved not to work with anyone again; that you have resolved to go it your own way.

“I now give you my words, I pledge in the name of God and Jesus Christ who I worship that we have gone beyond anybody begging us. If thousands come prostrating before me, what you members have decided is what I will adhere to and do.”

He faulted the setting up of an elder’s committee by the national leadership of the party, contending that the case was too big for such committee to look into, “they are only looking for sentiments; they are looking for ways to eat you up. Let them go their way.’’

“They said they have set up elders committee, don’t mind them,  I don’t know who is older than me politically amongst them. None of them is closer to Awolowo than I was.  I wined and dined with him. I don’t have confidence in those people up there again. They are interested in eating you up, don’t allow them to deceive you again. When they come, they would not meet me,  it is you the  exco that they will meet  and you will tell them what is on ground,  it is not the issue of party,  when did we format APC,  not up to a year,  you people are vehicle. We have dropped the traitors and the betrayers.”

On the claim of Governor Amosun that he had done so much to satisfy him (Osoba), the former governor said that, “How can anyone quantify the money I’ve spent during elections since 1988? Can money buy my good name?”

He directed his loyalists to go back to their wards and compile new members register, while saying that he had secured the assurances of the members of the party in the state who had defected to the opposition to return once the coast to the “Promised Land” became clearer for his loyalists.

Osoba also said that he would commence a tour of the state to consult with his loyalists on next line of action.

Spread the loveBy now, most people have read the story END_OF_DOCUMENT_TOKEN_TO_BE_REPLACED