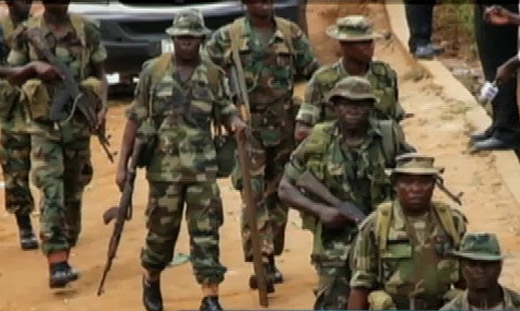 Military operatives from Nigeria's neighbours Cameroon, killed at least 40 Boko Haram militants in the country’s northwest during the weekend, a government radio reported on Sunday.
The Nigerian government on Saturday described the Central African nation as the weakest link in its fight against the terrorist sect.
The Cameroonian military clashed with members of the Boko Haram sect  in the town of Kouserri, which borders Nigeria and Chad.
After a security summit in Paris two weeks ago, Cameroon revealed that it had deployed 1,000 troops to its border to help contain the activities of the deadly group.
But Sarkin-Yaki Bello, the Coordinator-General of Nigeria’s Counter Terrorism Centre, said was quoted by Reuters news agency, Saturday, as criticising Cameroon’s effort in rooting out Boko Haram.
“Niger has been proactive and aggressive, Chad has shown zero tolerance for Boko Haram,” Mr. Sarkin-Bello said.
“Cameroon, we’ve engaged them to be more pro-active. They haven’t really. Not yet.”
One Cameroonian official denied the allegation, while another blamed funding for the country’s slow response.
Under a pact reached at the Paris summit, Cameroon, Chad, Niger and Benin- all Nigeria’s neighbours, are to step up their action against Boko Haram by maintaining an intelligence sharing platform, improving border patrols, and coordinating their actions.
Currently, Niger allows Nigerian soldiers cross into its borders to pursue Boko Haram militants.
A similar understanding is being worked out with Chad, but there's none presently with Cameroon.
Boko Haram has remained under an international spotlight after abducting over 200 schoolgirls from Chibok in Borno State.
The girls have continued to remain in captivity as the Nigerian government, assisted by major world powers, is yet to rescue them.