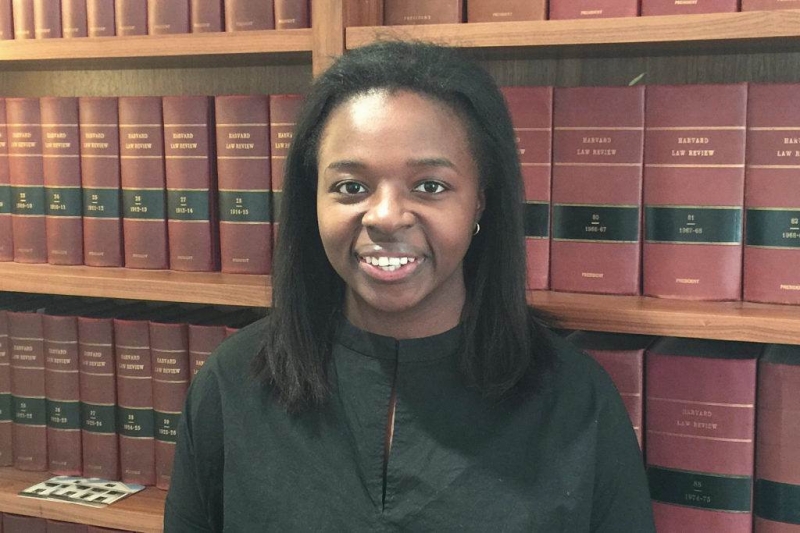 The Harvard Law Review's 131st president is also in some ways, a "first".

ImeIme Umana made history when she was elected the first Black female president, following behind a pretty famous law review president who made history 27 years ago. In 1990, former President Barack Obama became the publication's first Black president as a law student, at 28.

The Harrisburg, Pennsylvania native received a Bachelor's degree in African American Studies and Government from the Harvard College in 2014 and is a 3rd year student at Harvard Law School as well as the Harvard Kennedy School of Government.

She has been actively involved in politics and law on campus as Community Action Chair of the Harvard University Institute of Politics, Professional Developmental Chair for Public Interest for the Harvard Black Law Students Association, and criminal law intern for Public Defender Service.

"It is a great privilege to be able to serve and work with the remarkably talented and committed group of editors on the Law Review," Umana said in a statement.

Outgoing Harvard Law Review president Mike Zuckerman is sure Umana will excel in her new role. "I've been blown away by ImeIme since she was an undergraduate in Harvard's Lowell House, and it has been thrilling to watch the Law Review's membership recognize so heartily what a special human being she is," Zuckerman said in a statement. "I am excited for all of the amazing work that she will do for our institution in the year ahead."

The journal has face criticism in the past for lack of diversity among it's editorial board. Last year the Harvard Law Review inducted it's most diverse class of editors in history, with 41 percent of them being students of color according to the The Crimson.

"The descriptive stats of the Review haven't historically been inclusive and so that may signal to some people that it's not an inclusive place, because it didn't have an inclusive membership," said Umana as a Harvard Law Review editor in an interview with The Crimson. "One of the best ways to signal inclusion is to, in fact, diversify the membership."

The university came under fire in 2015 when someone defaced photos of a number of Black Harvard Law Professors, covering their portraits with black

Previous Post Africa’s Contribution To Contemporary Western Civilization – A Perspective
Next Post The Politics of State Robbery In Nigeria, By Chido Onumah