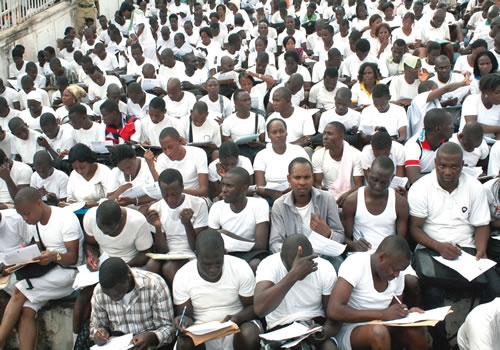 •Pregnant women among the dead, as youths besiege venues
IT  was one of the most devastating moments for job seekers that converged on various parts of the country to fill up vacancies in the Nigeria Immigration Service (NIS) on Saturday.

In Abuja, a pregnant woman and nine other job-seekers were killed with dozens injured in a stampede during the exercise held at the National Stadium.

Sunday Tribune, which monitored the exercise in Abuja, reports that thousands had thronged the venue for the examination.

An eye witness told Sunday Tribune that the stampede started as applicants surged towards a central stage when the only entrance to the 60,000-capacity stadium was opened.

Others who narrated the cause of the deaths to Sunday Tribune said that the anxious job seekers resorted to jumping into the stadium through the fences and the melee which was created by the situation resulted in the trampling of about seven people on the spot while many more sustained various degrees of injuries.

However, authorities of the National Hospital, Abuja, on Saturday, confirmed seven persons among the applicants dead.

Mr Tayo Haastrup, the spokesman for the hospital, told the News Agency of Nigeria (NAN) that the seven: five women and two men were brought in dead and that the bodies had been deposited at the mortuary.

When contacted the FCT Police Public Relations Officer,  DSP Alteni Daniels, refused to comment on the development.  She said immigration officers would be in a better position to speak on the issue.

Applicants collapse in Ibadan
In Ibadan, the Oyo State capital, applicants reported at the Liberty Stadium. Sunday Tribune reliably gathered that over 20,000 applicants, some of whom had reported to the venue a day before.

Applicants were allowed into the venue at 7 a.m. on the day of the examination. However, things took a downturn when some of them, out of exhaustion and following a stampede, fainted. Others who could not bear the heat of the sun left the venue, insisting that the exercise was not worth the while.

The examination which was split into two sessions had applicants with degree qualification take the first slot while those with National Diploma (ND), National Certificate of Education (NCE) and Senior Secondary School Certificate (SSCE) holders.

The first batch wrote theirs at exactly 2 p.m. while the second batch was yet to commence theirs as at the time of filing this report. Many of the applicants decried the tardiness of the exercise.

Three die in Edo
No fewer than three lives were feared lost at the Benin venue of the recruitment test. The Comptroller of Immigration in Edo State, Mr Moses Malo, however, said that only one life was lost, adding that about 26,000 applicants were expected at the Benin recruitment centre.

He said he gathered that the victim was a woman, who was delivered of a baby through a Caesarean section, about two weeks ago.

Sunday Tribune gathered that the woman died before she could get to the hospital after collapsing at the Samuel Ogbemudia Stadium, venue of the exercise.

The stadium with a capacity of about 20,000 was filled, while the pitch, the track and terraces were filled with the applicants who were all dressed in an all white trainers, shorts and T-shirts.

An officer of the Nigeria Security and Civil Defence Corps (NSCDC), who craved anonymity, however, informed Sunday Tribune that no less than three persons lost their lives at the recruitment venue.

At a point during the exercise, gunshots were fired into the air to control the crowd, even as none of the categories of examination was yet to be conducted at about 4pm.

Sokoto records 10,000 applicants
Comptroller of the Nigeria Immigration Service, Sokoto Command, Yunusa Aliyu, on Saturday, said no fewer than 10,000 candidates would participate in its recruitment in the state.

Aliyu told the NAN at the pre- examination screening holding at the Immigration Staff and Command College, Sokoto.

According to Aliyu, the candidates would write the examinations at 4 p.m. in four different categories.

32,800 applicants participate in Kano, Benue
No fewer than 15,000 people participated in the recruitment exercise in Kano. The NIS comptroller in the state, Zitas Nanpon, made this known in an interview with NAN in Kano.

NAN reports that the screening and examination took place at the Sani Abacha Stadium, located in Kofar Mata in Kano metropolis.

“Right now, not less than 15, 000 applicants are on ground and more are still coming into the venue.

“The standard is that everybody that has an acknowledgement slip is eligible for this exercise,” he said.

In Benue no fewer than 17, 800 applicants took part in the exercise at the Aper Aku Stadium, Makurdi.

Rivers: 5 feared dead, others lose certificates, valuables
Also, five persons, including a pregnant woman, were feared dead, while scores of others injured during a stampede which occurred at the recruitment exercise of the Nigerian Immigration Service (NIS) held at the Liberation Stadium, Port Harcourt, Rivers State.

Tragedy occurred when over 23, 000 applicants that were invited for the interview and who had gathered at the 15,000 capacity-stadium were struggling to gain entrance into the stadium for the conduct if the exercise.

While many of the applicants had arrived the venue of the exercise as early as 7am, they were not allowed entrance by security operatives who had locked the two gates leading to the main bowl of the stadium.

Nurses, who were in the stadium as part of the medical team on ground to provide emergency service, were also reviving some of the unconscious applicants with oxygen mask, while others in critical situation were rushed in an army ambulance, with registration number NA 307 EOI  and two police operational Toyota Hilux vans.

Some of the applicants lost their original certificates including their degrees and the National Youth Service Corps (NYSC), discharge certificate, during the stampede, while passport photographs, photocopies of resumes and certificates littered the venue of the exercise.

However, spokesperson of NIS, Mr Bisong Abang, denied that five persons died from the stampede that ensued at the Liberation Stadium, insisting that all those who sustained injuries where attended to by the medics present at the stadium, while others were taken to the hospital for further treatment.

2 applicants slump in Osun
Similarly, there was mild drama, in Osogbo, the Osun State capital at the recruitment exercise when two of the applicants, who had been waiting for several hours, slumped as a result of exhaustion.

The applicants who had converged on St Charles Grammar School, Osogbo, venue of the exercise as early as 7 a.m. did not start the recruitment process until 3.00pm.

Sunday Tribune gathered that two of the applicants who slumped were quickly rushed to the Red Cross stand where they were treated inside a waiting ambulance.

One of the applicants, Odeyinka Abiola, who spoke said the exercise was not well organised, blaming the management of the Nigeria Immigration Service for not making adequate preparation for the conduct of the exercise.

2 die, 7 hospitalised in Minna
Also, no fewer than two out of about 11,000 applicants were believed to have been dead at the Women Day Secondary School, venue of the exercise in Minna.

It was further gathered that the unfortunate incident happened during a stampede, following the accreditation process by the Niger State Command of the Service.

Further checks revealed that when the officials were allegedly unable to put the situation under control, they were said to have opened tear gas canisters and in the process seven persons allegedly fainted, gasping for breath and were quickly rushed to the hospital after which three persons were confirmed dead by medical personnel on duty.

Spread the love  “Life’s most persistent and urgent question is, END_OF_DOCUMENT_TOKEN_TO_BE_REPLACED