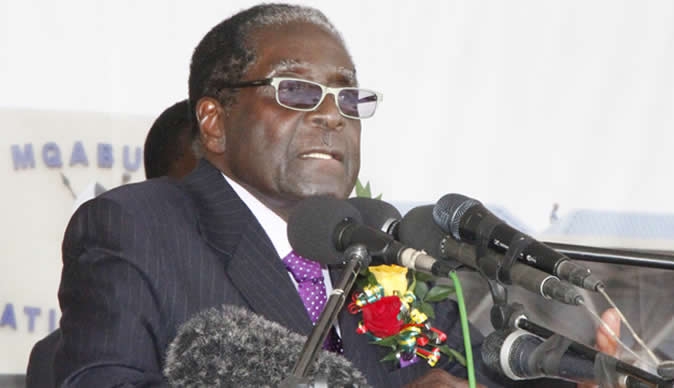 Speaking at his 90th birthday luncheon hosted for him by the service chiefs and the public commission, President Mugabe said Zimbabweans are now almost behaving like Nigerians who have to be corruptly paid for every service.

"Are we now like Nigeria where you have to reach your pocket to get anything done," he said. "You see we used to go to Nigeria and every time we went there we had to carry extra cash in our pockets to corruptly pay for everything. You get into a plane in Nigeria and you sit there and the crew keeps dilly dulling without taking off as they wait for you to pay them to fly the plane," said the president followed by a huge laugh from the delegates attending his birthday bash.

Contrary to the President, the current corruption rankings in the world rank Zimbabwe's corruption a lot worse than Nigeria. Nigeria are ranked 163 worst corrupt country in the world while Zimbabwe is an embarrassing 170 third from the bottom.

Last year Nigeria was corruptly involved at $3 billion, while Zimbabwe was at $2 billion. Put into context, if the Nigerian economy is considered against the Zimbabwean economy then only do the figures make sense.

Last year, Zimbabwe's GDP was about $6m and $2m was lost to corruption while Nigeria had a GDP of $15m and only $3m lost to corruption. This comes as government has indicated that it will employ yet another economic blueprint dubbed Zimbabwe Agenda for Socio-economic Transformation (Zimaset) at a time when corruption has ravaged the meagre financial resources within the economy.

The country cannot have economic development and attract foreign direct investment (FDI) needed in Zimaset if there is no attention to detail when it comes to bribery and corruption and its joked about at high levels of government. Government needs to understand that whilst its putting together a programme for socio- economic transformation at the same the little resources that we have are being drained through corrupt and unethical conduct the country goes nowhere.

The President has repeatedly warned of stern action taken against Members of Parliament and Government officials found involved in corruption. In his speech on Friday he claimed that a cabinet minister and a member of parliament had corruptly sourced $120 000 from a would be foreign investor. The country waits to see these two culprits named, shamed, arrested and imprisoned.

Late last year the President openly named ZMDC Director General Goodwill Misimiirembwa on a $6M corruption case and promised to have him thrown into prison which never happened.