El-Sisi Is The Putin Of Egypt 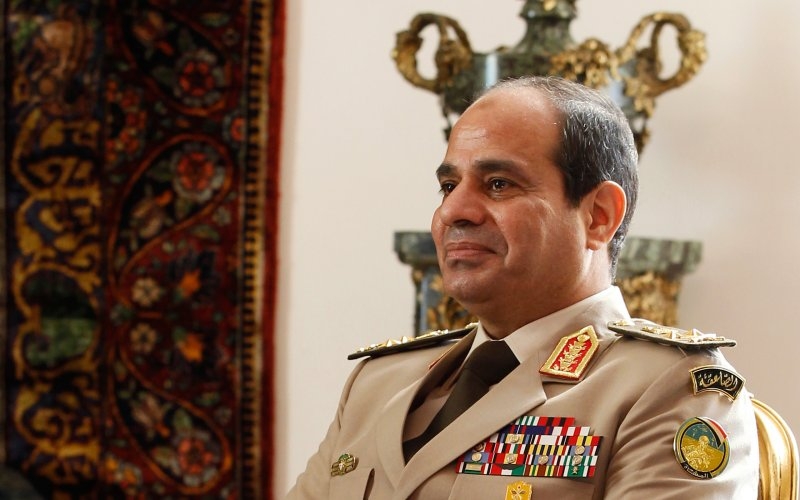 It isn’t hard to imagine Russia’s czar Vladimir Putin backslapping and sharing ribald jokes with the likes of Italy’s Silvio Berlusconi, as the pair are rumored to have done. (“I love all Russian women…the only ones who may compete with them are Italians”, Putin quipped at one especially notable joint press conference with the then-Italian premier.) But it’s more difficult to picture the buttoned-up strongman of Egypt, Field Marshal Abdel Fattah el-Sisi, engaging in such crude humor—or parading shirtless for a virile photo op, an activity that clearly counts among Putin’s favorite pastimes.

But of all the world leaders out there today, el-Sisi is perhaps the most like the Russian leader, at least if you take into account their personal beginnings and their respective rises through the ranks of power. And these commonalities could give the West some crucial hints about how el-Sisi—who is expected to declare his presidential bid any day now—might run a post-Arab Spring Egypt, one that has already shown a willingness to engage in warmer relations with Moscow.

The burgeoning relationship between the two powers might well prove worrisome for the United States as Putin seeks to rebuild Russian influence in the Middle East, clout that was lost after the collapse of the Soviet Union. America spoke out harshly against el-Sisi’s de facto coup last summer, curtailing military aid to Egypt after the army ousted the country’s first democratically-elected president, Mohamed Morsi. As a result, Cairo’s infuriated generals have been eager to forge a “strategic realignment” with Gulf powers and with the Kremlin.  In November, Egyptian Prime Minister Hazem el-Beblawi pointedly evoked Egypt’s Nasser-era alliance with the Soviets: “Egypt went with the Russian military for support and we survived,” he remarked.

El-Sisi got an additional boost during a visit to Moscow last week, when Putin endorsed the newly-minted Field Marshal’s likely bid for the presidency. “I know that you have made a decision to run for president” Putin told the military man. “That’s a very responsible decision to undertake such a mission for the fate of the Egyptian people…I wish you luck both from myself personally and from the Russian people.” Putin also gave the Egyptian official a black jacket with a red star on it, which el-Sisi wore during the trip.

It’s unknown whether they discussed their backgrounds, but they would have found much in common. Both come from modest means: Sisi’s father owned a small shop in Cairo, while Putin was the son of a skilled laborer at a train car factory. Both lived in communal apartments as children, and as young men both gravitated towards the most powerful institutions in their closed societies, the KGB and the Egyptian army. They each rose cautiously up the bureaucratic ladder to the position of security chief—and later betrayed the patrons who promoted them.

Neither Putin nor el-Sisi enjoyed powerful family connections, but what they lacked in birthright, they made up for with mastering their countries’ confined and secretive security apparatuses. The KGB and the Egyptian army were institutions that rewarded circumspection and loyalty. Putin and el-Sisi were content to oblige, earning the reputation of cautious careerists, careful not to offend, highly dutiful and unquestioning. They were what the British would call “solid.” Their promotions were more methodical than stellar, and Putin’s was disrupted by the collapse of Communism, necessitating a departure from active service before an eventual return to the KGB’s successor, the FSB. They each found themselves at a point in history where they’d missed their country’s glory years—El-Sisi was too young to have served in combat in Egypt’s wars with Israel and the KGB was in retreat when Putin got stationed in Germany. Most of their intelligence work involved spying on internal threats to their governments.

Later, when they has risen to prominence, it appeared to their colleagues that they had come out of nowhere and somehow managed to be in the right place at the right time, felicitously handpicked for prominence by men who thought they could be trusted. Boris Yeltsin and his inner circle of family members and oligarchs pushed forward Putin as the president’s successor, assuming he would be loyal to their business interests. Likewise, Sisi was handpicked by Morsi to head Egypt’s military over the controversial Field Marshal Mohamed Hussein Tantawi, who had been close to the deposed dictator Hosni Mubarak. Both Yeltsin’s pals and Morsi must have been duly surprised when they found themselves neutered by their own puppets. Some analysts see them as “deep state avengers”—leaders devoted to protecting the privileges and political and business interests of two states with states, the FSB and the Egyptian military.

It was this intense belief in and devotion to the idea of the state machine, a machine that controls the people and not visa versa, that characterized both men from a young age. Putin wrote about it in his thesis at St. Petersburg University, while el-Sis expressed similar views in a paper written while he was studying at the U.S. Army College in Pennsylvania.

Two authoritarians who move with the stiff gaits of military men and convey an impression of contained power. Two populist nationalists who praise the institutions that nurtured them and see them as synonymous with the state. Two rulers with a similar way of looking at the world. The West has seen what Putin has done with Russia during his successive terms in office. Could it be a harbinger of what el-Sisi hopes to accomplish in Egypt? In any case, there’s every reason to think that el-Sisi’s recent visit to the Putin dacha in Novo-Ogarevo will not be his last.