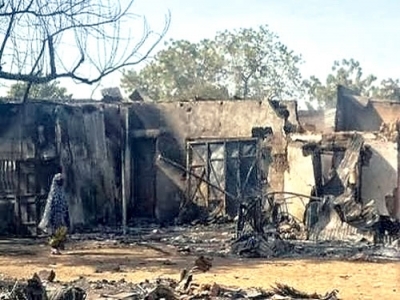 The death toll in the latest Boko Haram attack against sleeping secondary school students of Federal Government College, Buni Yadi in Yobe state, has increased to 59, from the 43 earlier given by officials.

The revised toll even came with the chilling story that the students were burnt to death.

“Some of the students’ bodies were burned to ashes,” Police Commissioner Sanusi Rufai said of the attack.

Bala Ajiya, an official at the Specialist Hospital Damaturu, told Reuters by phone the death toll had risen to 59.

“Fresh bodies have been brought in. More bodies were discovered in the bush after the students who had escaped with bullet wounds died from their injuries,” he said.

Rufai said all those killed were boys. He said the school’s 24 buildings, including staff quarters, were completely burned to the ground.

President Goodluck Jonathan has condemned the killing of about 40 secondary students at a college in Yobe State, North East Nigeria early Tuesday by men suspected to be members of Boko Haram insurgent group.

In a statement signed on his behalf by Reuben Abati, his spokesperson, the President described the murder of the student as callous and senseless even as he promised that the Nigeria armed forces will continue to fight the terrorists with full vigour.

The President condoled with the parents and family members of the students in the statement.

The full statement reads: “President Goodluck Ebele Jonathan has received with immense sadness and anguish, news of the callous and senseless murder by terrorists of scores of students at a college in Yobe State in the early hours of today.

“On behalf of himself and the Federal Government, President Jonathan extends heartfelt condolences to the parents and relatives of the murdered students.

“The President wholly condemns the heinous, brutal and mindless killing of the guiltless students by deranged terrorists and fanatics who have clearly lost all human morality and descended to bestiality.

“He assures the nation that his administration will not relent in its ongoing efforts to end the scourge of terrorism in parts of the country which has sadly claimed more innocent lives today.

“The Armed Forces of Nigeria and other security agencies will continue to prosecute the war against terror with full vigour, diligence and determination until the dark cloud of mass murder and destruction of lives and property is permanently removed from our horizon.

Spread the loveAs the nations of the world endeavor to END_OF_DOCUMENT_TOKEN_TO_BE_REPLACED