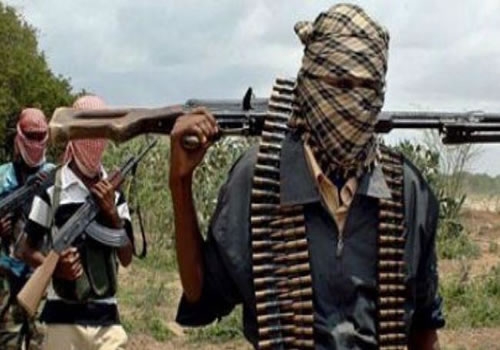 TWO members of the Islamic militants arrested on Wednesday at Miri ward, behind University of Maiduguri, by members of the vigilance group, Civilian Joint Task Force (JTF), confessed that most of them are fleeing the Sambisa forest, owing to a new development in the forest, which they believe is a spiritual attack.

According to Kolo Mustapha, one of the suspected members of the sect, snakes are now attacking them in the  Sambisa forest.

“Most of us are fleeing because there are too many snakes in the forest now. Once they bite, they disappear and the victims do not last for 24 hours. We were told that the people of Chibok Local Government Area are the ones turning into snake and attacking us in the forest,” he said.

The suspect stated further that some of their leaders had escaped to Cameroon, because “they are known to the Nigerian authorities and are easily identified.”

According to him, some of them who had lived in Maiduguri all their lives had nowhere to go, other than to return and sneak into town.

“We came in last night and were trying to hide in some uncompleted buildings when some members of the Civilian JTF saw us. After we were arrested, some of the group members were able to identify us.

“We are pleading with them to spare our lives. We were forced to join the sect, but we know that it is not the right way. I have never killed anyone, but my friend here has killed many people,” he said.

Umar Abor, the other suspect, said Mustapha was saying half truth, adding that “all of us participated in all heinous acts of the sect in the past.

“We have fought together since 2010. We fought in Marte, Bama, Buni Yadima and Gwoza. We were not in Chibok, we have not seen the girls, but we heard about it. Our leaders have been talking about it and we have been following news from the radio.

“We decided to flee when almost all our comrades were leaving the Sambisa because of constant attacks by snakes, which we were told was as a result of abducted Chibok girls.

“They (our leaders) told us that it was the people of Chibok that are hunting us through diabolical means in the form of snakes. We were in the forest in 2010 and 2011 and we left and came back last year.”

They promised that if they were spared, they would help the community in fishing out some of their leaders and would lead authorities to places some other sect members had fled to for safety.

Ali Musa, leader of the Civilian JTF at Bama Road, told the Nigerian Tribune that many of the sect members had been fleeing the Sambisa forest since the last two weeks, adding that those arrested were being handed over to authorities, except some of them who proved stubborn and were killed.

Spread the love(Genesis 50:14 (NIV) …14 For God shall bring every END_OF_DOCUMENT_TOKEN_TO_BE_REPLACED