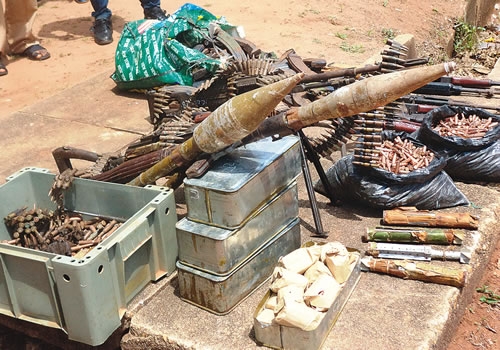 THE Defence Headquarters on Friday announced an escalation of gun battle with the Boko Haram sect in Borno State after the capture of those it described as leaders of the terrorist organisation.

A statement signed by the Director of Defence Information, Major-General Chris Olukolade, said the gun battle, which occurred on Thursday night, led to the killing of over 40 terrorists and four soldiers.

“The capture of a number of terrorists believed to be the ringleaders of those operating around Alagarmo sparked off a major fight in the outskirts of Bulanbuli, Borno State, last night. Over 40 terrorists died in the encounter while four soldiers lost their lives and nine were wounded.

“More than 16 rifles and a substantial number of assorted calibre of ammunition, Improvised Explosive Devices (IED) materials, SIM cards and electronic items have so far been recovered.

“Two of the terrorists were earlier arrested at a local market two days ago while trying to procure foodstuff, while others were spying on the military base in the area. Others still being trailed include a terrorist medic who was on a mission to procure drugs for use by his colleagues,” the statement disclosed.

Bulanbuli is between Alagarmo and Sambisa Forest where the terrorists have been attempting to establish a stronghold in their campaign.

School principal faces probe over school girls‘ abduction
Meanwhile, as efforts to free the school girls abducted from the Government Girls Secondary School, Chibok, Borno State, continued on Friday, military authorities have begun a probe of the Principal of the school, Mrs. Asabe Kwambula, over her role in the event.

A top defence source told Saturday Tribune on Friday that the military had resolved not to join issues with “politicians and others” on the unfortunate incident but had made significant progress in the operation to free the abducted girls.

“The military will not join issues with anyone on the unfortunate case of the abducted school girls. The operation to rescue them is on. Arrests have been made. We have also noticed some signs of collaboration between the abductors and the local people in the area. A lot of efforts have gone into the operation.

“Major assault could not be unleashed because of the likely collateral damage that could result from such an operation because there are law-abiding citizens living and eking out their livelihood in the area.

“We are also investigating the school principal in the light of her constantly changing stories on the manner of the kidnap of the girls and also on the actual number of those abducted,” he said.

Mrs. Kwambula initially claimed the girls were abducted at gun point, but later said she was made to believe that they (abductors) were genuine soldiers with instructions to take the students to safety from an impending attack.

The number of the abducted girls was also initially put at 129 but this was increased to 234 about a week later.

According to the security source, “the general circumstance of the case is receiving due attention and this includes the manner of escape of those who have been found among the girls.”

Commenting on the issue, the Special Adviser on Media to the Borno State Governor, Alhaji Isa Umar Gusau, told Saturday Tribune: “For the records, you are aware that the president hosted an expanded National Security Council meeting yesterday (Thursday) in the Aso Rock Villa, which was attended by Governor Kashim Shettima. One of the resolutions of that meeting was an order given to the security agencies to free these girls, which they promised to do.

“(They) said they were closing in on the abductors. All newspapers, including the Nigerian Tribune, reported this today. This clearly means that the issue has since become a national one, as it should be, and is being handled by the National Security Council.”

The Thursday expanded National Security Council meeting, presided over by President Goodluck Jonathan, had given a marching order to the military to ensure the release of the abducted schoolgirls.

It was attended by state governors, service chiefs, heads of security agencies as well as the President of the Christians Association of Nigeria (CAN), Pastor Ayo Oritsejafor, and the Sultan of Sokoto, Alhaji Saad Abubakar.

After the meeting, Governor Kayode Fayemi of Ekiti State told newsmen: “The meeting agreed that the issue of the moment is Chibok and the abduction of the children and we must do everything to ensure that the abducted children are retrieved and rehabilitated and returned to their parents.”

He also disclosed that the meeting frowned on the rising partisanship in dealing with security issues and cautioned political leaders against “unguarded utterances.”

“As Nigerian leaders, the meeting agreed that it is absolutely important for us to tackle security issues in an objective manner and with restraint, avoiding hasty speeches, and anything that will heat up the polity.”

The Ekiti State governor said further that the meeting also stressed the importance of security agencies being scrupulously professional and non-partisan in the way they perform their duties.