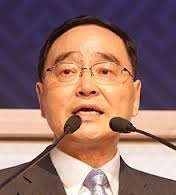 South Korea’s Prime Minister Chung Hong-Won tendered his resignation Sunday over the sinking of a passenger ferry that left more than 300 people dead or missing.

“I offer my apology for having been unable to prevent this accident from happening and unable to properly respond to it afterwards,” he said.

“I believed I, as the prime minister, certainly had to take responsibility and resign.”

The Sewol, a large passenger ferry, capsized with 476 people — many of them schoolchildren — on board when it was en route to the southern resort island of Jeju on April 16.

The confirmed death toll from the tragedy stood Sunday at 187, with 115 unaccounted for.

The government, along with almost all other branches of officialdom, has come in for fierce criticism over the disaster, and the handling of the rescue operation.

“The latest accident left all South Koreans in great shock and sorrow. (Many) days have passed since the accident, but the screams of families of the missing still keep me up at night,” Chung told a nationally-televised press conference.

“Dear South Koreans, this is no time to point fingers at each other but a time to complete rescue operations and properly handle its aftermath. I plead with you to help overcome this difficult situation.

“I sincerely hope that South Koreans and families of the Sewol victims will forgive and understand me for being unable to fulfil my obligations until the end. I beg you once again to rally support (for rescue operations).”

Although all hope of finding survivors has been extinguished, there is still anger and deep frustration among relatives of the missing over the pace of the recovery operation.

All 15 surviving crew members responsible for sailing the vessel are now in custody and face charges ranging from criminal negligence to abandoning passengers.

The official probe has focused on a long delay by the ship’s captain in issuing the evacuation order, as well as on the ferry’s overloaded cargo and possible inaccuracies in the passenger headcount.

Prosecutors have raided a host of businesses affiliated with the ferry operator, the Chonghaejin Marine Company, as part of an overall probe into corrupt management.

The widening investigation has also seen travel bans put on eight current and former executives of the Korea Register of Shipping — the body responsible for issuing marine safety certificates.

“I wanted to resign earlier but handling the situation was the first priority and I thought that it was a responsible act to help before leaving,” said Chung.

“But I’ve decided to resign now not to be any burden on the administration,” he said.

Spread the love  “Life’s most persistent and urgent question is, END_OF_DOCUMENT_TOKEN_TO_BE_REPLACED