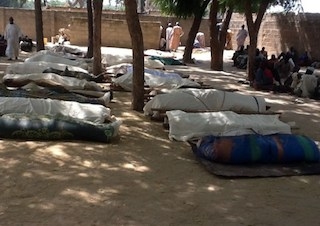 The blasts hit a densely populated area of the city and sent residents fleeing in panic.

“The first blast happened at 6:15 p.m. and targeted residents… Other residents mobilised to the scene to assist the victims and that was when the second blast happened,” local resident Buba Ibrahim told AFP.
T
he eyewitness, Malam Mohammed Buba, said that the blasts occurred around 6 p.m. when most residents were preparing for the evening prayer.

“Nobody can say exactly how it happened, the first blast occurred just about 15 minutes before the second one.

The Commissioner of Police in Borno, Alhaji Lawal Tanko, confirmed the blasts, saying that 35 bodies had been evacuated so far.

“We are still counting, so far we have counted 35 bodies. Our men are still working with rescue workers at the scene’’ Tanko said.

Emergency services were at the scene, said a security official who did not want to be named.

Local car mechanic Dahiru Sadiq said he was at work when he heard the blasts, which sent him and his customers running for their lives.

“I can see smoke and flames across the road though I don’t know which building is on fire,” he said.

Maiduguri, the capital of Borno state in the volatile northeast, has been the epicentre of Boko Haram Insurgency since 2009.

In January, a popular telecoms market in the city was rocked with explosion, leaving dozens of people dead.

Spread the loveBuhari’ government through the ministry of finance took END_OF_DOCUMENT_TOKEN_TO_BE_REPLACED