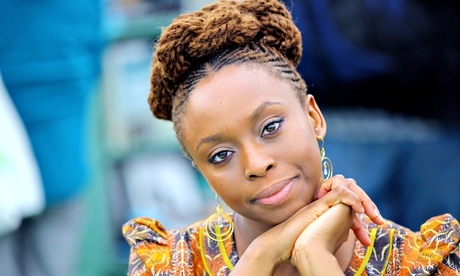 What’s the difference between an African-American and an American-African? From such a distinction springs a deep-seated discussion of race in Chimamanda Ngozi Adichie’s third novel, “Americanah.” Adichie, born in Nigeria but now living both in her homeland and in the United States, is an extraordinarily self-aware thinker and writer, possessing the ability to lambaste society without sneering or patronizing or polemicizing. For her, it seems no great feat to balance high-literary intentions with broad social critique. “Americanah” examines blackness in America, Nigeria and Britain, but it’s also a steady-handed dissection of the universal human experience — a platitude made fresh by the accuracy of Adichie’s observations.

So an African-American is a black person with long generational lines in the United States, most likely with slave ancestors. She might write poetry about “Mother Africa,” but she’s pleased to be from a country that gives international aid rather than from one that receives it. An American-African is an African newly emigrated to the United States. In her native country, she didn’t realize she was black — she fit that description only after she landed in America. In college, the African-American joins the Black Student Union, while the American-African signs up with the African Students Association.

Adichie understands that such fine-grained differentiations don’t penetrate the minds of many Americans. This is why a lot of people here, when thinking of race and class, instinctively speak of “blacks and poor whites,” not “poor blacks and poor whites.” Many of Adichie’s best observations regard nuances of language. When people are reluctant to say “racist,” they say “racially charged.” The phrase “beautiful woman,” when enunciated in certain tones by certain haughty white women, undoubtedly means “ordinary-looking black woman.” Adichie’s characters aren’t, in fact, black. They’re “sable” or “gingerbread” or “caramel.” Sometimes their skin is so dark it has “an undertone of blueberries.” 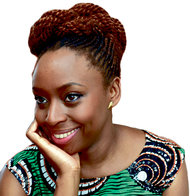 “Americanah” tells the story of a smart, strong-willed Nigerian woman named Ifemelu who, after she leaves Africa for America, endures several harrowing years of near destitution before graduating from college, starting a blog entitled “Raceteenth or Various Observations About American Blacks (Those Formerly Known as Negroes) by a Non-­American Black” and winning a fellowship at Princet­on (as Adichie once did; she has acknowledged that many of Ifemelu’s experiences are her own). Ever hovering in Ifemelu’s thoughts is her high school boyfriend, Obinze, an equally intelligent if gentler, more self-effacing Nigerian, who outstays his visa and takes illegal jobs in London. (When Obinze trips and falls to the ground, a co-worker shouts, “His knee is bad because he’s a knee-grow!”)

Ifemelu and Obinze represent a new kind of immigrant, “raised well fed and watered but mired in dissatisfaction.” They aren’t fleeing war or starvation but “the oppressive lethargy of choicelessness.” Where Obinze fails — soon enough, he is deported — Ifemelu thrives, in part because she seeks authenticity. Never has Ifemelu felt as free as the day she stops hiding her Nigerian accent under an American one, the accent that convinces telemarketers she is white. She refuses to straighten her hair (a favorite Web site is HappilyKinkyNappy.com), even if she must endure muttered disparagements from African-Americans when out with a white man — “You ever wonder why he likes you looking all jungle like that?”

Early on, a horrific event leaves Ifemelu reeling, and years later, when she returns to Nigeria, she’s still haunted by it. Meantime, back in Lagos, Obinze has found wealth as a property developer. Though the book threatens to morph into a simple story of their reunion, it stretches into a scalding assessment of Nigeria, a country too proud to have patience for “Americanahs” — big shots who return from abroad to belittle their countrymen — and yet one that, sometimes unwittingly, endorses foreign values. (Of the winter scenery in a school’s Christmas pageant, a parent asks, “Are they teaching children that a Christmas is not a real Christmas unless snow falls like it does abroad?”)

“Americanah” is witheringly trenchant and hugely empathetic, both worldly and geographically precise, a novel that holds the discomfiting realities of our times fearlessly before us. It never feels false.