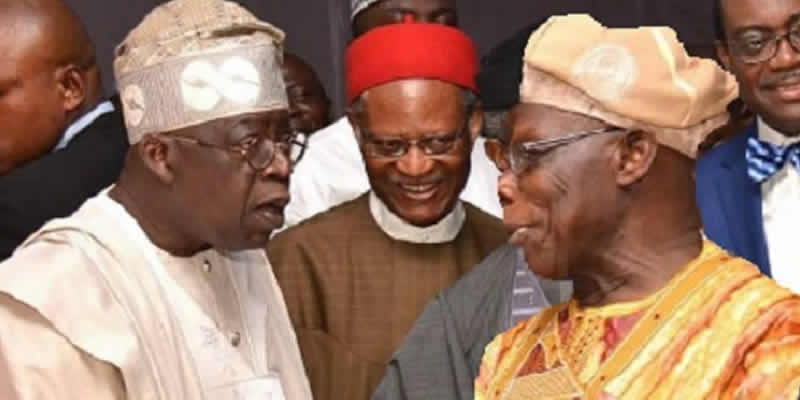 Bola Ahmed Tinubu is an ugly and repugnant little creature who lives in and presides over the affairs of Lagos state.

He comes from a long line of slave-dealers even though he is of questionable parentage. He hails from a small town in Osun state called Iragbiji and many claim that his real name is not Bola Ahmed Tinubu but rather Hameed Sangodele or Yekini Amoda Ogunlere or Bobo Chicago

Whatever his real name is or whatever anyone chooses to call him, at every available opportunity this creature insists on insulting President Olusegun Obasanjo and President Goodluck Jonathan accusing them of deceit, theft, incompetence, graft, corruption and all manner of atrocities.

He claims to be holier and better than them yet the truth is that he is not fit to be used as toilet paper to clean their either of their rectums.

He suffers from low self-esteem, he has no conscience and he will do anything or sell anybody for money and power.

He is a conflicted, compromised, corrupt, filthy, parasitic and sociopathic leech and a professional loafer that has sold his soul to satan and that has traded his nation, his people, his heritage, his conscience and his honor to Beelzebub in return for a few choice morsels at Buhari’s table.

The truth is that he is not fit to be Obasanjo’s or Jonathan’s houseboy let alone join issues with either of them or insult them in the way that he has been doing.

I advise him to respect himself, to seal his lips and to prepare for his retirement to Iragbiji after his candidate and master is thoroughly defeated and humiliated in saturday’s election.

I urge him to appreciate the fact that all the blood that has been shed over the last three years by the Buhari government, their security forces and their secret and covert associates and allies, including the Fulani Herdsmen, Boko Haram, ISIS West Africa and the Malian Fulanis, remains firmly on his hands and that both he and his impish little dwarf and pliant midget called Yemi Osinbajo, will be called to account and be brought to justice for the shedding of that blood.

There are principally five people that many consider to be incurable lepers and treacherous collaborators and that they hold responsible for the suffering, humiliation and deprivation of the people of the south and the Middle Belt over the last three years and six months and when the time comes we shall bring them to justice.

The first is the fraud called Bola Ahmed Tinubu who literally worships Buhari and literally prays and makes supplications to him every night .

The second is the foul-mouthed, pot-bellied creek Haramite from Rivers state called Rotimi Amaechi who has sold his own people down the river, who said that saturday’s presidential election would be “a battle and not an election” and who has threatened violence against the people of Rivers state for the sake of Buhari.

The third is the pamper-wearing and over-bloated pregnant frog from Imo state called Rochas Okorocha who once said that Buhari was the best thing that has ever happened to the Igbo since sliced bread.

The fourth is the cruel, violently aggressive, abusive, mentally-unstabe delinquent and unconciable sociopath from Kogi state called Yahaya Bello who once said “Christians are angry with Buhari only because they can no longer steal to pay tithe”.

And the fifth is the utterly shameless and spineless quisling and cowardly modern-day Uncle Tom from Plateau state called Solomon Lalong who once said that Buhari taught him “how to run” his state as governor.

These five unhinged and malevolent personalities, with Bola Tinubu acting as their leader and the proverbial “chief slave” to the vicious and ugly hegemonist tendency and feudal cabal that Buhari represents, have done much harm to the cause of the Middle Belt and the south. They have also joined hands and forces with the enemies of God and sought to undermine the Church and destroy the Christian faith.

They are nothing but minions and acolytes of the salafists and wahhabists of the core Muslim north and they are perfect examples of those that have variously and rightly been described as “useful idiots and accursed slaves”.

We shall not forget their contributions to the suffering and bondage of our people and neither shall we forget their wickedness, insensitivity and cruelty.

Permit me to share just one example of that cruelty here. One of the most notorious and egregious acts of wickedness that Tinubu has ever indulged in is the fact that he encouraged his puppet governors in Lagos state to prosecute Prophet T.B .Joshua’s SCOAN Church after the Church went through the trauma, hardship and tragedy of being bombed by a group of callous and heartless terrorists a few years earlier resulting in the death of almost 200 innocent souls, most of whom were foreigners.

Tinubu knew the facts and knew what really happened but because he hates the Church so much he sought to cover up the truth and instead joined hands with others and blame the bombing of the building on the victims, the Church itself and the man of God, alleging that the structure was not well-built and that it had a faulty foundation.

This is not only a lie from the pit of hell but also wickedness in its most graphic and unadulterated form and it has undoubtedly resulted in a deep spiritual wound on Bola Tinubu and his entire political family. I have no doubt that as a consequence of this alone God’s judgement will stalk them all the days of their lives.

Yet it does not stop there and Tinubu is not the only one that is under the judgement of the Living God. His master Buhari is as well and perhaps even more so.

In Exodus 14:4 the Holy Bible says, “I will be honored through Pharaoh and all his army and the Egyptians will know that I am the Lord”.

We are witnessing the full manifestation of this scripture unfold before our eyes today as our very own Pharaoh and his army of Egyptians are being humiliated, brought down to their knees and stripped naked before the entire world.

The Lord has hardened Pharaoh Buhari’s heart unto destruction and he and his entire brood of blood-sucking and flesh-eating demons in human skin are about to experience their “Red sea” moment.

They will meet a bitter and tragic end and the Lord’s name will be glorified. The clock is ticking and the bell tolls for them.

Just a few days ago Obasanjo said “if we expose those in Buhari’s government they will not only go to jail but they will also go to hell”. I have no doubt that this is true.

The hottest place in hell has been reserved for Buhari and his political associates who I can best describe as a congregation of incorrigible crooks and scammers and a lawless congress of sadistic and irredeemable miscreants and baboons. By God’s grace, when the time comes, they will enter into the burning flames of hell head-first.

Given the fact that their candidate faces imminent defeat and a massive disgrace in the presidential election in a few days time, they would do well to leave Obasanjo and Jonathan alone and concentrate their efforts on asking God for forgiveness for their many atrocities and redeeming themselves before the Nigerian people.

Permit me to conclude this contribution with a word to Buhari himself.

You complain that the USA is supporting in-coming President Atiku Abubakar yet in 2015 when you were their candidate you did not complain.

Things have really changed three years and six months down the line. Three years ago could you ever have imagined that you, your party National Chairman Adams Oshiomole and your Vice President Yemi Osinbajo could be booed and stoned at your own party rally in Abeokuta?

Three years and six months ago would you ever have believed that your chief slave and chief priest, Bola Ahmed Tinubu would, out of anger and frustration, throw your party flag on the floor in full glare of the television cameras and the public at the same rally?

I doubt it! Yet these things happened before your very eyes and it was all provoked and orchestrated by one of your favourite associates and political sons, Governor Ibikunle Amosun of Ogun state.

As far as I am concerned this is the doing of the Lord and it is marvellous in our sight!

The Holy Bible says “it is a fearful thing to fall into the hands of the Living God”. If you do not know and appreciate that already you soon will.

I suggest that you open your eyes Buhari, smell the coffee, throw in the towel and prepare to retire to Daura with your merciless and ruthless cabal!

Like Tinubu’s expired milk, all things have a time-limit and an expiry date and yours has finally come. The bitter truth is that it is not Obasanjo that is the expired milk which needs to be rejected, dumped and thrown away but rather it is you.

Spread the loveThese are depressing times – stemming from different END_OF_DOCUMENT_TOKEN_TO_BE_REPLACED

Previous Post Nigeria 2019: Eshu Laalu As Polling Agent By Reuben Abati
Next Post Does Sending Money to Family Members in Africa, Create A Culture of Dependency? By Edmund Zar-Zar Bargblor