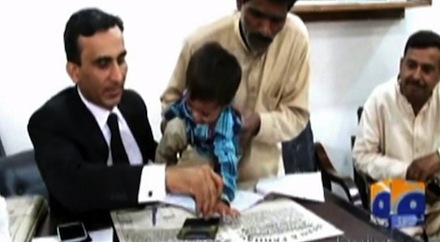 A nine-month-old baby has appeared in a Pakistan court along with other family members on charges of attempting murder, threatening police and interfering in state affairs.

Muhammad Mosa Khan who sat on his grandfather’s leg in court had his fingerprints taken before a hearing in court.

A video by WorldNews.tv showed the bewildered baby being fingerprinted, holding a bottle of milk and being carried into court by his grandfather.

A Lahore police report claimed the suspects tried to murder officers by throwing stones at them during a raid on houses who owed money for gas bills, reports in Pakistan read.

The report lodged a complaint against the whole of Muhammad Yaseen’s family, which unilaterally included nine-month-old Khan who was present in court.

“He was nominated in the FIR so I took the child to court,” his grandfather, Mr Yassen said.

Judge Rafaqat Ali granted bail to the “accused” and the case has been adjourned until 12 April, Lahore media reported.

A child under the age of seven cannot be convicted of an offence under Pakistan’s penal code. Police have since claimed they were unaware that Yaseen’s son Imran, who was among the accused, had a child.

Spread the loveThese are depressing times – stemming from different END_OF_DOCUMENT_TOKEN_TO_BE_REPLACED