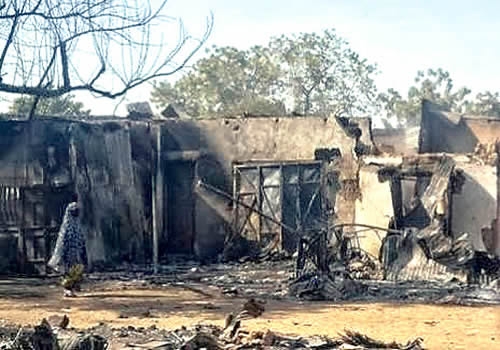 An eyewitness told Sunday Tribune that the hoodlums, numbering over 70, stormed the venue of a meeting being held by the vigilance group in the village to discuss security challenges in the area and the neighbouring states of Kaduna and Niger.

Findings gathered that in attendance were members of the vigilance group, youths and  community leaders in these concerned states.

The day, it was also said,  was the market day of the village, which made the number of people around to be on the high side.

According to a source, midway into the meeting, the armed bandits stormed the venue between 3.30 p.m and 4 p.m. and surrounded the entire building.

The source revealed that the gunmen, who reportedly came with sophisticated weapons such as Sub-Machine Guns (SMGs) and AK 47 rifles, sprayed those at the  meeting with bullets, killing about 70 people  on the spot.

They also reportedly set fire on the village before fleeing.

“We counted about 70 corpses on the ground”, the source declared, saying that other bodies were yet to be recovered from nearby bushes.

As of the time of filing the report, the Sunday Tribune investigations revealed that the corpses of some of the 70 deceased persons had been deposited at  the General Hospital, Dansadau, while others were still lying on the ground in the village.

Also, the source declared that the town had turned to a shadow of itself, as many people fled the village for safety.

When contacted, the Police Public Relations Officer (PPRO), DSP Lawal Abdullahi, confirmed the attack. However, he said that 30 people were feared dead and not 70.

He disclosed that the Police Commissioner, Alhaji Ibrahim Bichi, had deployed counter-terrorism squad to the area in order to maintain law and order.

Also, soldiers and mobile policemen were stationed at the village to secure it.

Sunday Tribune also learnt that the Assistant Commisioner of Police, Operations, the Divisional Police Officer, Karu, and other senior officers visited the village on Saturday night.

Maru Local Government is said to be the largest  local government in Zamfara State and is also reputed to be the most problematic.