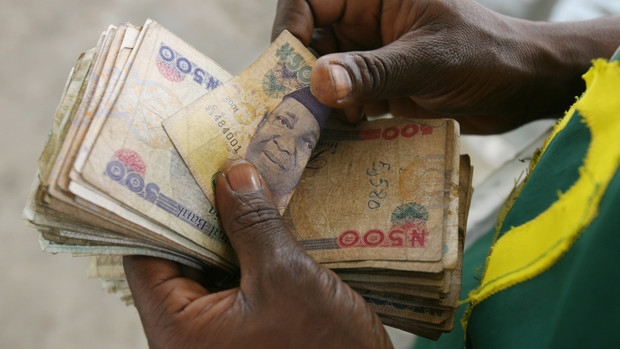 Nigeria’s currency is at risk of being devalued after President Goodluck Jonathan suspended the central bank governor last week, eroding confidence in monetary policy and sending the naira to a record low.

The naira, which rose for the first time in six days yesterday, posted its biggest five-day drop in eight months last week. The yield on Nigeria’s July 2023 dollar bond had its steepest one-day jump on record after Lamido Sanusi’s removal on Feb. 20. The security has lost 2.3 percent this year, compared with a 0.6 percent drop in the JPMorgan Chase & Co. index of African sovereign debt.

While the acting governor pledged continuity in policy on Feb. 21, saying there were no plans to devalue the currency, the central bank will have to fight to keep the naira within its targeted range of 3 percent above or below 155 at twice-weekly foreign-exchange auctions. The peg may be shifted to 170 per dollar, boosting inflationary pressures, according to Yvonne Mhango at Renaissance Capital.

“The market seems to be anticipating a devaluation,” Mhango, a sub-Saharan Africa economist at RenCap, said in a Feb. 21 phone interview from Johannesburg. “Given the loss of confidence and sentiment turning against Nigeria, I think they’re going to struggle to keep the naira at present levels.”

The suspension of Sanusi, 52, followed the governor’s calls for an investigation in December into billions of dollars in missing oil revenue. Sanusi, who was due to leave office at the end of his term in June, oversaw a drive for stability in Africa’s second-biggest economy. Sarah Alade, his deputy, was named acting governor.

Nigeria’s “economic fundamentals cannot be predicated on a single human being,” central bank spokesman Ugochukwu Okoroafor said by phone from Abuja yesterday. “The person coming to succeed Sanusi is a strong player in the industry and knows what to do on monetary policy. There is no basis nursing fears of a devaluation.”

Alade has given assurances that monetary policy won’t change, Doyin Okupe, a spokesman for Jonathan, said in a mobile-phone text message yesterday. “The initial fluctuations following the suspension have stabilized,” he said. There’s “no indication whatsoever that a devaluation of the naira will occur,” Okupe said. Sanusi could return if cleared of allegations, Jonathan said on state-owned NTA television yesterday, adding it was within his powers to remove the central bank chief.

The currency gained 0.1 percent to 164.35 per dollar by 10:34 a.m. in Lagos, strengthening for a second day after the Central Bank of Nigeria auctioned $399.7 million to lenders. It also sold dollars directly to banks, Kunle Ezun, an analyst at Ecobank Transnational Inc. in Lagos, said by phone yesterday.

The bank’s Monetary Policy Committee has kept the benchmark interest rate at a record high of 12 percent for more than two years, pushing inflation below 10 percent. Consumer-price growth climbed above 15 percent in the first half of 2010.

If the currency is devalued in July at the first MPC meeting under Godwin Emefiele, Jonathan’s nominee to replace Sanusi, consumer-price growth may climb to as high as 12 percent by year-end, Mhango said in a Feb. 21 note. At the March MPC meeting, the bank may raise its key rate by 100 basis points, she said.

Emefiele, 52, said he would comment “at the appropriate time” when contacted on his mobile phone yesterday. He’s currently chief executive officer of Zenith Bank Plc (ZENITHBA), Nigeria’s second-biggest lender. Sanusi’s surprise suspension will be the first test of the “credible macro policy” he helped establish, Fitch Ratings said in a statement yesterday.

The naira has declined in five of the past six years, dropping 2.6 percent in 2013 as the Federal Reserve announced plans to cut stimulus. It last posted an annual gain in 2012.

“Sanusi’s suspension is unequivocally negative for Nigerian assets and puts the CBN credibility at stake,” Kevin Daly, who oversees about $10.5 billion in emerging-market and Nigerian debt as a money manager at Aberdeen Asset Management in London, said in a Feb. 20 e-mail.

Sanusi’s fight with Nigerian National Petroleum Corp., which has ventures with oil companies including Royal Dutch Shell Plc, “underscores the key risk for Nigeria that has dogged the country for years, which is the transparency of oil revenues,” Daly said.

The NNPC has “been transparent and causes no risk to the nation,” spokesman Omar Farouk Ibrahim said by phone from Abuja yesterday, declining to comment on Sanusi’s suspension. “There is no fund we’re unable to account for. In this case of alleged missing fund or whatever, we’ll come out vindicated.”

Nigeria’s foreign-exchange reserves, which the central bank sells to lenders to support the naira, have dropped 16 percent from the peak in May and fell a 24th straight day to $41 billion on Feb. 21. The regulator has adequate reserves to defend the naira, the central bank’s Alade said on Feb. 14.

Yields on Nigeria’s $500 million of debt due July 2018 rose for a fourth straight day yesterday, climbing seven basis points to 5.1 percent. The security has lost 1.3 percent this year.

With the currency at risk of its third straight monthly decline, Jonathan’s move has jolted investors who are seeing politicians exert control over institutions that should be independent, said Jibrin Ibrahim, director at the Abuja-based Center for Democracy and Development.

“If I were an investor I’d be very worried,” he said by phone on Feb. 21. “When you put it in the larger context of the decline of foreign reserves and pressure on the naira, if you’re now having direct political control over the central bank, God knows where this will lead us to.”