Liberian-American Relations: Do Liberians Really Know and Comprehend the Spirit of America? 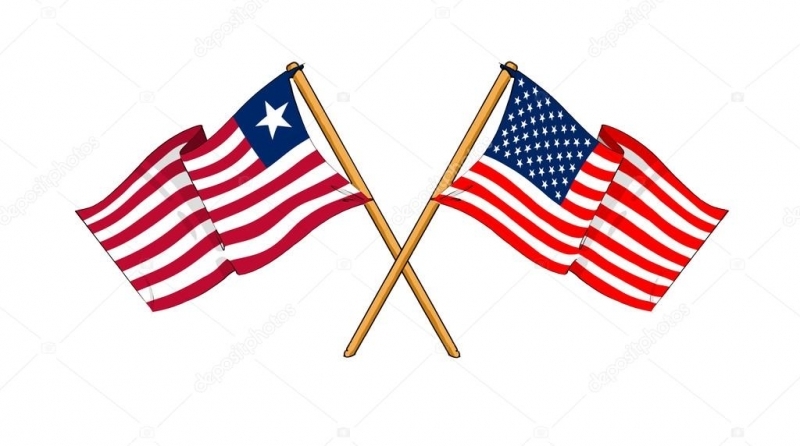 Liberia produced a Replica of America’s National Flag, but not America’s Blueprint of National Development

While there are similarities of the Liberian and the American flags, however, the Liberia that surfaced in West Africa in 1847, as a sovereign nation. Liberia unfortunately, was not a replica representation of the United States of America, it was very different, its values and visions are not congruent to the spirit of America. In fact, Liberia's founding fathers' blueprints were completely contrary to America's spirit of governance of progress, ingenuity, excellence in education, health, road development, upholding the rule of law and using governance as an opportunity to be of service to the nation.

It is interesting for a nation like Liberia who is very close in bilateral relationship with the United States, one of the most developed nations in the world; yet continues to be one of the poorest countries, baffles our mind.

Mr. Yorgo Mullenax, a realtor, said in one of his blogs, when someone asked him whether he agreed with the saying: “Show me who your friends are and I’ll tell you who you are?” He responded in affirmatively: “your current friends are a reflection of you, and are 100% your choice. The people you choose to be around shape your personality, the way you think, the way you speak, and the way you perceive the world.”

Ms. Christine Convey in her article entitled: Lives of Settlers in the American Colonization Society Experiment pointed out that Americans naively expected that Liberia would fulfill the dreams of all involved; that repatriates would create a black unified version of Republican America, reinforcing the racial order and proving that colonialism could work – that it would become a civilized reflection of America in Africa.  But, the Liberia that surfaced in West Africa in 1847, as a sovereign nation, is not a replica representation of the United States of America, it was very different, its values and visions are not congruent to the spirit of America. In fact, Liberia’s founding fathers’ blueprints were completely contrary to America’s spirit of governance of progress, ingenuity, excellence in education, health, road development, upholding the rule of law and using governance as an opportunity to be of service to the nation.

It is interesting for a nation like Liberia who is very close in bilateral relationship with the United States, one of the most developed nations in the world; yet continues to be one of the poorest countries, baffles my mind. In fact, over the years, most Africans perceived and called Liberia as ‘Petit- American’. Dr. Nancee Oku Bright said it best when she wrote and produced a Liberian Documentary Film. Dr. Bright is a Liberian writer and Firm Producer and Director based in New York. She is best remembered for the short documentary film: Liberia: America’s Stepchild, which premiered on PBS in 2002. It is the sixth offering of World Story and ongoing series of specials on PBS. The film echoed the series of ‘parallel stories of America’s relationship with Liberia, the settlers’ relationship with the indigenous people and explores the causes leading to the Liberian civil war.’

Even, Dr. Edward Wilmot Blyden said in one of his speeches: “What are the moral causes of the present evils in Liberia? As a people, we have been in too much haste to be rich. Relinquishing the pursuit of those attributes that would fit us for the faithful discharge of our peculiar duties as men, as Liberians, as an infant nation, we have used every possible measure to enhance our pecuniary importance; and in the precipitate efforts at wealth, we have not been careful as to what means we have employed. The desire to be rich, or to appear to be rich, pervades all classes. The love of money… has grown upon us to such a degree that all other avenues of distinction seem but trifling in comparison of those which lead to the acquisition of money. To be rich seems with many ‘the chief end of man.’ Hence, no talents, no endowment of the mind, no skill or knowledge, no amount of education, is appreciated only so far as it will pay…. This fact has operated greatly in retarding the literary progress of our youth…” (On July 27, 1857, he was Liberia’s Independence Day Guest Speaker in Monrovia. He spoke on the following topic: Liberia As She Is; And the Present Duty of Her Citizens).

Yes, indeed sadly, Liberia is like an old taxi, with different drivers, but obtaining the same result, ‘growth without development.’

In previous listed articles, I alluded that the first leaders such as Joseph Jenkins Roberts, Stephen Allen Benson, etc., were individuals whose mindsets were rooted in the act of domestic servitude and not in the act of politics. They were not prepared intellectually and politically to set up a wholesome functioning political institution. They viewed politics from a narrow perspective that was not inclusive. Because of this mindset, they proceeded to set up a government that created a line of demarcation between itself and the indigenous Africans. The indigenes were never a part of the political arrangement; they became integrated into the political realm after many decades. In fact, indigenous Liberians became integrated into the political realm around 1940, 93 years after the declaration of independence in 1847.

The recent newspapers’ reports detailing widespread alleged malpractice at the regulator in a currency scandal has undoubtedly gripped the Liberian nation. Subsequently, announcement of the arrest of one of the sons of Liberia’s former president Ellen Johnson Sirleaf, alone with two central bank officials on Thursday, February 28, 2019, is embarrassing and a disappointment.  After 14 years of civil war and over the deaths of over 150,000 people,  and millions of US dollars  spent by the  international

community as  aid to Liberia and for some Liberians to perpetuate alleged “financial malpractices”, especially during this particular time of financial difficulties  in the nation, is most unfortunate  (https://www.reuters.com/article/us-liberia-money/liberian-central-bankers-arrested-after-probe-into-missing-millions idUSKCN1QH2RO).

This brings me to suggest a practical and simple example of governance and accountability for our leaders to follow.

The Y Scouts Firm outlined Ten Ethical Leadership Characteristics that are in line with America’s Spirit of Governance. As Liberians, we need to integrate these attributes in the formation of the governance of the Liberian Nation.

“It goes without saying that anyone who is ethical will also be honest and loyal. Honesty is particularly important to be an effective ethical leader, because followers trust honest and dependable leaders. Ethical leaders convey facts transparently, no

matter how unpopular they may be.”

“Ethical leadership is not just about talking the talk; this type of leader also walks the walk. The high expectations that an ethical leader has of employees are also applicable on the individual level. Leaders expect others to do the right thing by leading from example.”

What I admired about the spirit of America is her spirit of Volunteerism. This means, people helping people through privately initiated, rather than government-sponsored, agencies.  American Volunteers are highly motivated people; workers organized themselves and others to solve a particular – be it community problem or meet an immediate social need rather than wait for someone else or for the government to do it. Volunteerism reflects Americans’ optimistic pride in their ability to work out practical solutions themselves.

The spirit of America was captured by the words of President John F. Kennedy’s Inaugural Address on January 20, 1961.

“In the long history of the world, only a few generations have been granted the role of defending freedom in its hour of maximum danger. I do not shrink from this responsibility–I welcome it. I do not believe that any of us would exchange places with any other people or any other generation. The energy, the faith, the devotion which we bring to this

endeavor will light our country and all who serve it–and the glow from that fire can truly light the world.

Although, Liberians have been in contact with Americans for a very long time, we have learnt nothing from the Americans in the area of financial transparency. As a saying goes “Show me who your friends are and I’ll tell you who you are”; those positive attributes of America, especially in governance, the nation has done nothing to integrate some of these policies to help  us moveforward economically. Mr. Yorgo Mullenax, a Realtor, as I reflected above said: “your current friends are a reflection of you, and are 100% your choice.  The people you choose to be around shape your personality, the way you think, the way you speak, and the way you perceive the world.” He added, “Whether we are aware of it or not, the people we choose to pay attention to and consider friends frame our reality. They are a barometer of what is normal, what is possible.”

Fellow Liberians, do we really know and comprehend the spirit of America?  In my view, the governance of a nation is both physical and spiritual. It is the caring attribute of governance that brings about the greatness of a nation, not selfishness, greed, or corruptions.

Spread the love
Oye Gureje: A Scholar As A Rhotacist, By Remi OyeyemiSpread END_OF_DOCUMENT_TOKEN_TO_BE_REPLACED
Previous Post Lagos, the Centre of Excellence, has been held captive and brazenly been manipulated – Comrade Mark Adebayo
Next Post Nigeria 2019: Eshu Laalu As Polling Agent By Reuben Abati