Is the Roman Catholic Church in Liberia Under Siege? By Edmund Zar-Zar Bargblor 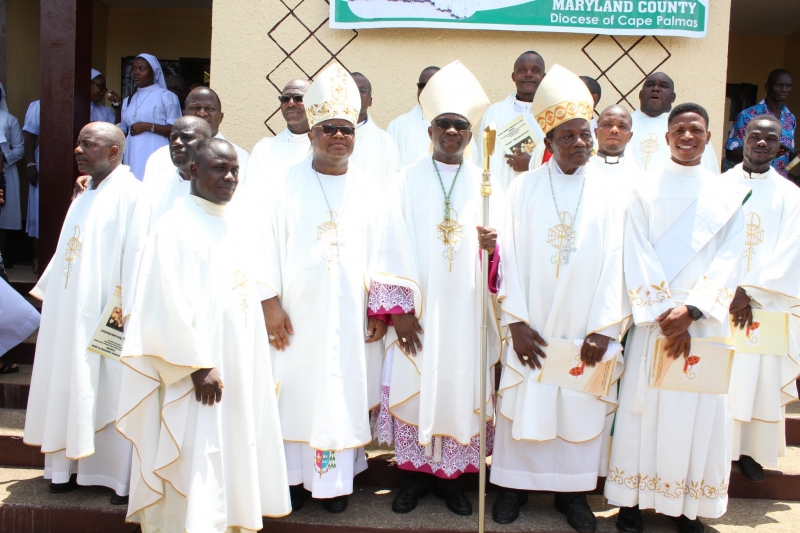 The recent news about the allegations of ‘sex–based assault and power abuse’ inside the Catholic Church has continued to vibrate within the various Liberian Catholics in the diaspora, especially in the United States.  It is interesting that these allegations include the two top personalities of the church, namely Archbishop Lewis Zeigler and Bishop Andrew Karnley of Cape Palmas. The timely publication of these allegations, have aired suspicion. These allegations come at the time when Archbishop Zeigler is contemplating retirement and there is a prevailing perceptionthat the Bishop of Cape Palmas, Bishop Andrew Karnley, might probably succeed him. One wonders whether what is taking place is about the Liberian Church’s politics and may have nothing to do with ‘sex–based assault’ as alleged by Ex–Rev. Father Gabriel Sawyer. I hope this is not the case! However, whatever the case may be, God has a way of bringing out the truth.

In the United States, the issue of child sexual abuse by Roman Catholic priests was first publicized in 1985 when a Louisiana priest pleaded guilty to 11 counts of molestation of boys. It was again brought to national attention when a number of books on the topic were published in the 1990s, and again in 2002 following a series of publications by the Boston Globe (“Pedophile ex-priest Gauthe out of Texas jail”).

There is a famous poem entitled: 'Children Learn What They Live.' One of its lines reads: "If a child lives with shame, he learns to feel guilty." Observational learning theory informs us that man can learn certain behaviors merely by watching someone else perform them. What others do, especially events reported in the news, have a great influence on those that they see; particularly American news, media, and its influence around the world. It seems that some of these news’ have left lasting thought on most of the minds of African readers, especially when it comes to sensitive

issue such as molestation of boys by a Roman Catholic priest.

In this book one of the customer reviewers wrote: “How many people, including faithful Catholics, are aware that priests are denied the right to review their own personnel files, denied the right to confront their accuser, denied the right to defend themselves basic constitutional rights that the rest of us enjoy? Falsely accused priests have their lives completely ruined, their vocations—their livelihood unjustly taken from them, their reputations destroyed by greedy lawyers like Jeff Anderson & Co. & the "victims" who view the Catholic Church as their own bankroll. Innocent Catholic parishioners are watching their parishes being sold to pay the "victims" of these false accusations. The bishops do not fulfill their canonical obligations to their own priests because they are very willing to sacrifice innocent priests to save their own hides. “The Church hierarchy is in terrible need of a purging. Maybe this book can help” (https://www.amazon.com/gp/customer–reviews/)

I met Archbishop Jerome Zeigler in Bong Mines around 1979 and 1980, at the time he was merely a priest and I was a

young college graduate from Cuttington University College, now Cuttington University. At the time, I was assigned as Chairman of the Mathematics Department at the Bong Town High School, Bong Mines. I was also conductor of the Choir, Bong Mines Catholic Parish and Rev. Father Zeigler would visit Rev. Father Collins, the assigned Parish Priest in Bong Mines from time to time. I viewed him to be humbled and at times very shy. I had a great respect for him; I realized that he lives a simple life and an air of deep spirituality around him. I never noticed or observed that he had feelings that would undermine the attributes of the life and vow of Celibacy.

About four years ago, I met Bishop Andrew Jagaye Karnley for the first time when he visited Rhode Island; he was a priest at the time. In 2018, he visited the Holy Name Parish in Providence, Rhode Island (USA), where he conducted the Sacrament of Confirmation in his position as bishop. Most of the time when he visits Rhode Island, I along with some members of the Knights of Columbus (Council #73),  usually visit the rectory, where he resides.  And due to his deportment, most parishes invite him to conduct holy mass.  He is professional, disciplined, and projects an air of deep spirituality.  Neither I, nor the members of the Knights of Columbus ever observed any behavior contrary to the vow he upholds as a priest and currently as bishop.

Most Liberians who encountered with Bishop Karnley shared the fellow sentiments as reflected in the latest frontpageafricanline.com concerning this same issue under discussion. One Solo Otto Gaye said: “I think it is misinformation. This is hard to believe because Bishop is an African man from the village with me. We even sleep together [on the same bed]. If he is gay, I would know”               (https://frontpageafricaonline.com/news/liberia–catholic–church–scrambles–to–cover–up–sex–abuse–scandal/).

I am not oblivious, when it comes to the issue of priest’s sexual allegations, especially in the United States. So, this topic is not new. However, these allegations have yet to be proven or verified. Since this is a traumatic experience, I wondered if Fr. Gabriel Sawyer sought help in counseling as the result of his various encounters with these bishops. If so, it will help his case identify the counseling treatment center or centers he attend; either in Liberia or in any other countries in Africa.

For example, adult survivors of child sexual abuse do face many challenges; these centers could have helped him in the recovery process. Therapy is very essential for anyone who experienced this unfortunate episode.  “Perhaps, the influence of the negative press in the United States and in other western nations,  relevant to the  ‘mounting sex abuse scandal, Father Sawyer, perhaps,  decided to use alleged sex abuse scandal/allegation as a justification to carry out his plans.  On the basis ‘of such allegations, he decided to frame a story accusing the Archbishop of Monrovia, Lewis Ziegler, his immediate boss, of planning sexual attacks against him’(globeafrique.com).

The New Yorker, author Junot Diaz wrote for the first time about being raped as a child by a grown–up whom he trusted, and how it continued to affect him throughout his life, especially when it came to forming romantic relationships. He explained how he encountered difficulties forming a successful romantic relationship…(https://www.thecut.com/2018/04/men–on–dating–after–being–sexually–abused.html)

Most Liberian Catholics in the diaspora are not surprised when the Globe Afrique newsorgan, reported that “preliminary investigation, the alleged accuser or victim, Father Gabriel Sawyer, had been involved in a romantic relationship with a young Liberian female who he supported midway throughout her undergraduate education and eventually medical school. During that period, the preliminary investigation revealed that Father Sawyer allegedly sought pastoral appointments to Catholic parishes in the Liberian capital, Monrovia.  Not pleased with his request, mismanagement, lack of financial accountability and suspected lifestyle, the Archbishop refused to assign him to such parishes in Monrovia. Moreover, the preliminary investigation also revealed that Father Sawyer had promised his female lover with whom he was deeply and openly involved that as soon as she completed her medical degree from the A.M Dogliotti College of Health & Life Science – University of Liberia, and they married, they would relocate to the United States and seek residency” (https://globeafrique.com/liberias–catholic–church–sex–abuse–the–real–story–globe–afriques–ongoing–probe/).

Interestingly, former Father Gabriel Sawyer has yet to refute the above allegations since Globe Afrique newsorgan reported.

It seems from all indications, former Rev. Father Gabriel Sawyer was too quick to engage in a romantic relationship with a Liberian female after leaving the priesthood. It could only be possible he was maintaining a romantic relationship while he was still in the priesthood. If this was the situation, he undoubtedly violated the Priesthood Holy Vow of Celibacy.  Also, these  allegations, as I pointed out in the first paragraph of this article, come at the time when

Archbishop Zeigler is contemplating retirement and there is a prevailing perception that the Bishop of Cape Palmas, Bishop Andrew Karnley might probably succeed him.

In some quarters in Monrovia, it is believed, former Rev. Father Sawyer created these allegations against the bishops, as an opportunity and excuse to leave the priesthood. Secondly, one wonders, whether what is taking place is about the ‘politics of the Liberian Church’ and had nothing to do with ‘sex–based assault’ as alleged.

More importantly, the excuse he gave for getting married doesn’t make sense.  “I had to get married to protect my own life. Once the information got out they were sending me threatening messages. I am the first person to speak out on these homosexuality and sex abuse charges. And these things have haunted the church for years. I felt it is time someone speaks out about them.” (FPA May 20, 2019)

Indeed, Napoleon Hill was correct when he said: “Before us, lie two paths, honesty and dishonesty.  The shortsighted embark on the dishonest path; the wise, on the honest. For the wise know the truth; in helping others, we help ourselves, and in hurting others we hurt ourselves. Character overshadows money, and thrust rises above fame. Honesty is still the best policy. And Martin Luther King Jr.  said:  “We shall overcome because Carlisle is right. “No lie can live forever.”

Indeed, the Roman Catholic Church in the Republic of Liberia is undoubtedly under siege!

Mr. Edmund Zar–Zar Bargblor is an Educator. He is a graduate of Cuttington University, Liberia; Howard University, Washington, D.C, and Israel Institute of Technology, Haifa, Israel. He is a former Deputy Managing Director of the National Port Authority of Liberia, NPA, and former Chairman of the Department of Mathematics, Bong Town High School, Bong Mines, Liberia; Instructor of Mathematics, Providence School Department, Rhode Island, USA. He can be reached at [email protected].com. Also, he is on Twitter and one of the administrators of The African Intellectual Forum on Facebook: https://www.facebook.com/groups/Africanintellectualforum/).

Spread the loveAs the nations of the world endeavor to END_OF_DOCUMENT_TOKEN_TO_BE_REPLACED

Previous Post Does Sending Money to Family Members in Africa, Create A Culture of Dependency? By Edmund Zar-Zar Bargblor
Next Post The Speech Buhari Didn’t Make By Reuben Abati