I MAY LEAD ADAMAWA OUT OF NIGERIA – LAMIDO OF ADAMAWA 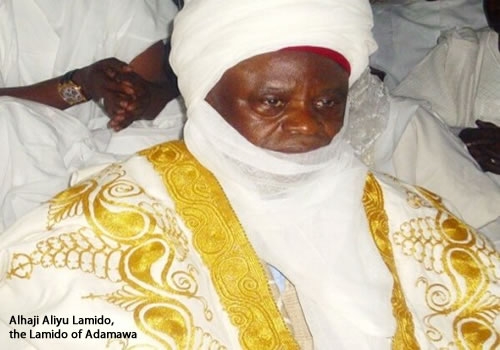 A delegate and the Lamido of Adamawa, Alhaji Aliyu Lamido has threatened to stage a boycott of the conference by his people.
This is just as a 49-member body, on Wednesday, met behind closed doors with the chairman of the national conference, Judtice Idris Kutigi, in his frantic bid to break the stalemate over the voting pattern to be adopted at the conference.

The Lamido hinged the threat on what he perceived as moves to impose  a practice, ostensibly the two-thirds simple majority  of  the “so-called Western world” on the country through the conference.

He accused some “so-called elder statesmen’ and close allies of the president of the country of being the mastermind of the plot.
“I want to sound a note of warning. My warning is that we should not take a cue from the so-called Western world because they are always protecting their selfish  interest.

“When the president came to inaugurate this conference, he delivered an address and in that address, he specified what he wanted us to do and what he advised us not to do. In the address, he specifically mentioned that pattern of vote {would be} either by consensus or 75 per cent.

“It is there in the speech and the so-called elder statesmen, who can lay down their lives for the interest of the president, are the same people who are contradicting the president at this conference, introducing something which the president didn’t say in his address, that is the two-thirds majority.

“So, this is why I said I should make this statement to make people to understand. They call themselves Jonathan’s loyalists. Aren’t they?”

He said while he had a country like Cameroun, where he claimed his kingdom came from, to run to if Nigeria should break up, the people from other sections of the country, allegedly orchestrating trouble, had none to seek refuge.

He said: “Many of them have been shouting their heads off in the media. My kingdom has been in existence hundreds of years before the so-called entity Nigeria and the so-called civilised people from the West were the people who came and divided us and the larger part of my kingdom is there in Cameroun. It is called Adamawa State in Cameroun. If you go to Cameroun, you can verify this.”
The traditional ruler, whose speech was interjected with a show of disapproval by many delegates, apparently did not honour the intervention of Justice Kutigi that he should concentrate on his contribution to the issue of the conference.

He added: “You contradicted what the president said. With the way we are going, if we are not careful, this conference will flop and if the country disintegrates, and may God forbid, many of those shouting their heads off will have nowhere to go, unlike we in Adamawa; our kingdom transcends Nigeria and covers Cameroun.

“There is Adamawa State in Cameroun. If I run to that place, I will be quickly assimilated. So,  I appeal that  we follow the pattern laid down by the president, because if we are pushed to the wall, we will stage a walkout of the conference. Every one is a potential jingo. It is not the monopoly of any individual.”

But in his own contribution to the debate, another delegate, Dr Bello Muhammed from Kebbi State, opposed the proposal for members of the public to send memoranda, saying many did so when the Okurounmu Committeee held zonal siitings across the country.

However, Dr Kunle Olajide backed the proposal. He said: “I do not agree with him [Dr Muhmmed]. Those memoranda at that time were tailored towards the modalities for organising the conference. Nigerians are all here wanting to know what goes on here. Let them send their memoranda and we need to know what the people want and our objective is to build a society where egalitarian reigns.”

Meanwhile, the 49-member body, on Wednesday, met behind closed doors with the chairman of the national conference, Judtice Idris Kutigi, in his frantic bid to break the stalemate over the voting pattern to be adopted at the conference.

The meeting commenced  after justice Kutigi adjourned the first session of the day at about 10.48 until 2.15 p.m. when they leaders came out for lunch.
Details of their discussion, which was the sharp division among the delegates on whether it should adopt consensus or the two-thirds majority during voting, remained sketchy.
The deputy chairman of the conference, Professor Bolaji Akinyemi, had announced the names of the delegates after the house resolved to call for memoranda from members of the public on matters that should be included in the agenda of the conference.
A simultaneous demand from the other delegates trailed the announcement of the names by Akinyemi on the primary purpose of the meeting.
He explained that it was meant to find a possible compromise to the logjam over the voting pattern at the conference.
The names are, among ohters, General Ike Nwachukwu, Chief Mike Ahamba,  Chief Olu Falae, Dr Kunle Olajide, Chief Peter Odili, Chief Edwin Clark, Prof. Jubril Aminu, Professor Ibrahim Gambari, Professor Jerry Gana, Alhaji Adamu Waziri, Mallam Tanko Yakassai, Senator Ibrahim Idah andGeneral A. B Mamman.

Spread the love  “Life’s most persistent and urgent question is, END_OF_DOCUMENT_TOKEN_TO_BE_REPLACED

Previous Post BEING TEXT OF PRESS BRIEFING CONDUCTED BY OGUN WEST REBIRTH ON SOME BURNING ISSUES OF URGENT IMPORTANCE.
Next Post x-Magistrate beheaded by domestic aide