Fiorina is too mad to see straight By Eugene Robinson 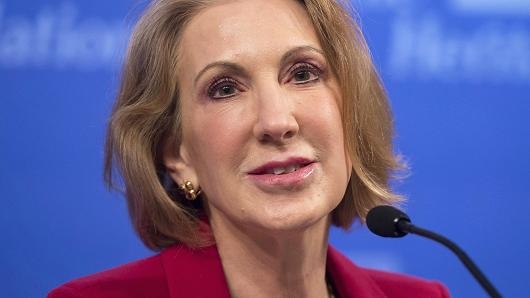 WASHINGTON • How angry is Carly Fiorina? So angry she can't see straight. That's the only explanation for the yawning gulf between what she says and the plainly visible facts.

Fiorina stands out among the Republican presidential candidates not just because she is a woman but also because she has adopted a strategy of breathing fire. She presents herself as mad about everything, and she never gives an inch on anything she says, no matter how demonstrably untrue. Unhappily for our democracy, this approach has vaulted her into the upper tier of the multitudinous GOP field.

Front-runner Donald Trump is also full of bluff and bluster, but there's a difference. Trump makes grand, sweeping statements with no basis in fact, but they cannot empirically be shown to be false. To cite one example, I don't for a minute believe the ridiculous claim that the government of Mexico is deliberately sending criminals across the border. But how can anyone prove the negative?

Fiorina, however, is all about specificity. During the debate earlier this month, she created an electric moment when she went after Planned Parenthood. Glaring into the camera, she challenged Democrats to view the sting videos taken by anti-abortion activists and "watch a fully formed fetus on the table, its heart beating, its legs kicking, while someone says we have to keep it alive to harvest its brain."

One problem: No such video exists. To be precise, I should say that no one has been able to find such footage and Fiorina refuses to produce it.

There does exist a video in which a woman claims to have witnessed such a scene. But there is no corroboration, and the accompanying images show nothing of the kind. Rather, they include footage of intact fetuses and, in one instance, a stillborn baby.

But when pressed recently by Fox News host Chris Wallace to acknowledge that the video she so vividly described does not exist, Fiorina refused. And when challenged on the point Sunday by NBC's Chuck Todd, Fiorina repeated the apparent lie — that's the only word for it — and threw in a couple more.

"That scene absolutely does exist," she said. When Todd pointed out that the anti-abortion activists who made the videos admit that what Fiorina saw was stock footage, she ignored him: "Chuck, Chuck, Chuck, Chuck, Chuck. Do you think this is not happening?"

She then claimed that "taxpayers are paying for" the alleged butchery — which is not true because the use of federal funds to pay for abortion has been banned for nearly four decades. And she falsely maintained that the Democratic Party's policy is that "it is not a life until it leaves the hospital."

I try not to question the sincerity of anyone's views on abortion. But however passionate Fiorina's convictions may be, she doesn't get to make stuff up.

The salient facts, most business analysts agree, are these: Fiorina made a huge strategic error by leading HP, a struggling computer hardware company, to acquire Compaq, another struggling computer hardware company. She laid off about 30,000 workers. She talked about "right-shoring" jobs to overseas locations, though now she denies any such loss of U.S. jobs took place. The stock price — the measure by which Wall Street measures CEO performance — fell by more than 50 percent during her tenure. It jumped nearly 7 percent the day she was fired.

Fiorina says she will run on her record "all day long." But what she's really running on is her anger: About Planned Parenthood, of course. About the Iranian nuclear deal, which she promises to undermine. About Russian President Vladimir Putin, with whom she says she will not speak. About President Obama.

Is she really, truly so filled with rage? Probably not. When she ran unsuccessfully against Sen. Barbara Boxer, D-Calif., in 2010, she was a moderate, pro-business Republican. That erstwhile profile would get her nowhere in this year's presidential race, however, when everyone is scrambling to get to the right of everyone else and "moderate" is a dirty word.

One has to wonder if the showy posture of ultraconservative anger isn't the biggest lie of all.

Spread the loveOf all the updates that have been given END_OF_DOCUMENT_TOKEN_TO_BE_REPLACED