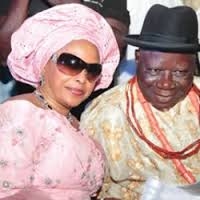 Dr. Bisola Clark, wife of elder-statesman, Senator Edwin Clark, yesterday, accused former President, Olusegun Obasanjo and daughter, Iyabo for having no single love for Nigerians, going by the incident that led to the death of her two children during the reign of the former President.

The children and their mother were with Iyabo and were on a rendezvous with the president to celebrate the victory won over the then All Nigeria Peoples Party’s candidate, Muhammad Buhari.

Mrs. Clark who was not married to Senator Clark at the time of the death of her two children, aged 10 and 14, said she was moved to open up after ten years when Iyabo in her letter to her father cited the incidence as a traumatic experience that eventually spurred her into public service.

A visibly embittered Mrs. Clark wrote, “Her actions and inactions since then would seem to indicate that she never truly appreciated the gravity of what happened that day.

Iyabo, in the said letter made copious references to an incident which has remained etched in my memory over this period of 10 years since my two children, one aged 10 (Adeife) and the other aged 14 (Akinola) were brutally murdered by gun men in Iyabo Obasanjo’s car as we drove from their ancestral village, Igbogun, several kilometres before Ifo in Ogun State.

“At some point in the journey, Miss Iyabo Obasanjo had suggested that my children should join her car with her police orderly and an elderly member of Iyabo’s family who was travelling with her on that day and her driver, while Iyabo and I drove in the car of my friend who voluntarily came to pick me up to go to Igbogun, because my driver failed to show up on that day.

”The summary of this story is that my two children along with three other occupants of that car were brutally murdered on that nightmarish day.

“I had kept quiet about this incident for all these years but when I read Iyabo’s letter to her father, in which she alluded to the incident, I felt that the time had come for me to break my silence for the sake of posterity.

”On that fateful day, my two children’s lives were taken instead of Iyabo Obasanjo who was the daughter of a sitting President at the time.
Up till now, justice is yet to be served, ten years after the incident.

”At the inauguration of the foundation which I established in memory of the children, I recall that no single member of President Obasanjo’s family, not even Iyabo, in whose place my children died, attended the launch of the foundation.

”This was even though the former President had through his Chief of Staff Gen Abdullahi promised to be present at the event.
“In the end, Gen. Obasanjo sent his then Minister of State for Women’s Affairs (Miss Funke Adedoyin). I also vividly recall my mother sorrowfully remarking that the Obasanjos had reduced the death of her grandchildren to a ‘women’s affair’ issue.

”The theme of setting up the foundation was to immortalize the names of Adeife and Akinola, but painfully, Gen. Obasanjo and Iyabo never got involved. Quite sadly, they never did anything in this regard and never took part in any of the various activities we organized at that point in time or since then.

Responding to the assertion, Senator Obasanjo said, “There is no way to compensate Mrs Bisola Clark for the death of her two children. It is impossible to compensate for the loss of a child albeit two.

“The impression I was given was that it was for huge donors to give money and I didn’t have that kind of money to give. The foundation was a family foundation and my interference in its handling was not appreciated which I understood.

“I referred to the incident in my letter because I was and is still a very traumatic incident for me. I am not trying to belittle her pain, which I can not even claim to be able to fully understand.
No one has ever told me the motive of the killers but of course I am well aware that if I was in my car that day I will not be alive today. In the history of our country so many senseless deaths have occurred.

“I do believe we need, as a country, to consider this in our actions in trying to make these kinds of loss of life a thing of the past.

“The death of those two wonderful children was one of the reasons I accepted the job to come back to Nigeria and serve in some capacity first in the cabinet of Gbenga Daniel for four years, then as Senator.

“I was living in the US without any plans of moving back to Nigeria when the incidence occurred. My belief was and is that the only way to make this right is to make sure we create a country where such random acts of violence don’t occur and that we work to develop the country.

”I failed in my attempt at that but I am still hopeful that at some point, the insecurity of life of the average Nigerian as it is today will be a thing of the past and we will create a country with adequate education and training for the youth to prevent them falling into mischief and a fair and just criminal justice system that punishes offenders, to deter.

“Dr. Clark and I were not even friends and who knows if we could have been without the incidence. It is now a mute point, that I went on with my life and she went with hers is not strange. We could not force a friendship where there was none.

”Whether the gunmen intended to kill me or were just after the car as some have alluded to (this would be a strange way to steal a car, by putting 50 bullet holes in it) I have resolved will never be known. I don’t know what Mrs Clark will want me to do for her.

”If there is a way to not have those children or anyone else in the car that day, I would go back through time and do it or just even sit in my own car. I was happy to see a picture of her getting married recently on the internet and I wish her the best life can offer.”

Spread the love  “Life’s most persistent and urgent question is, END_OF_DOCUMENT_TOKEN_TO_BE_REPLACED