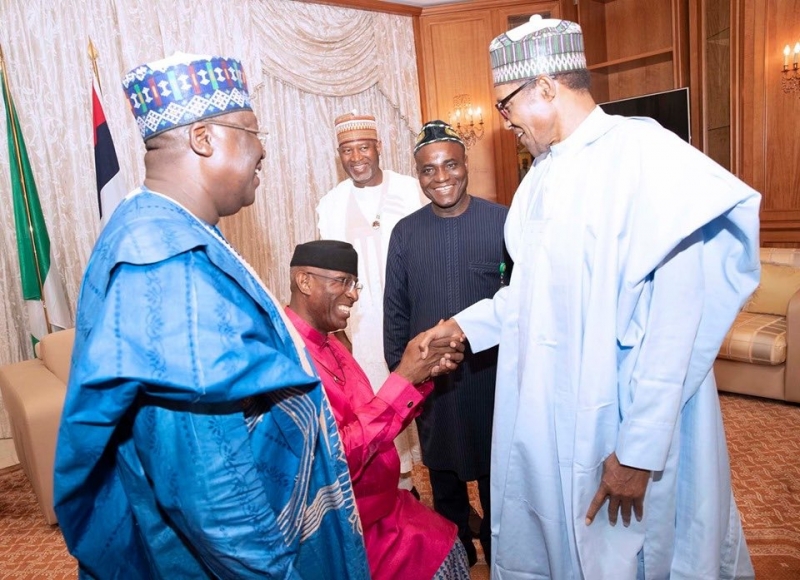 President Buhari’s anti-drug czar is probably on drugs, economic with truth or playing to the gallery. I want to suggest that a new inventory of seized drugs at the NDLEA warehouses be taken to ensure he is not getting them free. There is no doubt about the fact that the Chair is internally fighting one of the ailments above. If not, how on earth will any Nigerian who is not suffering from any of the above descend low to ascribe the killings of Christians by the herdsmen to drugs. It is the craziest response to date.

It is a known fact that he wants to ensure his job is secure but let me be frank with you, as long as you are a Fulani and hail from the northern part of Nigeria, your job is secure. We are in the final phase of Fulanization and Islamization of the nations that make up Nigeria and Buhari needs as many liars as possible to ensure this come to pass. Those who know how the Bokoharamic Buhari operates are not unaware of the fact that the NDLEA Chair was speaking to cover the tracks of his boss.

To confirm the fact that this government is sponsoring the Boko Haram men  that are masquerading as herdsmen with AK47, let us take a look at Benue state where 680,000 people were displaced and property worth over N400bn destroyed by suspected Fulani herdsmen. According to Governor Samuel Ortom of Benue state, the passage of the open grazing prohibition and ranches establishment law in the state led to the frosty relationship between him and Buhari.

According to the governor, “those who think that the problem of herdsmen is only that of the Benue

Valley and Middle Belt states should watch out. At first, it was Plateau State and southern Kaduna, then Taraba, Adamawa, Niger,  Kogi, Nasarawa, Delta, Cross River, Ekiti, Ebonyi, Enugu, Zamfara, Katsina, Rivers, Ogun, Ondo and other states. It is spreading and soon it will become an obvious national social and economic problem too difficult to contain.” Within 12 months, no fewer than four commissioners of police were posted to the state.  Some spent less than two months before they were replaced. The motive was obviously to shop for  a commissioner of police  that would bend the rules in favor of  the herdsmen against poor farmers. “In January 2018, one of the police commissioners who was apparently on a special mission to the state, supervised the illegal impeachment move against me by eight out of  30  members of state House of  Assembly a  few days after he assumed duties.” Again, in 2018, there was a circular by the police high command transferring all my police aides to other states. Though the order was later rescinded, I found it strange and unacceptable.  It was impunity taken to new heights.”.

With facts above from the chief executive of a state, one can infer that NDLEA’ chief whose village is 'high' (based on warehouse of drugs recently discovered in his village), may be suffering from an alloy of those ailments. He however insulted our collective psyche.

The balkanization of Nigeria is the transit agenda for the internal colonization which will culminate to Fulanization/ Islamization , the ultimate Goal.

T .Y Danjuma is not a frivolous person. He rarely talks. However, he could not remain taciturn on this thorny issue of the backdoor Islamization of Nigeria through the herdsmen. Read him below:“You must rise to protect yourselves from these people, if you depend on the Arm Forces to protect you, you will all die” “This ethnic cleansing  must stop in Taraba, and it must stop in Nigeria. These killers have been protected by the military, they cover them and you must be watchful to guide and protect yourselves because you have no any other place to go” “The ethnic cleansing must stop now otherwise Somalia will be a child's play.” “I ask all of you to be on your alert and defend your country, defend your state”-Danjuma

I wrote extensively about the open grazing law. Buhari is out to overrun Nigeria under the pretext of the open grazing. The day the law is passed, the very day we should celebrate the death of the comatose Nigeria because those of us who are in the know will not stand idle and watch our churches raze down by herdsmen. I call on Niger Delta, OPC and Biafra people to join forces. Do not allow anyone to divide and rule you.  I want you to imagine a company of Python, cobra, mambas. Who will dare approach  such a company with stick in hand? Do not let anyone divide you. It is time for you to come together. We can approach the UN and let them know that we are tired of the unfortunate marriage. The world has changed, we do not have to die for freedom. We can use the method that we used in the fight against Abacha for the war at hand. There is a war going on in Nigeria and no one should be deceived.

Omo-Agege, his Demi-God and Grazing law

Immediately the Senate was sworn in, the leadership ran to meet the Boko Haram Founder and financier, Buhari. The import of this visit is not lost on those who know what is going on in Nigeria. Omo-Agege went on his knee for the all-conqueror Buhari. The deputy Senate President of Nigeria was on his knees to meet his god who created him. He was on both knees to shake hand with the

The choice of Omo-Agege, a man with no credibility is very instructive. All they need to tell him is ‘remember the chicken’ and he will ‘chicken’ out. In international diplomacy, it is called blackmail. Blackmail is all Buhari needs to deal with 'always high' Omo-Agege or Omo-Bariga.  Omo-Agege has tons of  baggage and he is persona non grata to this government ,according to what we are hearing. Omo-Agege is like Agege bread to this government. Omo-Agege’ mission is well defined and has been cut out for him. They want one of our own and they just have one on his knees which is less expensive than one on his feet

Settlement program as proposed by Buhari is the legalization of the Boko Haram through the back door. Like former Ekiti state governor, Fayose, we should arm our militias. Any attempt to allow the farm settlement in middle belt, South East or South West will be resisted. We are ready to go the extra-mile. We are ready for war. The Ruga settlement is designed to evenly spread the  Boko Haram men from Sambisa forest to your backyard. No one should look at this action from presidency as parapraxis.  The last speaker of Ruga language died in 2000s . Therefore, we pronounce Ruga settlement dead before arrival.

The rules of engagement have changed over time. We do not have to fight like Biafra did in 1967. However, if we have to so, it will be hydra-headed and no one will have monopoly of the supplies of weapons from USA, UK or Russia.

"It is not the critic who counts; not the man who points out how the strong man stumbles, or where the doer of deeds could have done them better. The credit belongs to the man who is actually in the arena, whose face is marred by dust and sweat and blood; who strives valiantly; who errs, who comes short again and again, because there is no effort without error and shortcoming; but who does actually strive to do the deeds; who knows great enthusiasms, the great devotions; who spends himself in a worthy cause; who at the best knows in the end the triumph of high achievement, and who at the worst, if he fails, at least fails while daring greatly, so that his place shall never be with those cold and timid souls who neither know victory nor defeat." -Roosevelts

In this war against those who are teaming up to destroy us, where will you be counted?

The only thing necessary for the triumph of evil is that good men do nothing. Remember that when bad men combine, good men must organize. Nobody made a greater mistake than he who did nothing because he could do only a little  – Edmund Burke .

Spread the love(Genesis 50:14 (NIV) …14 For God shall bring every END_OF_DOCUMENT_TOKEN_TO_BE_REPLACED