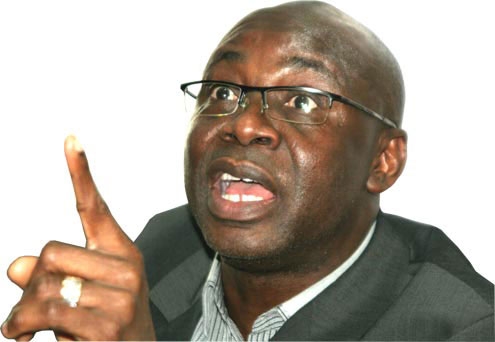 THEME: SANUSI LAMIDO SANUSI AND THE FEDERAL GOVERNMENT OF NIGERIA

Let me begin by interpreting for the non-Yoruba speaking people among the audience the Yoruba saying that forms the rider to this address. It simply means that when the owner of the farm fails to apprehend the thief in time, the thief will apprehend the owner and label him the thief.  The proverbial encounter between the farm owner and the thief aptly explains the drama that came to a climax this past week, precisely on Thursday, February 22nd 2014 with the suspension of the Governor of the Central Bank of Nigeria, Sanusi Lamido Sanusi on grounds of “financial recklessness and misconduct”.

The stage was set on September 25 2013 when Sanusi Lamido wrote to President Goodluck Jonathan accusing the Nigerian National petroleum Corporation (NNPC) of failure to repatriate $49.8 billion (about 8 trillion naira) into the Federation Account between January 2012 and July 2013. In essence, the CBN Governor had accused the NNPC of failure to account for 76% of the total value of crude oil liftings within the given period. The CBN Governor then recommended to Mr. President the following:

· That NNPC be required to provide evidence of all proceeds from crude sales diverted from the CBN and Federation Account;

· That crude oil liftings and swap contracts as well as financial transactions of counter-parties be investigated;

· That suspects in money-laundering transactions including but not limited to Bureaus De Change who are unable to account for hundreds of millions of dollars be prosecuted.

By December 10, about three months later, with the president failing to respond to or act upon Sanusi’s recommendations, the letter was leaked to the media and became a public document. However, on December 18 2013, at a joint press conference held by the Coordinating Minister of the Economy, Dr. Ngozi Okonjo- Iweala, Minister of Petroleum Resources, Mrs. Diezani Alison-Madueke, Sanusi Lamido and representatives of other relevant agencies, the figure was revised to $10.8 billion even though Sanusi, who later revealed that he agreed to the joint press conference just to calm nerves and avert a major crises, indicated that the revised figure was $12billion. NNPC, seeking to explain the shortfall, attributed it to subsidy claims, crude product losses and cost of strategic product storage.

Two months later, precisely on February 4 2014, appearing before the Senate Committee on Finance, Sanusi insisted that the NNPC was yet to remit $20 billion dollars of the $67 accrued to the country from crude shipped by NNPC between January 2012 and July 2013. He challenged the NNPC to prove that the shortfall was legally and constitutionally spent. Sanusi also insisted that $12 billion from domestic crude sales was yet to be remitted to the CBN and argued that the NNPC’s claim of deducting monies for the so-called kerosene subsidy is an admittance of serious infraction as data from the National Biureau of Statistics (NBS) show that there is no such thing as kerosene subsidy. He stated that these huge losses on the Federation Account was unappropriated for and amounted to $100 million dollars every month. He also reminded the nation of a 2009 presidential directive that was being flouted by the supposed kerosene subsidy. As for the NNPC claims on deductions for subsidy for Petroleum Motor Spirit (PMS), Sanusi maintained that since April 2012, NNPC’s rendered account to the Federation Account Committee has consistently shown that no deductions were made for PMS subsidy. While the NNPC had earlier claimed that $6 billion dollars of the missing fund was used to develop its subsidiary, the National Petroleum Development Company (NPDC), this unfolding drama has seen the NPDC denying receipt of such subvention from the NNPC. It has also seen the Senate revealing that “less than 10% of petroleum products outlets across the country sell kerosene at the alleged subsidized rate of N50 while the general price is not less than N150 per litre”. This unfolding drama which has only added to the growing number of indictments on the NNPC and the Ministry of Petroleum Resources with its untouchable minister is simply sequel to the 2011 fuel subsidy scam unveiled by the Farouk Lawan led committee report and may be aptly described as Kleptocracy Unlimited Part 2.  Although in both parts one and two of the unfolding drama, the accusers became the accused, whereas the first was a victim of sting operation, the second may have been a victim of delayed whistle blowing. In other words, Sanusi Lamido Sanusi, undeniably a crusader of truth and justice, may have blown the whistle indicting the very heads of the crime economy just too late. Aitete m’ole, ole m’oloko.

The picture of Okonjo Iweala, Diezani Allison Madueke and Sanusi at the December 18 2013 joint press conference and their subsequent appearance in the Senate Committees is reminiscent of the events surrounding the fuel subsidy saga about two years ago.  On December 22, 2011, at a Town Hall Meeting organized by the Newspaper Proprietors Association of Nigeria (NPAN), the trio, seated together, with smiling faces, jointly and spiritedly, as a tag-team, made a case for the removal of fuel subsidy based on the economics of the subsidy regime in which Nigeria, by subsidizing consumption, was exporting jobs to other countries and buffering the rich instead of the poor. As far as the corruption in the subsidy programme was concerned, the blame was rested squarely on the shoulders of the marketers and the conniving vague officials in various government agencies. No mention was made of that institution that had become the very embodiment of the cesspool of corruption in Nigeria. No mention was made of that institution through whose operations “the Nigerian state has become a big contract” (if I am permitted to use words once used by a man who was once on the side of truth but has become the mouthpiece by which the thief last Thursday accused the farm owner of theft, Rueben Abati). At that Town Hall Meeting where Sanusi Lamido sat with the petroleum minister who has, in the last three years, brazenly overseen the unprecedented looting, diversion and misappropriation of the nation’s resources and who has been indicted directly and indirectly by various reports, from the 2011 KPMG report to the 2012 Farouk Lawan Committee Report and from the 2012 Nuhu Ribadu Committee Report to the 2013 Nigerian Extractive Industries Transparency Initiative (NEITI) report, no mention was made of the NNPC that had become and still is the very symbol of the mountain of public  corruption in Nigeria.

When Save Nigeria Group raised the bar during the fuel subsidy protests and maintained that government-backed corruption fueled by NNPC was the main issue, perhaps a corroborating voice by the CBN governor would have added weight to the outcry. When the Farouk Lawan Committee Report was released and we demanded prosecution of the oil minister and top officials of the NNPC as well as other indicted agencies over the theft of N310 billion by NNPC on kerosene subsidy in spite of an official policy against paying subsidy on the product, over the theft by NNPC of N285b above the Petroleum Products Pricing Regulatory Agency (PPPPRA) recommendation, over an NNPC self-discount of N108b, over the fact that the 210,000 barrels per day the NNPC allocates to swap/off shore price out of its 445,000 barrels of crude allocated daily was not reflected in its differential claims to subsidy and over the payment of N999m in 128 times within 24 hours to some companies totalling N127.872b by the office the Accountant-General of the Federation among other gross irregularities, certainly, the corroborating voice of the CBN Governor would have sent tremors to Aso Rock. When some of our members insisted that the dollarization of the economy was fuelling corruption, a listening ear by the CBN Governor and appropriate monetary policy response might have incapacitated the subsidy racket.

Make no mistake about it, few men have the courage of Sanusi Lamido Sanusi. Few men have the aristocratic dignity of a man who time and again, while in public office, raised his voice against profligacy and monetary imprudence especially among the legislators and sometimes among the executive; perhaps, no serving government official has been as outspoken against misgovernace as the suspended CBN Governor, however, when the CBN, the Ministry of Finance, the Ministry of Petroleum Resources, the PPPRA, the NNPC and other agencies provided conflicting figures as to actual subsidy payments to the Adhoc Committee on the management of fuel subsidy, that may have been the opportune time to blow the whistle. Perhaps Sanusi Lamido Sanusi at the time did not have the facts he now has; perhaps, cautious and tactical in his fight against the corrupt system, he was conscious of the sensitivity of his office especially as regards the need to preserve the stability of the economy; perhaps, he had waited for a more appropriate time; whatever the case, aitete m’ole, ole m’oloko.

Nevertheless, it is better late than never. Now that the whistle has been blown and the blower has become the object of persecution, we remain where we have always been – on the side of God and on the side of truth and we stand by those who pitch their tent on this side. We will not shoot the wounded righteous soldier. In the midst of persecution, wounded they may be, let them rest on this side knowing that the arc of the moral universe may be long but it bends towards justice.

As the preacher says in Proverbs 11:21

“Though hand joins in hand, the wicked shall not be unpunished but the seed of the righteous shall be delivered”

Therefore, in his travail however severe it may become in the days ahead, let Sanusi Lamido Sanusi remember the words of William Cullen Bryant:

Th’ eternal years of God are hers;

But Error, wounded, writhes in pain,

And dies among his worshippers

Spread the loveThese are depressing times – stemming from different END_OF_DOCUMENT_TOKEN_TO_BE_REPLACED