Nigeria may revert to her old National Anthem 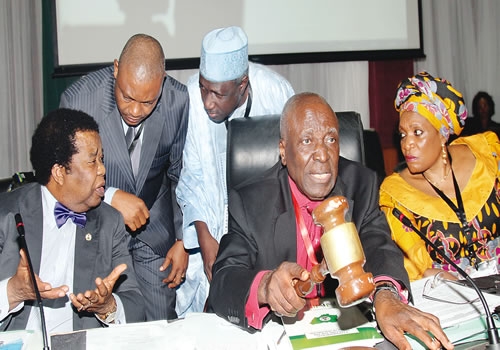 The National Conference on Thursday 3 July unanimously adopted a proposal that Nigeria revert to her old National Anthem, “which is a more credible symbol of unity, peace and prosperity”.

Instantly, delegates stood and in unison sang the first stanza of the old National Anthem which if adopted eventually, would become the new anthem.

The old anthem: “Nigeria we hail thee… our own dear native land; though tribe and tongue may differ, in brotherhood we stand’, was changed to the present one: ‘Arise o compatriots, Nigeria’s call obey…” during the military regime of General Olusegun Obasanjo in 1978.

Many Nigerians have expressed preference for the old anthem, as a better expression of the Nigerian spirit.

The Conference also resolved that henceforth, the office of the President of Nigeria shall rotate between the North and South and revolve among the geo-political zones.

These were parts of the resolutions adopted by the Conference while considering the Report of the Committee on Political Restructuring and Forms of Government; which attracted intensive debates and lots of amendments.

The Committee was mandated to primarily examine the extant structure and forms of governments in the context of the peculiar circumstances of Nigeria’s diverse and multi-ethnic setting.

It was also expected to examine Nigeria’s attendant challenges and the need to lay a solid foundation for an all-inclusive and cost-effective system of government which would serve the best interest of Nigeria and Nigerians.

Where the President dies in office, is incapacitated, impeached or where he resigns, Conference agreed that the Vice President shall operate in acting capacity for a period of 90 days during which an election to the same office would be conducted.

This decision was taken because each zone is expected to run the full course of the constitutionally allowed tenure without undue disruption; and it was also agreed that based on the adopted zoning formula, when a president leaves under any of the circumstances stated above, another president would be elected from the same zone where the previous one came from.

Spread the loveBuhari’ government through the ministry of finance took END_OF_DOCUMENT_TOKEN_TO_BE_REPLACED