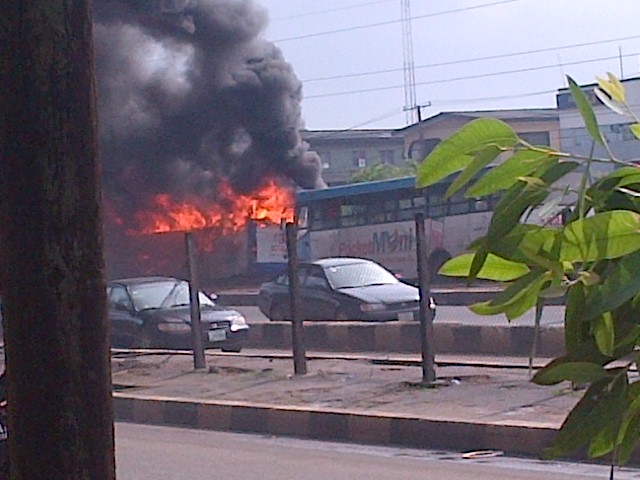 This morning a BRT bus hit and killed a soldier who was reportedly riding on a bike on the BRT lane. As a result of that tragic incident, soldiers are unleashing terror on the busy Ikorodu road.

The soldiers who expressed anger over the death of their colleague earlier blocked the road at palmgrove and vandalised every BRT in sight, causing a massive traffic. The drivers of the buses came out of their cars and escaped.

The windscreens of the buses were vandalised and at about 9.30am, soldiers began setting the buses on fire at palmgrove.

A journalist who attempted to take photos was severely beaten by the soldiers and had to be rushed to the hospital.

The Scoop counted at least 80 soldiers on the road between Onipanu and Palmgrove and pedestrians were required to raise their two hands as they passed to avoid beating by the soldiers.

Some other pedestrians who were making calls with their phones or even just holding the phone in sight were slapped and kicked and their phones seized or damaged.

At Palmgrove, there was a terrible scene as soldiers set a BRT bus on fire in the midst of four other BRT buses and just across an MRS fillong station. Vehicles passing by including fuel tankers stand the risk of being caught in the event of an explosion especially as there is a massive gridlock on the road.

Spread the love  “Life’s most persistent and urgent question is, END_OF_DOCUMENT_TOKEN_TO_BE_REPLACED