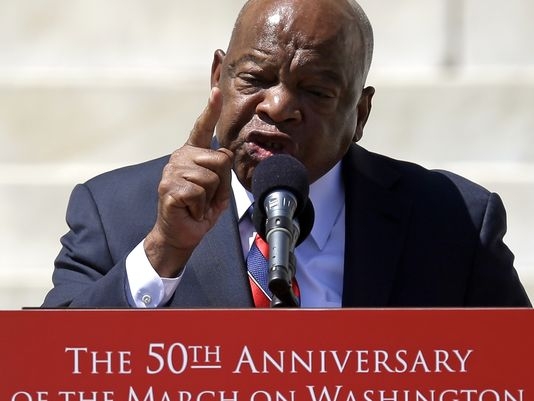 WASHINGTON – Clarence and Carrie Magee can still remember having to pay poll taxes and pass literacy tests while registering to vote in Hattiesburg, Miss. in the 1950s and 1960s.

The black college-educated couple paid the $2 tax and passed the quiz on Mississippi's constitution. But election officials repeatedly found reasons to keep them off the voting rolls.

Clarence, 81, and Carrie, 84, brought those memories of the segregated South with them to Washington on Saturday, joining thousands of other people at the Lincoln Memorial to commemorate the 50th anniversary of the 1963 March on Washington.

r to the young people that freedom is not free, never has been and never will be,'' said Clarence Magee, who still has the voter registration card he received in 1962 after a court required it. "If we don't nourish and protect the freedom we have today, it will be taken away.''

Saturday's anniversary march had special significance for residents of the Deep South, which was at the heart of the civil rights movement. It was there that civil rights activists, including Martin Luther King Jr., registered blacks to vote and staged sit-ins and boycotts.

"It's significant for us to see… what impact the struggle in the South has had, not only in the United States, but on other people from around the world,'' said Johnny Riley, Jr., 47, of Monroe, La.

The 1963 march, the venue for Martin Luther King Jr.'s "I Have a Dream'' speech, marked a turning point in the civil rights movement. By that time, the movement had gained momentum, particularly in the South.

Saturday's speakers highlighted what they said is the unfinished business of achieving a broader sense of equality in America, while also offering hope that much has and will change.

Lewis, a founder of the Student Nonviolent Coordinating Committee, worked throughout the South to register blacks to vote.

Although he acknowledged that the brutal days of civil right struggles are now gone, he said the push for a more perfect America remains.

"We must get out there and push and pull," he said.

"Our focus has broadened to include the cause of women, of Latinos, of Asian Americans, of lesbians, of gays, of people with disabilities. And of countless others across this great country who still yearn for equality," Holder said. "I know that in the 21st century we will see an America that is more perfect and more fair."

Organizers of Saturday's event said fighting discrimination at the voting booth is more important than ever because of the recent Supreme Court decision striking down a key provision of the Voting Rights Act of 1965.

They also worry about new state voter ID laws, including one in Mississippi, that they say will disenfranchise minorities.

Many civil rights activists also are upset about the acquittal of George Zimmerman in the shooting death of black teenager Trayvon Martin in Florida. The shooting focused new attention on race relations and state "Stand Your Ground'' laws.

Evers-Williams, 80, spoke from the steps of the Lincoln Memorial on Saturday, telling the crowd of thousands that it's important to turn the stand-your-ground phrase into something positive, as in, stand for "justice, for freedom, for equality."

"We are the trees standing tall for justice,'' said Evers-Williams, who had been scheduled to speak at the 1963 march but didn't make it.

Adell Brown, a native of Gilbert, La. who lives in Baton Rouge, recalled that civil rights activists were sometimes dismissed by the media as "a bunch of renegades trying to destroy the country."

"But we later understood they were very courageous people who had a real purpose,'' said Brown, 61, executive vice chancellor for research at Southern University's Ag Center.

Melvin Hollins, 69, who traveled to Washington from McComb, Miss., said activists want to maintain the gains made as a result of the civil rights movement of the 1960s.

McComb has a rich history in the movement, including a student walkout in 1961.

Much has improved in the South since the original March on Washington in 1963. Mississippi has the highest number of black elected officials in the country. Several southern cities, including Shreveport, La., Hattiesburg, Miss. and Jackson, Miss. have black mayors.

"The (1963) march was a hell of a success,'' said Charles Evers, Medgar Evers' brother, who didn't make the march. "We know the power we have because of the march. (But) it's never enough. We have to keep on marching and registering and voting. We have to start owning stuff.''

Amy Garner, 45, a native of Decatur, Miss., agreed with Evers that it's time for younger people to step up and continue the fight for civil rights. Garner joined her father, Walter Garner, a long-time activist, in traveling to Washington for the anniversary march.

"The challenge for us is to pick up the torch,'' said Amy Garner, who now lives in Atlanta. "We're losing too much ground.''