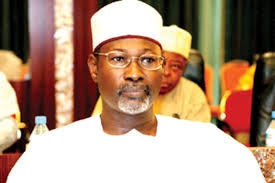 The Chairman of the Independent National Electoral Commission, Attahiru Jega, a number of Nigeria’s pro-democracy activists and U.S. policymakers will on Monday converge on Washington DC to review Nigeria’s electoral process and hammer out ways of making the forthcoming elections in the country fair and credible.

The programme, tagged “Nigeria Election Forum” is put together by the  Washington-based think-thank, the Centre for Strategic and International Studies [CSIS] in conjunction with Ford Foundation to discuss the state of preparations and the challenges ahead of the forthcoming elections in Africa’s most populous country.

A statement by the CSIS said the series, which is bringing together relevant Nigerian officials, civil society activists, opinion leaders and policymakers, will discuss the best ways of making the coming elections “peaceful, credible and free.”

The statement indicates the forum will start with participants identifying the major electoral problems to overcome before the elections and how the United States can be of help during the elections.

The Nigerian officials and activists will during the programme engage with U.S. policymakers and Africa experts on how best to ensure that Nigeria’s upcoming elections are peaceful, credible, and free.

The first session at the Forum will identify the big electoral roadblocks to overcome before 2015 and consider what the United States can do to support Nigeria as it enters a pivotal election period.

Elections in Nigeria have been bedevilled by corruption, large-scale rigging and violence since the return of civil rule in 1999.

The next general election will hold in February 2015, according to a recently released calendar by INEC.

According to the timetable, presidential election will hold on Valentine’s’ day, February 14, 2015, alongside elections into the National Assembly – Senate and House of Representatives.

The governorship elections in Ekiti and Osun have also been fixed for June 21 and August 9, 2014, respectively.

The release of the timetable is hugely significant, as it sets the reference point for other political activities around the 2014 and 2015 elections.

Spread the loveBuhari’ government through the ministry of finance took END_OF_DOCUMENT_TOKEN_TO_BE_REPLACED