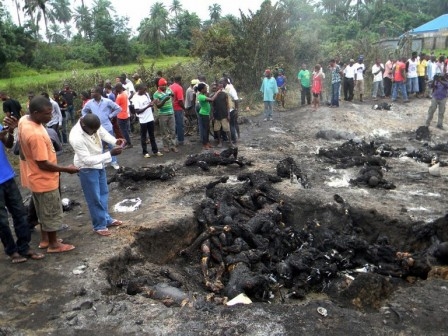 A multiple crash on the Potiskum-Maiduguri highway, involving three vehicles on Monday killed 35 people, including 19 church members on their way back from Lagos where they attended a religious meeting.

“All the 19 members of Redeemed Christian Church of God who were travelling in one bus were burnt beyond recognition as the bus caught fire on collision with the other two vehicles which also burst in flames shortly afterwards,” said Yusuf Sani, spokesman of the Federal Road Safety Commission in Yobe state.

“The victims in the other two vehicles were returning from a wedding.”

The spokesman blamed the collision, which occurred on the highway, on speeding.

an accident in which people were burnt to death

On Sunday, 20 traders returning from a local market were killed when the open van they were in collided with an articulated truck, Sani said, attributing the accident to “reckless overtaking”.

Sixteen of the 20 victims were girls who had been selling wares, he added.

Another 10 persons also died in another crash on the Lagos-Ibadan expressway.

On the Lagos-Ibadan Expressway crash, the Commander of Olympic Unit of the commission, Mr Tanya Adeoye, who made the confirmation, told newsmen in Ibadan that the dead were burnt beyond recognition.

He said that the bus, which was travelling from Ibadan to Lagos was rammed into by a truck while it stopped to allow another truck with registration number SW 175 EPE to pull out of a quarry.

He attributed the accident to speeding and dangerous driving, saying that “the commercial bus immediately went up in flames and the flames later spread to other trucks.’’

He said that the four people who sustained injuries were in the trucks and had been taken to the University College Hospital (UCH), Ibadan for treatment.

“The victims who were burnt beyond recognition were deposited at the Adeoye State Hospital mortuary,” Adeoye added.

He disclosed that the commission was making efforts to contact the families of the victims through the driver’s manifest which was not burnt.

Accidents are frequent on Nigeria’s poorly maintained roads due largely to speeding, overloading and reckless driving.

Spread the loveBuhari’ government through the ministry of finance took END_OF_DOCUMENT_TOKEN_TO_BE_REPLACED