When To Christianize And When Not To Islamize Nigeria-Joe Onwukeme 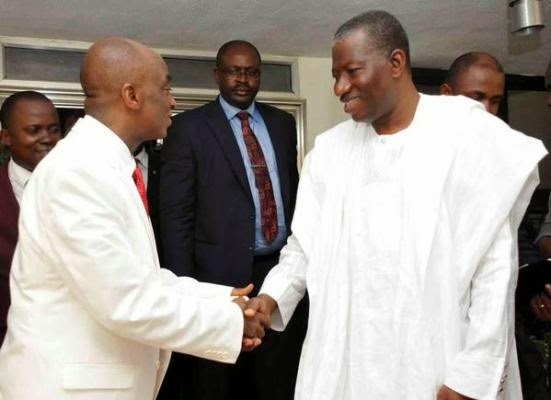 There's no doubt to the fact that religion and politics are like Siamese twins in Nigeria as far as politics is concerned even though our constitution both past and present proclaims the secularity of the Nigerian state.

We are again in the season of election, this is the time our politicians pretend to serve God. To gain cheap popularity and win the votes of Christians and Muslims, our politicians attend religious gatherings especially those with large congregation.

Sunday 23rd January 2015, the General over seer of Living Faith Church Worldwide also known as Winner's Chapel, in Ota Ogun state, Bishop David Oyedepo played host to President Goodluck Jonathan. Few hours after the president's visit, a different version of the bishop’s sermon went viral on social networks, "we will open the gates of hell on those who oppose you, when God enthrones you no one can dethrone you”.

The controversial Bishop was again in the news for the wrong reasons over such comments, until the real message of his sermon was revealed. The prosperity pastor, academician, business man, politician and author, told his congregation to stand up and pray for God to give the president the wisdom and understanding to rule Nigeria, from the report, some complied some didn't.

It is also not a hidden fact that Bishop David Oyedepo is a close confidant of the president and the president is using such to win the hearts of the fastest growing church in Nigeria and beyond in order to undermine the chances of the main opposition party APC whose vice presidential candidate, Prof. Osibanjo is a top hierarchy of Redeemed Christian Church of God.

After much criticism of his government, President Jonathan like the prodigal son is back again to ride on Christians to get majority of Christian votes as he did in 2011 in the presidential election.

Bishop David Oyedepo, who has become a frequent guest at Aso Rock villa in recent times has continued to show his support for President Jonathan's re-election, he has repeatedly preached his love for the president and on several occasions has told his congregation to pray for President Jonathan to be re-elected.

If it were General Muhammadu Buhari that went to a central mosque and the chief imam say Muslims should pray and support Buhari's presidential ambition, Christians clerics would have been busy telling their congregation Muslims have started plotting to Islamize Nigeria with their support for General Buhari.

In 2011 before the general elections, General muhammadu Buhari in a book launch somewhere in Sokoto state was reported to have told the audience which were mostly Muslims to vote for someone who will protect their interest. General Buhari was misquoted by the cabal that desperately wanted president Jonathan to become president, they said it was a ploy by General Buhari to Islamize Nigeria, before the general will come out and defend himself, the message had gone viral, Christian clerics didn't help either, it increased christian belief in the allegations that General Buhari is an extremist that is coming to Islamize Nigeria if voted into power, the allegation contributed to Christians not voting for General Buhari in 2011.

Another general election is here again and General Muhammadu Buhari is also in the race for the presidential election and some ignorant Christians are still of the opinion that a vote for general Muhammadu Buhari is a vote to Islamize Nigeria. Some Christians have this notion that no Muslim is qualified to rule this country and I keep asking how possible it is in a multi religious nation? What has a Christian done differently? What were the opinions of these same Christian clerics when Umaru Musa YarAdua emerged presidential candidate of PDP in 2007?

Our president has shunned the secularity of our nation state by aligning and publicly displaying his support for his religion as against the neutrality of our nation which our constitution portrays.

On several occasions president Jonathan has led high delegation of friends, family and religious groups to Jerusalem for pilgrimage.

He is now publicly attending different churches across the federation claiming his mission is not for campaigns but for their collective prayers for Nigeria.

To my fellow christians such public display of the president's religious activities is not enough to call him a religious extremist with an intention of christianizing Nigeria.

All these opportunists parading themselves as clerics around president Jonathan does not want the ordinary Nigerians to live well via good leadership and governance. They prefer the wicked and corrupt cabal that Jonathan represents so that they can be deceiving the people that devil is the problem. Devil is not the reason Nigerians are suffering. The reason is bad leadership which some General overseers, Bishops Pastors, Imams, Babalawos, etc are all benefiting from.

How many of the pastors that are telling us to vote for president Jonathan have our interest at heart? How many of them have children who are unemployed graduates sitting at home?

Our clerics have failed in their responsibility in speaking the truth for fear or lack of patronage. When Fr. Ejike Mbaka spoke his mind about the impunity of PDP led government, his fellow Christian clerics accused him of collecting bribe from the opposition to ridicule the ruling government, they were not interested in the content of his message. The hypocrisy of some men of God towards politicians is why some adherents of other religions don't really take some of these men of God serious.

If General Muhammadu Buhari eventually wins the February 14th presidential election, same men of God that have joined president Jonathan at the Augean stable will still be the first to go identify and pray for the general.

We lack men of God with the fear of God, what we have are religious jokers that live off the mystery of their congregation and identifies themselves with any government in power.

For a christian in authority to shun the constitution and display acts capable of causing religious crisis is not a plan to Christianize Nigeria, if it is a muslim, similar acts will be perceived by Christians as plans to Islamize Nigeria.

That is the level our ignorance has degenerated to, nobody is asking what have you done in 6 years to warrant another four years in office, nobody is asking how will you balance your leadership in a multi ethnic and religious country that a particular region or religion will not complain of marginalization. We are more interested in mundane things like religion, history, academic records etc.

The part of divisiveness bedeviling us as a nation is at its peak, the nation is so polarized between the two major religions, Christians and Muslims. The rivalry is so intense that any spark of light in the already charged atmosphere may consume the nation.

From North to East, West to South, the general opinion is people are relocating to their villages before the general elections for fear of the uncertainty, many are disenchanted with the government but some politically demented supporters of the ruling government are yet to see how deeply divided we have become as a nation. Nigeria has never been this divided the way it is right now. That is the level our politicians has reduced us to, through their various propaganda against each other's religion.

We lost it as a nation when people started seeing themselves and their religion as superior to others. No ethnic group or religion is less superior. Respecting each other's religion should be sacrosanct.

Let our conscience be our guide.

"Those who eat from the table of Ahab cannot bring convincing message to Ahab". Pastor Tunde Bakare.

Spread the loveAs the nations of the world endeavor to END_OF_DOCUMENT_TOKEN_TO_BE_REPLACED