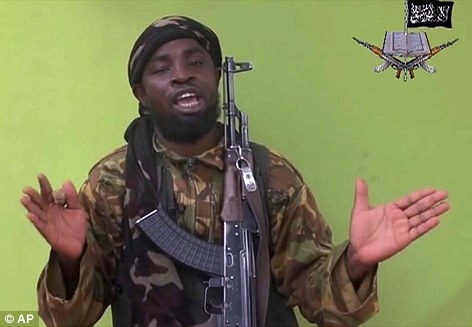 These are the names and faces of some of the more than 200 Nigerian girls who were abducted from their school dormitories eight weeks ago.

Each girl has a story, a future they had planned, a family anxiously waiting for them at home.

I was shown these pictures after visiting Nigeria this week. I met the leader of the community council in Chibok, the town from which the girls were abducted.

Slowly and with tears in his eyes, he flicked through a file in which he had recorded the names and photographs of the girls. They are unable to finish their exams, unable to find a safe place to study near home and are still in fear of another attack from Boko Haram. They have lost a year of their schooling and they are traumatised by the kidnapping of their friends.

For a teenage girl, eight weeks in captivity could have life-time consequences — and for their families it is torture. The idea that your daughter should go to school one day and never return is every parent’s nightmare. Not to know whether they have been molested, trafficked or are even alive is a living hell.

These girls were abducted for the sole reason that their captors believe that girls have no right to an education.

These girls were abducted for the sole reason that their captors believe that girls have no right to an education. Above, a still from a video released by Boko Haram of the teenagers in captivity

Yet this civil rights struggle is being fought out, brutally and — for most of the time — shamefully unobserved.

On one side, terrorists, murderers, rapists and cowards, hell-bent on acts of depravity. On the other, defiant, relentless, brave-beyond-comprehension young girl-heroes and boy-heroes desperately fighting for a future but, sadly, in a world largely oblivious to their plight.

In Britain and in the United States, we do find out. We do learn about abuse and horror from across the globe and we do react. But it’s often too late, and then, inevitably, it’s always too little. We should not fail young people, but it seems like we always do.

But we can’t forget. We owe them. We can’t give up because they won’t have given up. During the past eight weeks, the world’s attention has been drawn to India, where a gang raped and then hanged two girls seen as property to be passed around 28 Indian youths.

There has also been public outrage at the death sentence over a young Sudanese mother simply because a woman is considered to have no right to her own religion.

And this week, in Iraq, extreme Islamists are fighting for demands that include changing the constitution to legalise marriage for girls as young as eight.

The killings, the rapes, the mutilations, the trafficking and the abductions shock western eyes because the assaults seem so out of the ordinary.

However, they are not isolated incidents, but part of a pattern where the violation of girls is commonplace. A pattern where girls’ rights are still only what rulers decree and where girls’ opportunities are no more than what patriarchs decide.

Consider this. This week, and every week, at least 200,000 school-age girls in Africa and Asia — many just ten, 11, 12 or 13 years old — will be married off against their will because they have no rights that can stop this occurring.

Thousands more will be subjected to genital mutilation because they have no power to stop a practice designed to make them acceptable as child-brides and for adolescent childbirth.

And girls as young as eight, nine and ten will be in full‑time work, down mines, in factories, working the fields and in domestic service. Many will be trafficked into prostitution as part of a subterranean world of slave labour.

They are children who have a right to be at school. Today, almost 70 years after the Universal Declaration of Human Rights, we are in the midst of a liberation struggle that has yet to establish every girl’s right to life, education and dignity.

It is girls themselves who are doing more than the adults to demand their rights. A few weeks ago I spoke to 2,000 girls in Pakistan, where, in 2012, schoolgirl Malala Yousafzai was shot in the head by Taliban gunmen after speaking up for the right of girls to be educated.

I had found girls who were angry but cowed into submission.