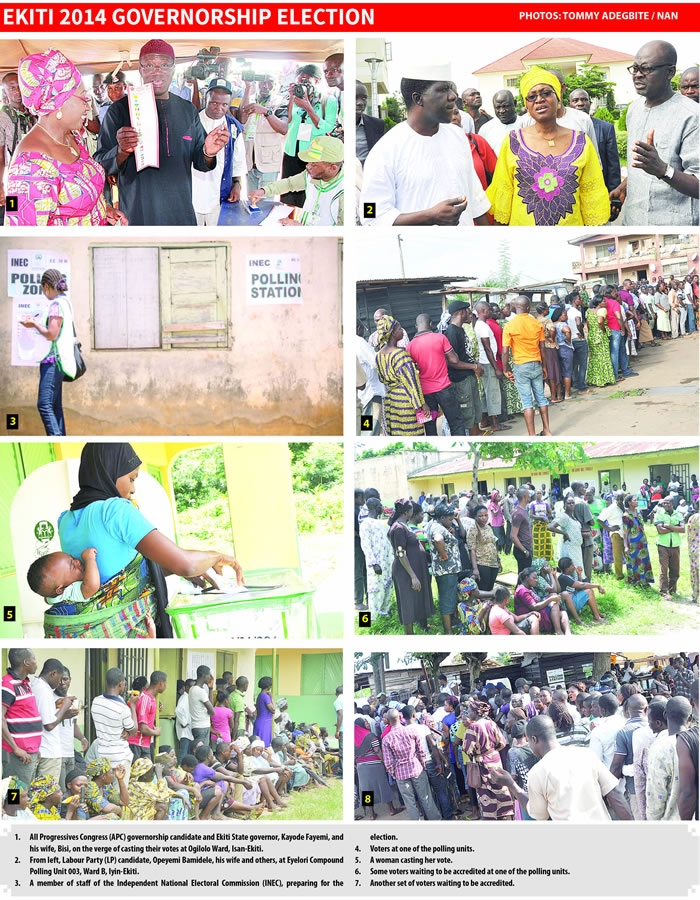 An admixture of jubilation and suspense is trailing the ranks of the three frontline candidates in the governorship election conducted in Ekiti State on Saturday.

Ado-Ekiti, the state capital, was agog with celebration as some of the residents, who found the election result favourable, trooped to the streets to celebrate it.

Although the election was largely peaceful, the presence of law enforcement agents created further security for the election, which saw a large turnout of voters in all parts of the state.

Reports from other major cities spread across the 16 local government areas in the state also indicated subdued celebrations, even as the Independent National Electoral Commission (INEC) awaits collated results from the three senatorial districts in the state to make official announcement.

Some of the council areas that witnessed celebrations included Ado Ekiti, Ekiti South West, Ise/Orun and Emure, with the jubilant crowd shouting the slogan of one of the candidates of the party.

While the supporters of some key political gladiators in the state were effusive with joy, the loyalists of others betrayed emotion through mournful looks.

A lot of them were seen in clusters discussing in hushed tones on the election, which generated much public interest as the nation prepares for 2015 general election.

As at the press time on Saturday, some parts of the state had been turned into a epicenter of pulsating celebrations with law enforcement agencies still keeping surveillance on the city, just as police helicopter remained on regular reconnaissance.

There were no cases of breach of public peace throughout the duration, neither was there any official report of such in the election which began with accreditation of voters by 8 a.m. while voting commenced at 12.30p.m.

Apart from parts of Ado-Ekiti, there was no obvious presence of soldiers in other cities during the election, but regular and riot-policemen, as well as members of other security agencies and the Nigerian Security and Civil Defence Corps (NSCDC) were on ground in virtually everywhere.

Fayemi commends INEC, decries arrest of APC members
Ekiti State governor and the candidate of the All Progressives Congress (APC) in the election, Dr Kayode Fayemi,  described as the election as “peaceful,” and commended INEC for the early arrival of election materials in the various polling units in the state.

Governor Fayemi, who spoke with newsmen after casting his vote at unit 001, Ogilolo ward, Isan-Ekiti, in Oye Local Government Area of the state, however, decried the late arrival of security men at some polling centres in the state.

According to him, the early commencement of accreditation was an improvement over Anambra election, noting that, “if things continue like this, its a good sign for Nigeria.”

The governor decried what he described as “the indiscriminate arrest of members of APC,” saying this was not good for democracy.

He condemned those he described as “busy body” whom he said had no business in the election but going about on streets with security people to harass the people.

He said, “We are concerned that some people who don’t have anything to do with this election are going about with security men intimidating us. I have reported them to the appropriate authorities and I hope those concerned would be checked.”

The governor also condemned the arrest of some journalists by security men and escorted out of the state, saying it was a dent on the nation’s democracy.

Governor Fayemi said the duty of journalists was to inform the people about the election, saying stopping them from doing their work was unconstitutional.

He said journalists, the world over, operated without borders, adding that they should not have been stopped in the performance of their work.

He, however, encouraged the people not to be deterred but to vote and stand by their votes.

“This is the right time to speak with their votes and reject what they don’t want.”

His wife, Erelu Bisi, also commended the timely commencement of the exercise, but lamented the influx of those she said had nothing to do in the electoral process.

An observer with Department of International Development (DFID), Mrs Fagboyo Margaret, described the exercise as a great improvement over past elections in the country.

She noted that accreditation started early in areas such as Ido, Oloje, Isan and Ado visited by her team. “What we saw is an improvement over past elections,” she added.

Fayose  alleges purchase of votes, says ‘I leave everything to God’

Fayose, who spoke after casting his ballot at his Afao ward in Irepodun/Ifelodun Local Government Area of the state, alleged that “A deputy governor and a former governor of the state were going round with cash”, alleging that they were inducing voters.

He said, “I’ve done my civic duty, but I am very disturbed by the level of violence and I am equally disturbed by the level of money being shared at the polling units. This is alien to our democracy. I’m surprised that a deputy governor and a former governor can be going from one polling unit to another, carrying cash, and in some cases, they’ll give you a phone to use the camera to show how you cast your vote, you show them the picture and they give you money.”

He described the development as “unfortunate,” saying “money in this game will destroy so many things and destroy our future.”

On his chances in the election, Fayose said, “I have remained in my house and I have left everything to God. Whicever way it goes, I have taken it that every good gift comes from God Almighty. I have put in my best in the campaigns and I will now leave the rest to God.”

He told newsmen that “For now, I am okay with the situation. The accreditation of voters was peaceful, the turnout encouraging and I hope the situation would continue like this and make the whole process credible in the long run. There has not been any reported case of our people being harassed or intimidated. I am hoping that we will get to the end of the exercise still feeling satisfied with the process.”

Speaking on the heavy presence of security men in the state for the election, Bamidele said it was “the right thing to do,” noting that “anyone who was here in Ekiti during the last 90 days of campaign and saw what happened will see a justification in the massive deployment of security agencies in Ekiti for this election.”

He, however, noted that “As a democrat, I really believe that it is a tragic aspect of the growth of our democracy. This is a democracy that has remained nascent for too long,” saying, “bringing soldiers to come and participate in the electoral process only goes to show the extent of growth of our democracy. It is not just about Ekiti, it is about us as a people and as a nation.

“At best, what we have can be described as a civilian rule. This is not democracy in the real sense of it but the transition to democracy has just begun. But the civilian rule we have is much better than the military rule that we all rose up against, but hopefully we will be able to attain the level of democracy where we  cast our votes on the streets and the soldiers will remain in the barracks.”

Violence at Iyin Ekiti
There was violence between supporters of Peoples Democratic (PDP) and All Progressives Party (APC) at 007 polling unit, Odole Compound, Iyin-Ekiti, Ifelodu/Irepodu Local Government area of the state.

Sunday Tribune gathered that party thugs loyal to APC tried to prevent voters, especially from opposition parties, from being accredited.

The timely intervention of the officials of Nigerian Security and Civil Defence Corps (NSCDC) and operatives of the Department of State Securitym (DSS) saved the situation.

The PDP agent at the polling unit, Faromika Ayodeji, alleged that the Chairman of Ifelodu/Irepodu Local Government Area, Iyin-Ekiti, General Oluafemi Tajudeen (retd), who mounted the polling unit, tried to prevent those he identified as members of opposition parties from  doing accreditation.

He said specifically that Tajudeen was not allowing electorate loyal to the PDP to be accredited.

Ayodeji also complained that as an agent, he did not know the number of accredited voters.

The chairman, however, refuted the allegation, saying he only intervened in trying to resolve the crisis that erupted at the polling unit.

Also, an APC party agent, Awe Nurudeen Olawale, insisted that his party was not responsible for the crisis.

Deputy Commandant of NSCDC, Mr Evans Ewurum, who led his men to the scene advised Tajudeen and other parties in dispute not to allow the situation to escalate, saying the election should not be seen as a do or die affair.

He warned that the Federal Government had invested so much in the election, noting that it should be a test-case for 2015 election and that individuals or group would not be allowed to disrupt the exercise.

Spread the loveThese are depressing times – stemming from different END_OF_DOCUMENT_TOKEN_TO_BE_REPLACED

Previous Post The haunting faces of Nigerian schoolgirl hostages the world has forgotten-Brown
Next Post ‘Fayose’s victory , a reflection of grassroot politics.