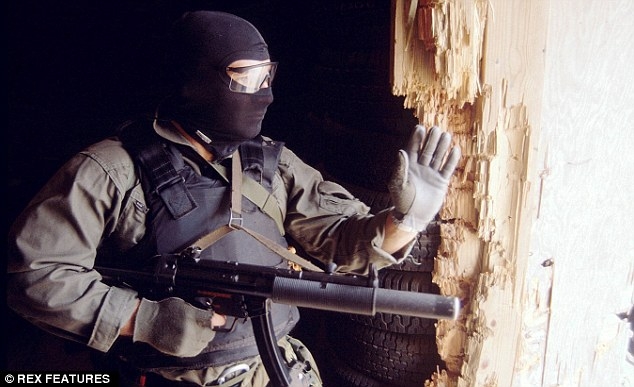 U.S. Special Forces have killed a top ISIS commander in charge of their lucrative oil business, and captured his slaver wife in a dramatic overnight raid.

Elite forces stormed a residential building in the Syrian city of Deir Ezzor, killing 12 jihadists in hand-to-hand combat before claiming the scalp of Abu Sayyaf, the twisted regime's 'oil minister'.

Terrified militants tried to use women and children as human shields as the American troops advanced, but Pentagon officials said the raid was pulled off with no harm to civilians. Daring raid: US special operations forces have killed top ISIS commander, Abu Sayyaf, in a raid in Syria and captured his wife who ran a human trafficking network which traded Yazidis (file photo) Air raid: Defense sources say that troops were dropped into combat during the mission, which used Osprey tilt-rotor aircraft such as the one above Chopper attack: Black Hawk helicopters are also thought to have been used in the overnight raid

Though the original aim was to take Sayyaf alive, the soldiers killed him when he tried to fight back.

They recovered laptops and cell phones which could provide an insight into ISIS's oil-smuggling operations, which bring in vast wealth for the terrorist organization.

His wife Umm Sayyaf, was captured in the raid and is now in military detention. It is believed that she was involved in ISIS's slave-trading operation, and sold members of the oppressed Yazidi minority into slavery.

She was taken back to a detention facility in Iraq. It is unknown what will be done with her, but she will not be sent to the American facility in Guantanamo Bay, Cuba, a Pentagon spokesman said.

No American forces were killed or even injured in the night-time attack, though at least one Black Hawk chopper was riddle with bullet holes as ISIS forces tried to retaliate.

The raid was followed up with a coalition airstrike on oil fields near Deir Ezzor, which Syrian state media says took out a further 40 extremists. Pentagon chief Ashton Carter hailed the raid as a triumph.

He said: 'The operation represents another significant blow to ISIL, and it is a reminder that the United States will never waver in denying safe haven to terrorists who threaten our citizens, and those of our friends and allies'.

ISIL is the Obama administration's preferred term for ISIS. According to the White House, Sayyaf was involved with IS military operations and had 'a senior role in overseeing ISIL's illicit oil and gas operations.' U.S. special forces have killed a top ISIS commander in a secret raid in Syria and captured his wife who is responsible for trafficking Yazidis (file photo)

A spokesman said that the raid was carried out with the blessing of Iraq's government, while the Syrian regime of president Bashar Assad was not consulted.

The ground raiding party also managed to release a female Yazidi slave in the confrontation. Officials say she will be reunited with her family.

She is thought to have been part of the slaving operation run by Sayyaf's wife, who is now the first U.S.-held detainee in the war against ISIS .

Reports state that she was a leading figure in ISIS's human trafficiking operation, which targets the Yazidi minority who live in norther Iraq.

The group, whose idiosyncratic beliefs are based on Christianity, have been killed, raped and enslaved en masse by ISIS militants, who consider them devil worshippers.

His wife, Umm Sayyaf, controlled human trafficking for the terrorist organisation which included selling Yazidis, the Christian group from the North of Iraq.

She is the first US-held detainee of the war against ISIS. The question of whether she could be sent to Guantanamo bay was raised, but a Pentagon spokesman said that would not happen.

A young Yazidi woman who had been kept as a 'slave' by the pair was freed in the dramatic raid and she will be reunited with her family.

ISIS extremists have killed, raped and enslaved thousands of Yazidis as they consider the group to be devil worshippers. Coalition warplanes carried out airstrikes in the al- Omar oilfield in Deir Ezzor, which Sayyaf is believed to have controlled

Bernadette Meehan, the National Security Council spokeswoman, said President Obama had authorized the raid 'upon the unanimous recommendation of his national security team'.

'We are working to determine an ultimate disposition for the detainee that best supports the national security of the United States and of our allies and partners, consistent with domestic and international law,' Mrs Meehan said.

'We will follow our usual practice with respect to giving the International Committee of the Red Cross notification and access to the detainee.' Syrian media reported at least 40 ISIS fighters were killed in the attack at al-Omar oil field, pictured a still from a video showing armed men outside is believed to be the same oil field in July last year (file photo)

There is reason to believe that Abu Sayyaf may have been in contact with ISIS leader Abu Bakr al-Baghdadi, sources familiar with the operation told CNN.

Spread the loveBuhari’ government through the ministry of finance took END_OF_DOCUMENT_TOKEN_TO_BE_REPLACED