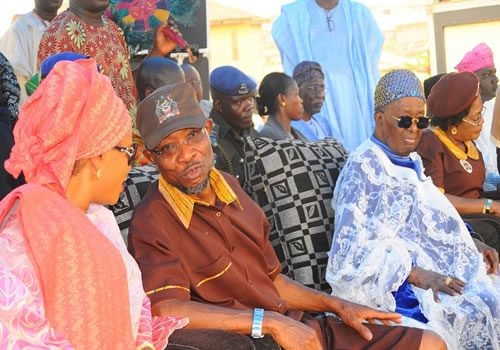 Aregbesola, on Tuesday, in Ile-Ife, said that the new educational policy of his administration did not have any religious motive or undertone, saying his critics should desist from turning the education of Osun children to petty squabbles through undue castigation.

He asserted that “let me repeat for the umpteen time that our effort at revamping education never had a religious motive. We are motivated by the highest ideal of developing a complete personality who will be an asset to the society as he would be for himself.

Speaking at the formal commissioning of Baptist Central Elementary School, Ilare, Ile-Ife, held at the school premises, he noted that his government had committed N14.4 billion on capital projects, while recurrent annual expenditure was N21 billion on elementary schools.

He pointed out that works and spendings were  still going on and will not stop until the administration achieve its goal of making public schools in Osun where pupils can get the kind of education that will place them at par with the very best in the world was achieved.

According to the Aregbesola, “what we have brought to education in Osun, if we will not sound immodest, amounts to a revolution. Critics who will be honest should compare this new school and its facilities to what obtained when they went to school and what public schools have become of recent.

“What we want to achieve is a total man that understands life as an endeavour to add value to society through application of self for the benefit of all. We are clearly neutral on religious observances. It is this neutrality that is the root of the absurd stigmatisation”, he remarked.

While contending that if politicians were genuinely interested in the future of Osun children, they will bury their narrow concerns of today in order to assure children a glorious tomorrow, Aregbesola said progress and advancement were the desires of every human society, and that these are brought about by persistently confronting and providing solutions to societal problems.

Spread the love  “Life’s most persistent and urgent question is, END_OF_DOCUMENT_TOKEN_TO_BE_REPLACED