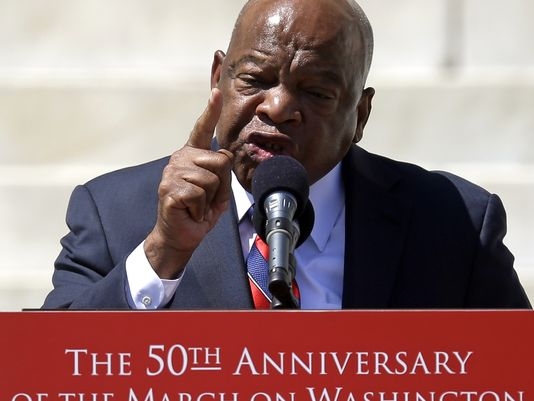 Lewis, 73, is the sole surviving speaker from the original March on Washington. Thousands of people came to Washington on Saturday to retrace the steps walked by Martin Luther King Jr. 50 years ago, and to hear speeches from Lewis, Attorney General Eric Holder, Al Sharpton and others.

MORE: Civil rights in America: Connections to a movement

President Obama will speak Wednesday on the actual anniversary of King's "I Have a Dream" speech.

In his remarks Saturday, Lewis exhorted the crowd gathered along the National Mall to not give up and to continue making strides toward King's dream of racial equality.

Top Shelf Productions, which published March: Book One, heralded the best-seller list news on its website and said the graphic novel is "on its way to becoming a bona fide phenomenon." No doubt interest in the 50th anniversary on the March on Washington helps, too.

Previous Post Julian Bond: March’s unmet challenges, 5 decades later
Next Post Getting to march could be risky and demeaning journey