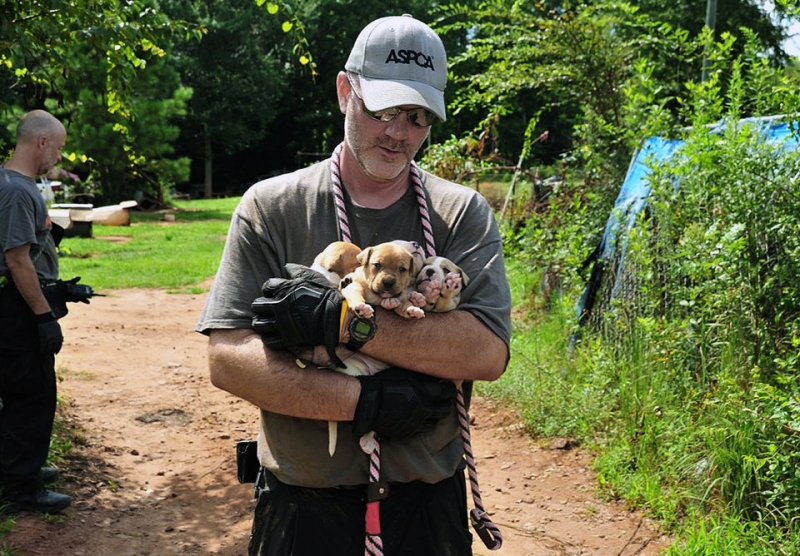 MONTGOMERY, Ala. (AP) — An investigation into organized dog fighting and gambling in the Southeast resulted in 12 arrests and the seizure of 367 pits bulls in one of the nation's largest crackdowns on the bloody exhibitions.

Federal, state and local officials announced the arrests Monday. They stemmed from raids Friday on homes in Alabama and Georgia and the seizure of more than $500,000 in cash that investigators believe was tied to illegal gambling on dog fights.

"I believe if Dante were alive today and rewriting the 'Inferno' that the lowest places in hell would be reserved for those who commit cruelty to our animals and to our children," U.S. Attorney George Beck said at a news conference.

Court-appointed attorneys for some of the defendants said they plan to plead not guilty at an arraignment Wednesday.

The defendants are charged with conspiring to promote and sponsor dog fights and arranging for dogs to be at the fights in several south and east Alabama counties and in Holly Springs, Miss., between 2009 and 2013.

Most of the defendants also are charged with conducting an illegal gambling business. In an indictment returned by a federal grand jury in Opelika, one defendant is accused of winning $35,000 at a dog fight in Waverly in August 2011. Two others were stopped by officers with $12,000 in cash after attending a dog fight at a bar in Macon County in February 2012, the indictment said.

Federal, state and local officials simultaneously served search warrants Friday to make arrests and seize dogs in Alabama, Georgia and Mississippi. Coffee County Sheriff David Sutton said the dogs at one Elba home were covered by fleas and were secured by heavy chains connected to car axles buried in the ground. Officials said some pit bulls were so malnourished their ribs were sticking out and others had bad wounds that required emergency care.

"Those animals can't speak like you and I," Sutton said. "They bark and they whine. We chose to speak for them, and I believe we sent a message out. …. If you do the crime, we are going to come see you."

Officials with the American Society for the Prevention of Cruelty to Animals and the Humane Society of the United States said the organizations are caring for the animals at undisclosed locations, and the animals will have to be kept as evidence while the case progresses. Eventually, they hope to retrain the dogs and get them new homes.

"They are finally getting a loving hand from responders who care for these dogs, but sadly there are many other dogs out there going through this type of abuse," ASPCA vice president Tim Rickey said.

Rickey said the case was among the largest ever and was as significant as the largest known seizure of nearly 500 dogs in Missouri and four and surrounding states in 2009. That case became known as the "Missouri 500."